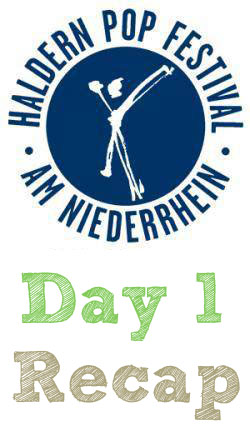 There are thousands of festivals in Europe, particularly in the summer time, but none quite like the Haldern Pop festival, in the Lower Rhine of Germany.  In it’s 27th year, you’d think the word would spread a little more – because this festival is something more than special.  Spectacularly set on country grounds in the Rees-Haldern area, not too far from the Dutch border, thousands flock to witness the spectacular shows put on some of the worlds greatest artists – notably Beirut, Mumford and Sons and closers The National this year, alongside up and coming rising stars from around the globe.  A festival that sells out almost instantly, it’s not just the punters who return year after year, but the bands, such is the magical atmosphere.  Set alongside a lake, amongst the greenest grass, despite the big names – past bands have included Muse, Franz Ferdinand, Kelis – this festival is renowned for its cozy atmosphere, with only a maximum capacity of around 5,000 – which aims to stay that way – much to the delight and merriment to any who have experienced the Haldern magic.

QRO Mag had the wonderful opportunity to experience this distinguished festival-and because of it’s size and it’s relative unknown status globally, Haldern still attracts those who tend to be truly passionate about music- something which is unfortunately a little questionable for other ‘music’ festivals on a global scale.  With an outstanding line-up, there was much to write home about, rather than shaggy-haired, Ray Ban-clad, checkered shirt, drunken fools, but the spectacular show of musicianship throughout the three-day festival set mainly set over two stages. 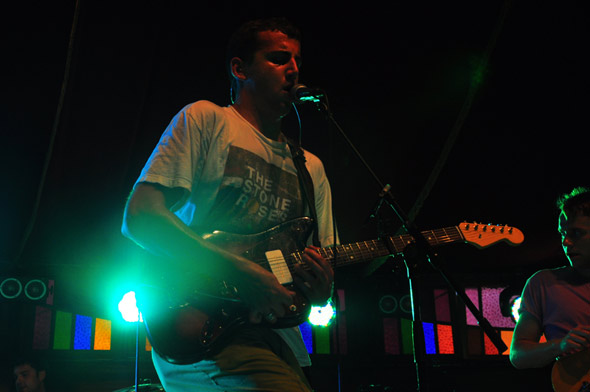 Click here for photos of Cymbals Eat Guitars at 2010 Sasquatch! in George, WA in the QRO Concert Photo Gallery

Click here for photos of Cymbals Eat Guitars at 2010 Harvest of Hope Festival in St. Augustine, FL in the QRO Concert Photo Gallery

Click here for QRO’s review of Cymbals Eat Guitars at The Troubadour in Los Angeles, CA on September 19th, 2009

The opening day of the festival, all but one stage – the Speigeltent – was open, an intimate tent with a draped velvet lining to the roof and coloured glass windows, the venue almost encapsulating the very essence of the festivals sentiment.  With questionable weather, the tent was packed throughout the day as festivities kicked off with New Yorkers Cymbals Eat Guitars.  Performing a mix of songs from their 2009 debut album, Why There Are Mountains (QRO review), and unreleased tracks from their forthcoming release, Cymbals Eat Guitars warmed the crowd slowly into the festival spirit.  Despite a strong vocal, easily listenable elements and an engaging, very sweaty performance from the band – although technical problems due to the rental of equipment caused slight problems – it would seem the crowd would need some warming up.

It’s rather more likely that many in the crowd were unfortunately trying to escape the rain, but one should hope that the solid, layered sounds of Cymbals Eat Guitars was enough to keep the wet ones entertained. 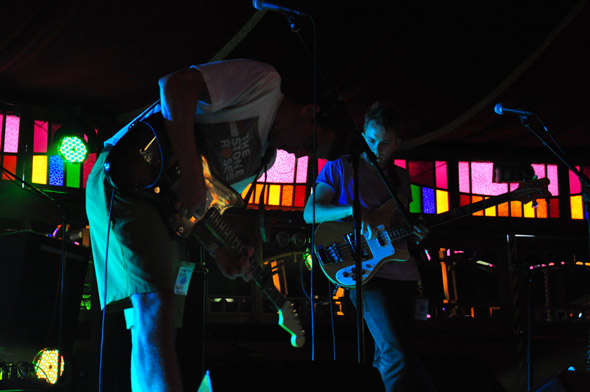 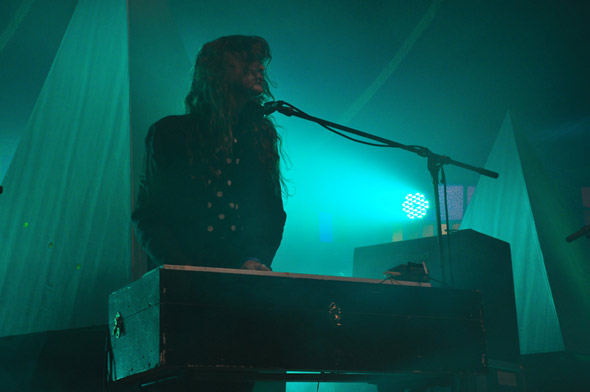 Click here for photos of Beach House at The Engine Room in Tallahassee, FL on April 25th, 2010 in the QRO Concert Photo Gallery

Click here for photos of Beach House at Williamsburg Waterfront in Brooklyn, NY on August 30th, 2009 in the QRO Concert Photo Gallery

Click here for photos of Beach House at 2008 Siren Music Festival on Coney Island in Brooklyn, NY in the QRO Concert Photo Gallery

Click here for photos of Beach House at Museum of Fine Arts in Boston, MA on June 9th, 2007 in the QRO Concert Photo Gallery 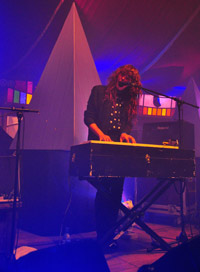 It’s also rather likely that many were waiting for one of the most anticipated bands of the weekend – French-born Victoria Legrand and U.S.-born Baltimorean Alex Scally, the collective duo known as Beach House.  After forming in 2004, they have been considerable fast rise to the top, with recognition from some of the most renowned critics, including that of the notorious Pitchfork, as well as reaching commercial success.  It’s easy to see why Beach House have reached the heights they have, and despite their label of ‘dream pop’, Beach House seemingly have much darker, melodic elements to their music.  With a good showcase of existing material, Legrand performed with an impeccable vocal despite what only can be described as ‘hair head-banging’ – but as both Legrand and the rest of the performing band became increasingly disheveled, so did the audience, who were clearly enjoying the intensity of the showcase, aided by rather strange large triangular stage props and light show.

One did not have to know the tracks to enjoy the show – as it was apparent the crowd varied from avid fans to those who lacked familiarity, which perhaps is a true indicator of talent, and also lucky for Beach House who have been snapped up by other keen artists who have already reached commercial success as touring support, such as The National (see Day Three) and Vampire Weekend (QRO live review).  Lucky are those who caught Beach House in this meager venue – because big things are fast coming. 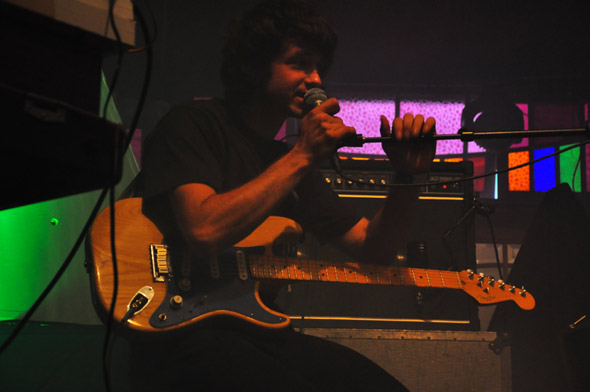 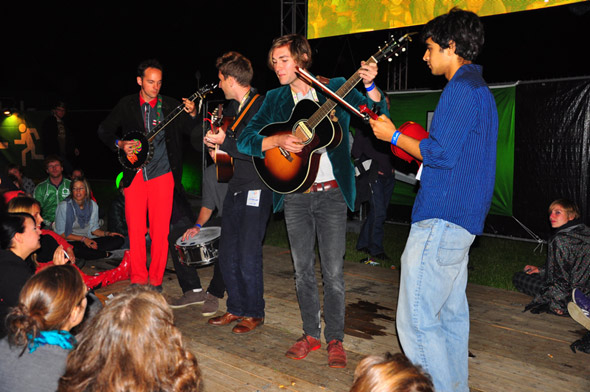 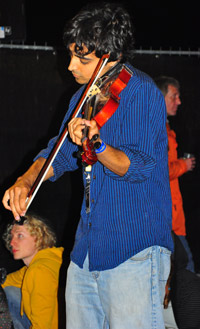 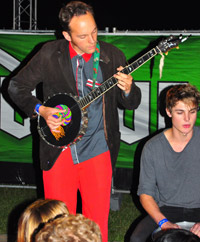 As the night progressed and the ambience was indeed building, the beer flowing and the atmosphere growing – an expected surprise should appear!  From the Speigeltent should emerge Stornoway, equipped with acoustic guitars and a single drum.  Playing four songs off their debut album, Beachcomber’s Windowsill, with absolutely no amplification, the majority-unsuspecting crowd seemed a little unimpressed, whereas a handful seemed rather over joyous.  It was enjoyable by any means – and it presented Stornoway in their element: organically, which would, judging by their lyrics, seem like something they’re very much into. 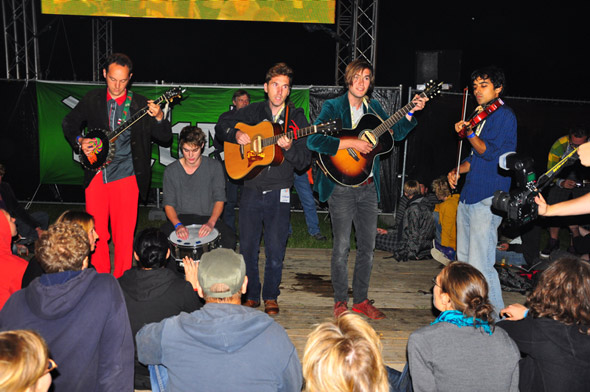 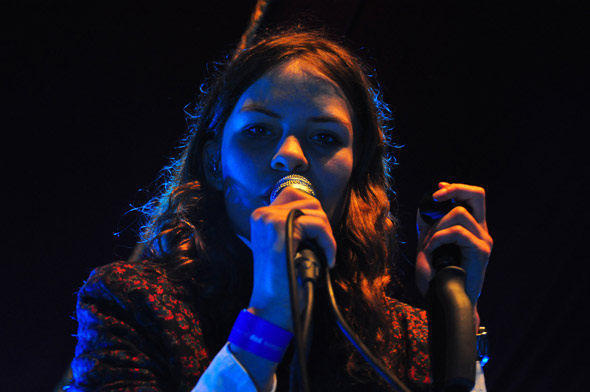 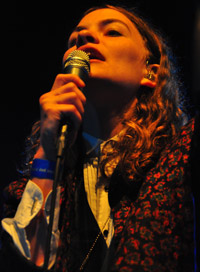 Following Stornoway’s surprise set was I Blame Coco, fronted by Coco Sumner, who one may also know as the daughter of Sting and actress/producer Trudie Styler.  At the tender age of 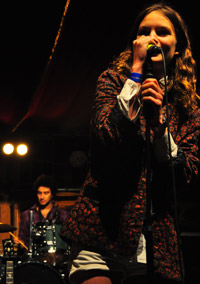 twenty, English descendant Coco is no Laura Marling (QRO live review), but in fact perhaps epitomizes the very polar opposite.  Aggressive and brash, I Blame Coco were a little more than intimidating, and once the novelty of the ‘show’ had worn off, one was left listening to weary, tarted-up indie-pop tunes – and who knows how she’ll ever pull off the six album record deal Sumner has scored with Island/Universal (Thanks to daddy dearest?…).  Although there is undoubtedly a commercial appeal present, and a clear pruned aesthetic, with tinges of electro and indeed all things pop in the literal sense, there is the very real possibility of success in the long run, but at Haldern, I Blame Coco is just one too many notches out of place. 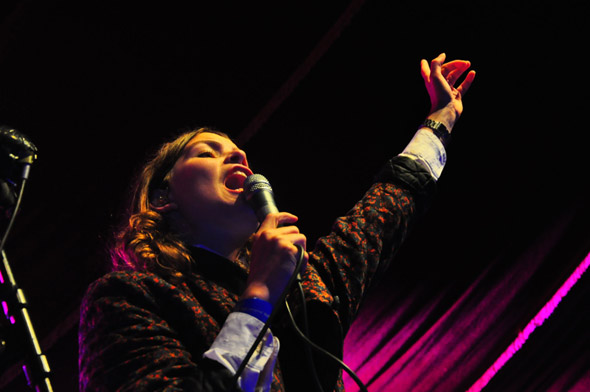 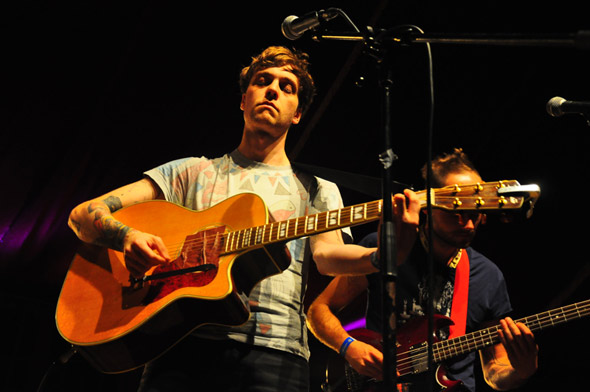 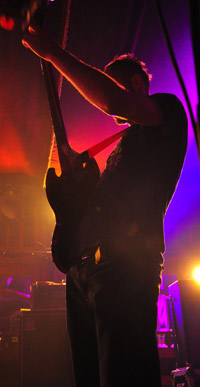 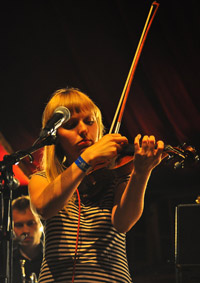 It would seem that Iceland’s Seabear would turn back on the bright lights and reestablish back probably what is more atypically the Haldern style, with majestic tunes.  Hailing from Reykjavík, Sindri Már Sigfússon primarily sings in English, and whilst Seabear as a project started out as Sigfússon, the addition of a keyboardist, violinist and a flurry of other instruments, alongside the usual suspects (most, if not all the band are multi-instrumentalists), seems to have proven a good choice, providing the crowd with triumphant songs easy on the ear.  With a great reception, the crowd swayed with uplifting tunes from their back catalogue.  Seabear may hail from Iceland, but hailing from Iceland doesn’t always mean that you’re either Björk or Sigur Rós (QRO live review).  Seabear have their own stunningly captivating sound, and certainly captured the hearts at Haldern. 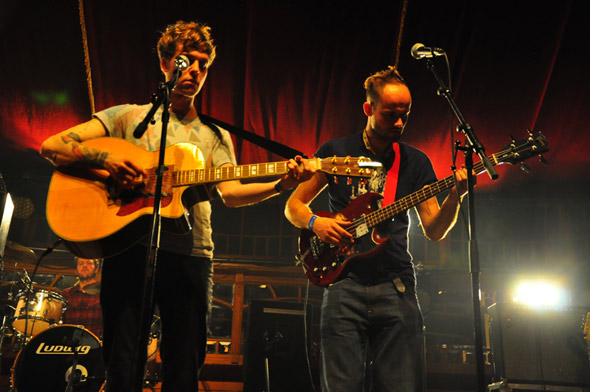 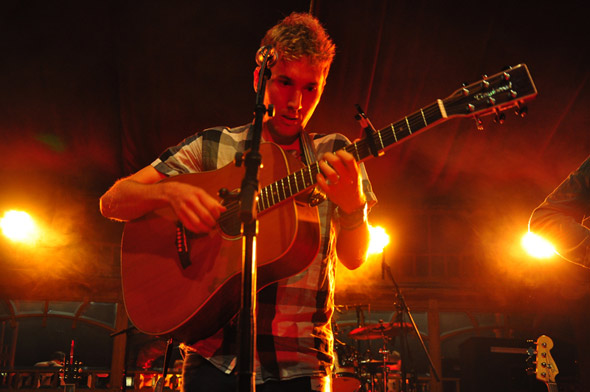 Click here for photos of Stornoway at 2010 Truck Festival in Steventon, U.K. in the QRO Concert Photo Gallery

Headlining the Speigeltent to close the night was, yet again, Stornoway, who entered this time to an emptying tent.  For those who stayed to watch the band, it was an enjoyable show – those who did stay showed great enthusiasm for this band hailing from Oxfordshire, England, who have made it to reasonable heights in the 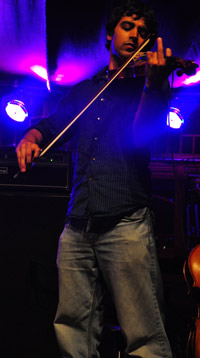 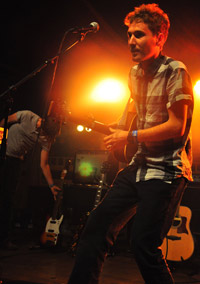 last year, after signing to label 4AD.  Stornoway, with their pop elements and wholesome lyrics (who don’t actually appear to be written by anyone over the age of twelve, sadly), seemed in their element as they sung away their hearts to an appreciate crowd.  The band present themselves with a very real sense of awkwardness and honesty which is endearing, both through their songs and in their presentation, but such is the awfulness of their lyrical capabilities that it’s almost unforgivable and impossible to surpass – “We are the battery human / But we were born to be free range”.  It’s a shame, but Stornoway still provided Haldern with a good jab at an attempt of really rather listenable pop with solid results. 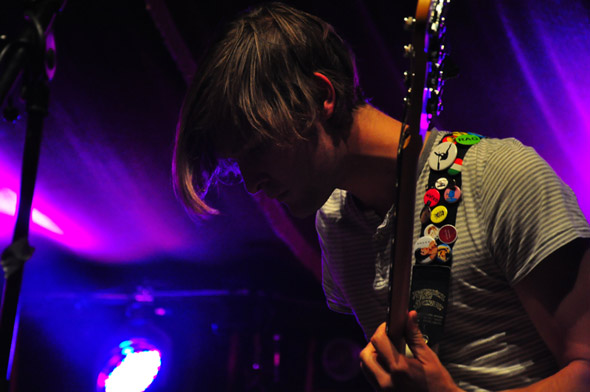 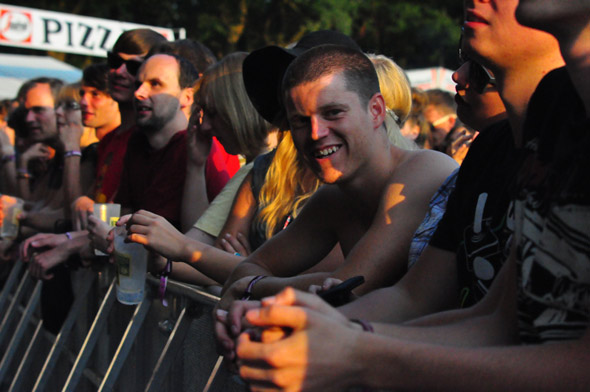