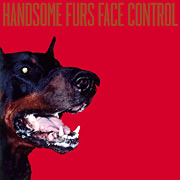 When Dan Boeckner originally set out from Wolf Parade on this side project with his wife, it wasn’t a question of if his vocals and guitar would be more isolated, it was a question of how much.  With his wife, Alexei Perry, providing the synth-based backing tracks on their debut, Plague Park, Boeckner’s howl and squelch were as naked and raw as ever – making for a pretty stark album.  This time around, the recipe is mostly the same, but there’s a little extra flavor in the dish.

Click here for photos of Handsome Furs at 2011 80/35 Festival in Des Moines, IA in the QRO Concert Photo Gallery

Click here for photos of Handsome Furs at Mercury Lounge in New York, NY on March 6th, 2009 in the QRO Concert Photo Gallery

Click here for photos of Handsome Furs at Terminal 5 in New York, NY on April 9th, 2008 in the QRO Concert Photo Gallery

On Face Control, the couple once again frames a dark, disenchanted picture, but with more vibrant brushstrokes.  Minimal electronic rhythms set the pace with a wry, Nintendo edge, while the distortion of Boeckner’s guitar and signature wail fill in the empty spaces.  The 8-bit bounce of opener "Legal Tender" gives way to Boeckner’s strains and relatively vivid, fuzzy effects. It’s the key to most of Face Control, with slight variations of intensity, but overall, each track blends together nicely.

There’s a staccato in Perry’s rhythms throughout Face Control that gives the album a sharp-edged, modernist feel.  What makes it all so special, though, is Boeckner’s passionate, throwback rock delivery, as they combine to create an album that’s cynically forward-thinking and wistfully reminiscent of rock’s better days.