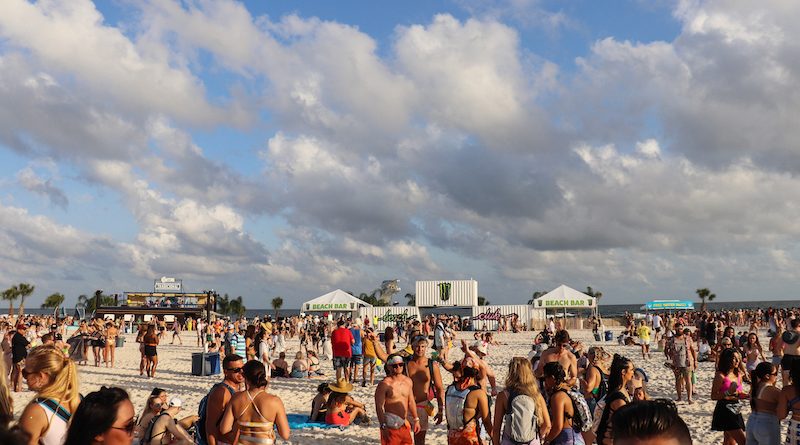 Hangout Music Festival took place on the sandy white beaches of Gulf Shores, AL on Friday to Sunday, May 20-22nd, 2022 for the first time in nearly three years. Although the weather tried to stop the festival a few times, and succeeded with a few delays, Hangout Fest pushed through and made for an amazing weekend in Gulf Shores. With arguably one of the best festival line-ups of 2022, containing headliners such as Post Malone, Tame Impala, Halsey, Fall Out Boy, and Maren Morris, there was no way the weekend could not be perfect.

Sunday started out with a longer weather delay than Friday’s, but the weather finally cleared up allowing festival gates to open for the day. First up was Sueco at the Surf Stage, whose energy was so amazing. He ran through the barricades separating the crowd numerous times and even hopped into the crowd during his last song and moshed with the crowd. Coming next at the Surf Stage was KennyHoopla, who also had his own amazing energy and performed hits such as “Smoke Break”, “Hollywood Sucks” and “Estella”. Then at Surf was Sublime With Rome, who even had a dog roaming around with them side stage! The crowd was so stoked to see them perform, and they definitely delivered to the crowd’s expectations.

Over at the Malibu Beach House tent was GG Magree’s DJ set, which had fans enjoyed so much that they had the metal barricade coming up and down off of the sand. Up next over the Boom Stage was FLETCHER, whose on-stage energy is always amazing. She entered with smash hit “Girls Girls Girls” before going into other hits “Forever” and “Cherry”. As she ended her set with “Bitter”, she even ran down the barricade, singing with fans and touching their hands.

Back at the Surf Stage was the lovely and amazing Phoebe Bridgers, who never ceases to amaze. Watching Phoebe Bridgers perform on the beach as the sun is starting to set is something that everyone needs to experience at least once in their life. Definitely a magical experience. She performed hits such as “Kyoto”, “ICU”, and finished out her set with “I Know The End”, as the crowd screamed at the top of their lungs with her.

Out at the main Hangout Stage Jack Harlow performed, just a mere two weeks after the release of his recent album, Come Home The Kids Miss You. He entered the stage blazing with his hit “Nail Tech”, just before going into new releases “Young Harleezy” and “I’d Do Anything To Make You Smile”. Although the album had only been out for about two weeks, most of the crowd already knew the words to his new songs! Most of the fans in the first few rows of the crowd had been waiting there all day just to see Harlow. Many fans held up signs/messages for Harlow on their phones during the set which made it up onto the big screen, causing the rest of the crowd to laugh. It was already sprinkling at the beginning of his set, but about halfway through that turned into a steady rain, which ultimately turned into a complete downpour, causing Harlow to have to cut his set short, against his own judgement. As he was running around the stage with a towel over his head, he stated, “They’re going to kick me off the stage real soon, so let’s go ahead and get to the hits.” He then went into smash hits “Industry Baby” and “What’s Poppin”, which the crowd went crazy for, rain or not.

Hangout ’22 ended at the main stage with Tame Impala, who did not disappoint at all. Although it was still pouring during their set and everyone was expecting the festival to be evacuated, it did not and Tame Impala put on a killer, magical performance in the rain. Their production and light show is truly unparalleled. They had many lasers going through the crowd during their set, which the rain made look even cooler. The rain did not deter fans from staying through Tame Impala’s set, majority of people stayed and danced in the rain to songs such as “Borderline”, “Let It Happen”, and “New Person, Same Old Mistakes”.