<img src="http://www.qromag.com/wp-content/uploads/2009/02/harlemshakesfeb14sm.jpg" alt=" " />Valentine's Day brought Brooklyn what they love - the frothy return of their own Harlem Shakes. ...

Way back in the early months of 2007, Brooklyn’s Harlem Shakes burst onto the scene with Burning Birthdays EP (QRO review), five songs of catchy indie-dance with an undercurrent of something sadder that justified the five young men naming themselves after a dance move not even from their own borough.  The band proceeded to shake it up all year, including tours with Tapes n’ Tapes (QRO album review) and Deerhoof (QRO photos from tour with Harlem Shakes), and ended the year by rocking Bowery Ballroom (QRO venue review) with friends White Rabbits (QRO photos from that show) and The Subjects (QRO photos from that show).

And then… the Big Apple waited.  And waited.  The recording process for their full-length debut, Technicolor Health, was delayed with label searches, illness of drummer Brent Katz (not the first time it’s struck the band – bassist Jose Soegaard (QRO interview) had his appendix removed in Ohio while on the road with Tapes ‘n Tapes), and more.  They did manage some touring, with acts like Ra Ra Riot (QRO spotlight on) and Tokyo Police Club (QRO spotlight on), but never hit up New York.  Other than guitarist Todd Goldstein’s solo side-project, Arms (QRO album review), Harlem and the rest of the city that never sleeps were sorely lacking in Shakes – until Saturday, February 14th at Brooklyn’s Southpaw.

Officially part of Brooklyn Academy of Music’s ‘Sounds Like Brooklyn’ series of concerts across the borough that weekend (including free shows at the BAMCafé – QRO venue review), this was really a ‘coming home’ party for the Shakes, celebrating the fact that they finally finished Technicolor Health (to be released on March 24th).  New numbers naturally dominated the set, starting with the catchy, but also growing “TFO”, and the record’s indie-dance-anthem opener, “Nothing But Change Part II”.  The band didn’t waste all that time away, as Technicolor pieces show real growth from Birthdays, their upbeat catch even more layered with experience and sound.  That was only more so the case with “Strictly Game”, as its choral, even indie-country elements made a great mix of sad song and dance-pop.

The Shakes didn’t forget about Birthdays, however, and the crowd went in uproars with the first notes to EP opener “Carpetbaggers”, the catchy indie-boogie that made you fall in love with the Shakes in the first place.  But after that, the band brought back Technicolor with two of its most original pieces, “Unhurried Hearts (Passaic Pastoral)” and “Winter Water”.  “Hearts” had almost African-like backbeats (sort of akin to what indie-prep hits Vampire Weekend should sound like, when they are constantly and inexplicably compared to Paul Simon’s seminal Graceland) and fitting natural tones, but “Winter Water” did lack some oomph in its grandiosity (the crowd did help out with their own clap-a-long).

And from there, the Shakes hit up some of their best tracks from either record, starting with Technicolor’s “Sunlight”.  Pressing and slightly indietronic, it let keyboardist Kendrick Strauch (QRO interview) shine, and then the whole band.  “Radio Orlando” was bigger and higher, with neat garage guitars from Goldstein (QRO photos solo as Arms), and really summed up the new sound on Technicolor.  Yet the Shakes did end with two barn Burnings, the driving EP finisher “Old Flames” leaving you wanting more, and returned from their encore break with their indie-dance anthem for action, which they said they hadn’t practiced in a year, “Sickos” (is there a better line out there than singer Lexy Benaim’s “If there’s a bomb in your hand / just throw it”?…).

As befitting their return home after so long, the crowd was thick with long-time Shakes fans & friends.  The whole event started rather late, at 10:00 PM (Southpaw had had an early show with local singer/songwriter Jennifer O’Connor – QRO album review), and there were two opening pseudo-solo bands, Phil & The Osophers (QRO interview) and Shilpa Ray (formerly of Beat the Devil – QRO live review) & Her Happy Hookers.  But the high interest in the show led Southpaw (QRO venue review) to announce that tickets were only going to be sold at the door, and that one should arrive before 10:00 PM to assure entry.  Thus, most of the crowd was there for the entire event (and 10:00 PM is usually when a headliner goes on, anyway).  That did help Phil & The Osophers (QRO photos) get extra ears, but people were already impatient for their Shakes (and tired – and drunk…) by the time Shilpa Ray & Her Happy Hookers (QRO photos) were on.

It’s been way too long since the Harlem Shakes played New York, and they’re headed off again soon for another tour with Tokyo Police Club, and one with the inferior Bell X1 (QRO album review) – but at least both tours will be hitting home this time.  More importantly, Technicolor Health is out next month (the band might have wetted appetites even more if they’d included the new record’s titular final track, an electronica upbeat anthem coda).  2008 might have been ‘The Year the Shakes Went Missing’, but 2009 looks to be ‘The Year the Shakes Returned in Full-Color Health’. 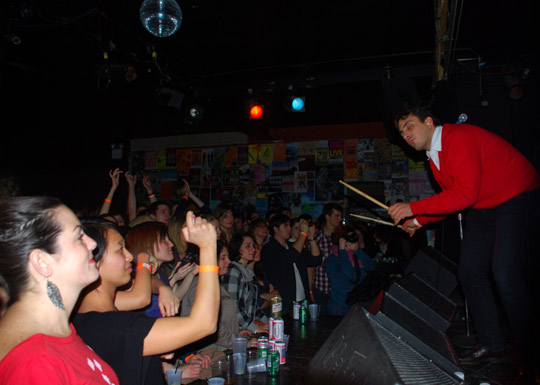