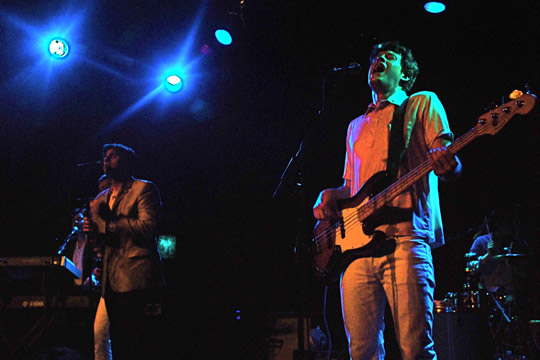 Click here for QRO's review of Harlem Shakes at Southpaw in Brooklyn, NY on February 14th, 2009

Click here for photos of Harlem Shakes at Bowery Ballroom in New York, NY on December 13th, 2007 in the QRO Concert Photo Gallery

Two years ago, many (including QRO) predicted big things for Brooklyn’s Harlem Shakes (note: they’ve officially passed the stage in their career where you can reference that they’re not actually from Harlem…), off of the Burning Birthdays EP (QRO review) and a great live show (Burning Birthdays EP release party).  But then, after closing out 2007 in style (QRO photos) at Bowery Ballroom (QRO venue review) with friends White Rabbits (QRO photos) and The Subjects (QRO photos), the band seemingly disappeared, with few shows in 2008 – and none in their hometown.  Thankfully, 2009 saw their long-delayed, much-anticipated full-length debut, Technicolor Health (QRO review) finally come out in the last week of March, preceded by a return to Brooklyn on Valentine’s Day (QRO review), tours with Canada’s Tokyo Police Club (QRO spotlight on) & Ireland’s Bell X1 (), and the band’s first-ever trip to Austin’s indie-music industry fest, South-by-Southwest (QRO festival recap).  And it was all capped by a headlining, Technicolor Health release party at their home borough’s Music Hall in Williamsburg (QRO venue review) on Thursday, March 26th, two days after the album release.  Could the Harlem Shakes flip the page on the lost year of 2008, and make 2009 the year everyone (including QRO) said they were going to have?

In the last five weeks, they’ve already managed to make this their year.

The Music Hall show was a special one not just because the band was celebrating the release of Technicolor Health and returning home to Brooklyn after tours & SXSW (where they played something like eight shows in half as many days – QRO SXSW 2009 Day One recap, Day Two recap, Day Four recap), but because they had a full compliment of extra musicians, including horns and female vocals, allowing them to play songs from Health that the Shakes had never played live before, “Niagara Falls” and “Natural Man”.  With three horn players (including semi-regular, at least in these past five weeks, saxophonist David Kant), guest vocals from Julia Tepper of Frances (QRO photos), and even the occasional jump-in by Daoud Tyler-Ameen (of opener Air Waves) on percussion (like on at least one show at SXSW – QRO photos) & Brian Betancourt (of Frances & Hospitality – QRO photos) on guitar – mid-song – the Harlem Shakes filled the stage like they filled Music Hall, impressively selling out the place in their biggest-ever headlining show. 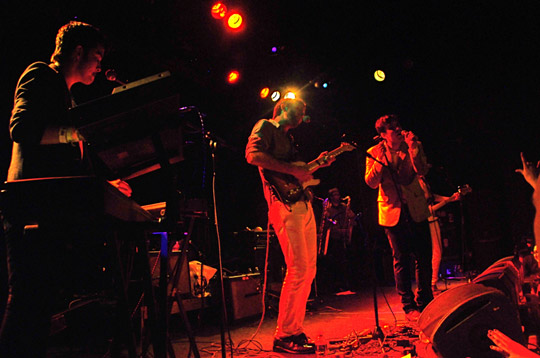 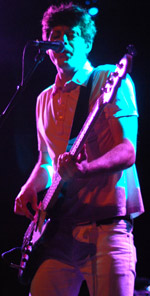 However, “Niagara” & “Natural” might have actually been the (relative) weak points of the show: while Health displays the band’s impressive growth from indie-dance in all directions, the band still relies on its excitable energy live, energy that was fueling the relatively young crowd (especially for a school night – well, it is spring break…), but died down a bit during those swaying, more orchestrated debuting songs.  It was great that the band finally got to give those two numbers their live debuts, getting to not just play with a fuller band, but also a fuller set list, after abbreviated SXSW & opening shows, but there’s a reason the live show is dominated by the catchy songs that’ll leave you boppin’. 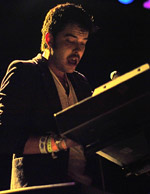 And that was certainly the case with the rest of the set, naturally primarily Health (they played every single song from the record), but also including Birthdays (only left out “Red Right Hands” & “Felt Wings” from the EP, neither its strongest ones).  “TFO” opened on a relatively grand note, a little ill fitting for the show that was to come, but perhaps the best place on the set list for it.  It was the semi-rhyming indie-dance-plus “Nothing But Change” & 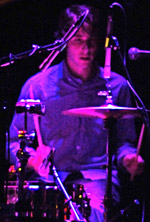 “Strictly Game” (or “Nothing But Game”…) that really lit off the night like they light off Technicolor at its start.  The Shakes slowed things down a bit, but at the right point, with the almost choral “Unhurried Hearts (Passaic Pastoral)”, then turned the heat back up with “an old jam” (i.e., from Birthdays), “Sickos”.  It was a bit of a mistake, going “Sickos”, “Niagara Falls”, “Carpetbaggers” (another classic from Birthdays – “It sounds like it should be on an [actual] record”, one fan said), and “Natural Man” on the set list, as the old great/live debut/old great/live debut alternation not only took away from the energy that they generated by their older songs, but also kind of made the band’s growth from then seem almost like a bad path. 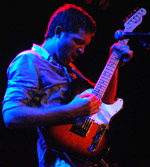 But the Shakes ended on just the right notes, with the pressing and growing “Sunlight”, the epic “Radio Orlando” showcasing Health’s growth the best, and going into the encore break with 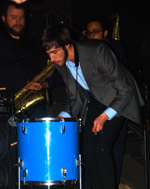 Birthdays’s “Old Flames”, an old song that’s really improved over time to now be maybe the best from that EP, live (it was the only Birthdays song they did at SXSW).  The band returned for a well-deserved encore with the swaying & grand “Winter Water” – like “TFO”, starting off might be the only place on the set list for it – and closing out the night “for real, this time” with “Technicolor Health” like on the album (“Our record coincidentally has the same name…”), giving the show a fitting send-off, adding some of their indie-dance energy to the anthemistic coda. 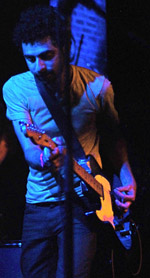 Having seen the Shakes many, many times in the past month-plus, it’s great to see everyone still in fine form.  Guitarist Todd Goldstein (also of solo-side-project Arms – QRO album review) and bassist Jose Soegaard (QRO interview) are still 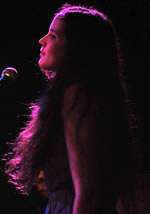 manic live, Soegaard jumping and dancing (and sweating), Goldstein with funny, but precise moves.  Meanwhile, singer Lexy Benaim is much more coming into his own – in between those two ax-men, Benaim could sometimes not stand out, even seem a little reticent, but he’s happier and more confident now (thanking that “Williamsburg people are nice!”).  And drummer Brent Katz and keyboardist Kendrick Strauch (QRO interview) are still the unsung heroes of the band, providing the beat and harmony, respectively, that everything comes from.

Before one old number, Benaim said that they’d first ever played that song at Acme Underground, saying how great it was to now be playing it in the much bigger & nicer Music Hall – and then dedicated the song to “whoever knows what the hell Acme Underground is called now…” [note: it’s now called ‘Aces of Clubs’].  Just as how Technicolor Health not only lived up to the promise of Burning Birthdays but also grew beyond it, Harlem Shakes in 2009 are living up to the promise of 2007.  Or as they all sing on the chorus to “Strictly Game”, “This will be a better year”… 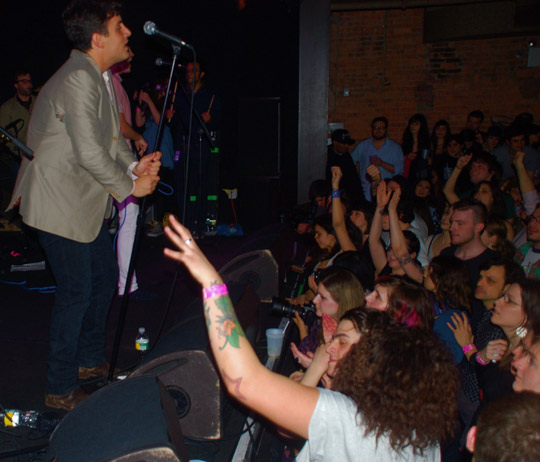