<img src="http://www.qromag.com/wp-content/uploads/2009/03/harlemshakestechnicolor.jpg" alt=" " />Harlem Shakes are worth the wait as the grow and grow in their highly-anticipated <i>Technicolor Health</i>. ... 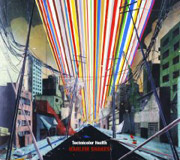 When the five-young-man indie-dance act Harlem Shakes broke outta Brooklyn at the start of 2007 with Burning Birthdays (QRO review), many (including QRO) predicted big things for the band (though we said so before it was cool…).  Yet their follow-up debut LP, Technicolor Health, took two years to come out, and the group also took a lot of time off from touring, not playing New York City for fourteen months (QRO photos from last NYC show, December ’07 – QRO live review of return, February ’09).  So is Technicolor Health worth the wait?  Yes, yes it is, as the band keeps the great essence that made you love them in the first place, while showing serious growth in all directions.

Click here for photos of Harlem Shakes at Bowery Ballroom in New York, NY on December 13th, 2007 in the QRO Concert Photo Gallery

Calling Harlem Shakes ‘indie-dance’ was something of a misnomer two years ago, born from the band naming themselves after a dance move years before that (it’s not like they’re from Harlem, either…), and that’s even more the case with Technicolor Health, as the band builds upon their high tempo spirit with skill and choices that are interesting, but also compelling.  There’s an up-charged energy to Health, but instead of going grand, ‘save the world’ (like tourmates Ra Ra Riot – QRO spotlight on) or speedy alt-punk (like also-tourmates Tokyo Police Club – QRO spotlight on), the Shakes retain their dancing shoes while mixing in choral and even African rhythms (kind of like what people mean when they misapply the comparison to Paul Simon’s seminal Graceland to the over-rated – but also Shakes tourmates… – Vampire Weekend).  Technicolor takes the dance party – and all the dancers – outdoors, without losing a step.

The great outdoors is certainly a theme that runs through Technicolor Health, especially in its middle.  The pressing, slightly indietronic “Sunlight” brings the band’s beat into a bigger shine, while the following “Unhurried Hearts (Passaic Pastoral)” is some sort of epic riverside anthem, like a call to the beauty of the Hudson’s Garden State tributary.  And if the subsequent “Winter Water” and “Natural Man” are a little too grand and lack some oomph (would have been better to separate the two on the track list), they do show what the band can do, especially in the synths from Kendrick Strauss (QRO interview) on “Natural”.

All five of the Shakes stand out at various times on Health, whether Strauss’ keys on “Natural” or on the record’s upbeat electronica anthem title track coda, the infectious beats out of drummer Brent Katz & bassist Jose Soegaard (QRO interview) – though perhaps one shouldn’t use the word ‘infectious’ with regards to those two, both of whom have suffered serious illness during the making of Health, behind part of its delay – on opener “Nothing But Change Part II”, singer Lexy Benaim’s right level of unique vocals on the indie-country-sad-meets-indie-dance-pop “Strictly Game”, or guitarist Todd Goldstein’s (of solo-side-project Arms – QRO album review) ability to traffic in everything from the catchy to the expansive on the brightening “TFO”.

The Shakes can play it sad on the LP, such as with the swaying “Niagara Falls”, but the record is one that drives the listener onward and upward.  The best example of that – and of the Shakes serious growth – comes in the penultimate “Radio Orlando”, which sees the band go bigger and higher, yet also introduce some great garage guitars and group chorus.  After the long dark of the production process, Harlem Shakes have come out of it in full Health and Color, with a record that fulfills and even exceeds the wait & expectations.

Ace Enders & A Million Different People : When I Hit the Ground