<img src="http://www.qromag.com/wp-content/uploads/2009/06/haydentheplacewherewelived.jpg" alt=" " />The ever elusive Hayden puts himself a bit more out there on <em>The Place Where We Lived</em>. ... 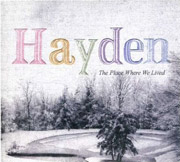 Canada’s Paul Hayden Dresser (QRO interview) has always been something of a reclusive figure, disappearing for years at a time, and doing almost all of his work himself, to the point of releasing his records on his own imprint, Hardwood.  But after 2008’s In Field & Town (QRO review), Hayden seems to have warmed up a bit, waiting only a year to put out the new The Place Where We Lived, even enlisting someone else, renowned north-of-the-border songwriter/producer Howie Beck, to produce it, not to mention bringing his touring band, Cuff the Duke, into the studio as well.  The alt-country/folk strains are still very much there, but Hayden just seems more comfortable.

Nowhere does that come out more than with the record’s titular opener.  The warm alt-country wist of “The Place Where We Lived” is not over-maudlin or over-heartache, but with just the right levels.  The following “Message From London” and “Disappear” are maybe a bit too similar, but the warmth also comes out on happier tracks like the upswinging “Let’s Break Up” and more of a rocker “Dilapidated Heart”.  Hayden is still a bit of a mumbler in his lyrics, but it just feels more endearing than on In Field.

Another shift from that record was Hayden going away from the keys and more towards the guitar.  This move would seemingly be a bad one, since the keys were the strongest point of In Field, but the guitars and just overall instrumentation have picked up the slack, like on the sliding guitar-twang “Never Lonely”.  There are still a few stripped, sad pieces, and one instrumental in “The Valley”, but poignant coda “Let It Last” that ends The Place is more accepting than Hayden has ever been.

Considering how much of his emotions Paul Hayden Dresser puts into his music, it’s kind of surprising that he’s so reclusive otherwise.  But with The Place Where We Lived, Hayden comes a bit out of his shell.

MP3 Stream: "The Place Where We Lived"