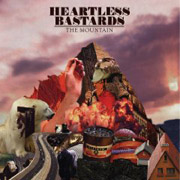 While Erika Wennerstrom hails originally from Dayton, Ohio, she moved to Austin in ‘07, and her sound has gotten more southern & country.  On her third release fronting Heartless Bastards (once again changing her backing line – though bassist Jesse Ebaugh played on her initial demo), Wennerstrom has shifted a bit from the garage-rock of 2006’s All the Time to more of an alt-country sound, yet still with a ton of grit.  And the balance of the two works well on her latest, The Mountain.

That twang comes out right from the get-go with The Mountain’s starting, title track, but one can also hear a touch of grind lain beneath.  Those twin poles dance and duel throughout the record, which is at its finest when the two are equal, as they can complement each other.  Such is the case with the pounding rock-thump of “Early In the Morning” and the epic and memorable “Witchy Poo” (the penultimate piece also breaks the ‘second-to-last-track curse’ – i.e., that bands put their worst track second-to-last on an album).  But Wennerstrom also doesn’t have to play it big & bold.  The sad, slow strum of “Hold Your Head High” is world-weary, but not broken, while finisher “Sway” goes more world-wise in its alt-country, for a solid, laid-back finish.

When Wennerstrom relies too much on one avenue or the other, The Mountain does slip a bit.  “Out At Sea” is a return to her garage-rock roots, while the country/rock procession of the following “Nothing Seems the Same” goes on a bit too long.  And though the sad, stripped “So Quiet” brings a nice new, lo-fi, old-timey feel to the record, putting the similar-sounding “Had To Go” right afterwards on the track list wasn’t the best arrangement.

Fellow Ohioans The Black Keys (QRO album review) discovered Erika Wennerstrom, she even signed to their label, and Heartless Bastards have that same blues grit.  But on The Mountain, an alt-country twang is added to give an even better effect.