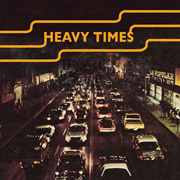 Twelve songs in twenty-two minutes?  That’s a motherfucking punk album, guy.  No fooling around.  If you’ve waded through the hip-deep excess of modern alternative balladry, the symphonic gluttony, the lugubrious wastelands of 64-tracked ProTool purgatory, all these past years, suffering the Radioheads (QRO album review), the MGMT (QRO live review) 2.0’s, the soggy chill waves dashing chill ships upon then chill rocks of a chill shore, then you’ve probably forgotten what the art of the ‘short & sweet’ sounds like.  No – we’re not talking the gumball pop confections of WAVVES (QRO album review) & Best Coast (QRO live review), trimmed to fit within the time limits of your typical Target ad spot – we’re talking about music that was made to strike hard, fast, and infectious.  We’re talking Minutemen.  We’re talking Ramones.  We’re talking Heavy Times, a Chicago-based, Midwest-tested, mother-approved punk rock band that knocks it out of the park with their latest LP Jacker.

Hard to anticipate this album emerging out of the quasi-twee garage 7" Heavy Times released on HoZac.  The A-side "No Plans" is nearly a Beatles-esque sing-a-long.  No points off for vibing on one of the greatest acts of all time, but the average listener would have pegged the band for a different, more saccharine trajectory.  The B-side "Ice Age" ramps it up a bit by a few degrees.  There’s a little more growl to the groove, pop with all the fun and none of the consumer culture, the expressway to yr pavlonian mind, condescending repetition of contemporary pop refrains that ring truer as market-tested mottoes rather than subcultural call to arms.  Closer to the mark was Heavy Times’ Dead: ten tracks of stoner punk fun with track titles like "Math Witch" and "Drug Lake".  Available on Rotten Tooth Records, it is definitely a worthy prelude to Jacker.

Worthy prelude aside, Heavy Times has raised the bar with Jacker.  The compositions are tighter, exhibiting ruthless pop efficiency while still flaunting the swaggering excess of punk ‘fuck it, just play’-ness.  The squeals, the pounding percussion, the buzzing guitar lines, the gravelly textures, the guy-next-door vocals polished to a Casablancian glimmer: produced and recorded to bring out the biting hooks while preserving the rough edges.  Thematically, Heavy Times gives us a more mature rendition of a much starker, urban dystopia.  "Future City", "Suicide Rider", "Erase the Sun", "Skull Hair", "Memory Dump", "Electronic Cigarette" – Jacker gives us a quick & dirty sketch of a world we’re barely holding onto by the seat of our pants, a neon-cyber mess of disappointment and violence, highlighted by a single redeeming feature: the naked, unadorned, sheer sense of excitement that the entire mutilated polyglot world fills us with, an enthusiasm that floods our eyes, ears, throats, and veins, and percolates in fantastic feedback loops of entropic futuristic ecstasy.  Although you may not always be able to understand what Heavy Times is squawking about (lead off tune "Motionless Drift" sounds more like "Moisture Strips"), you will be left with the vague, powerful (all the more powerful for being vague!), exhilarating sense of standing on the precipice of a vast abyss, witnessing the rise of something enormous and unspeakable – the Mayan End of Times?  No more symphonies: eschatological forebodings demand simplicity.  Make Heavy Times your soundtrack for the apocalypse.