The Hella Mega Tour came to Atlanta with Green Day, Fall Out Boy, and Weezer.... 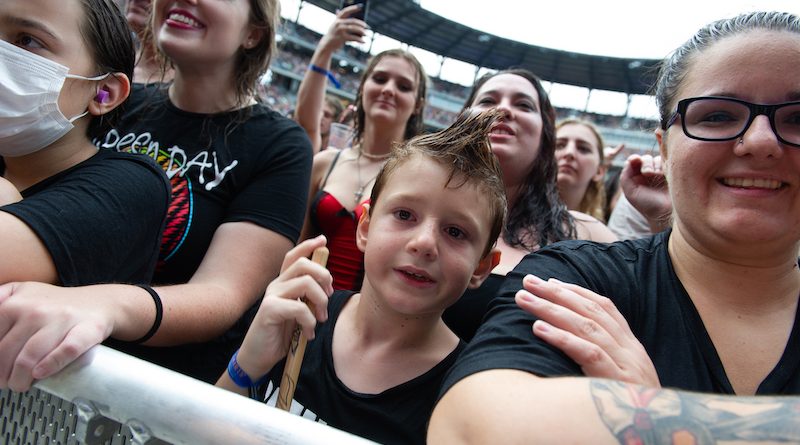 Most of us have probably felt a bit like hermits over the past 18 months in lockdown. We may have wondered if we would ever come together again and listen to live music with 42,000 of our closest friends. We got our answer in a big way on Thursday, July 27th at Truist Park in Atlanta at the long-awaited ‘Hella Mega’ tour, featuring Green Day, Fall Out Boy and Weezer. Only time (and an unpredictable pandemic) will tell if the respite is a temporary one, but as the crowd filled the stadium, the anticipation and pent up energy was palpable.

The rain that had descended on the park, and continued throughout the warm-up act, magically cleared just as Weezer took the stage to the cheers of the relieved and jubilant fans. Frontman Rivers Cuomo seemed as excited as the crowd was as he broke into “Hero” (QRO review), sporting a serious mullet, horned-rimmed glasses and a respectable start on a “pornstache”.

The entire band was in great form, and still masters of their brand of stripped-down, “smartass” rock and roll. If you look beyond the nerdy/cool vibe, Weezer is, in many ways an old-fashion guitar-heavy band. Cuomo, guitarist Brian Bell (channeling an ‘80s Cheap Trick Robin Zander in a suit and skinny tie), and Scott Shriner on bass (sporting orange sunglasses to match the hue of his hair), all riffed together seamlessly, with Patrick Wilson banging out strong rhythms to anchor the sound.

Weezer mixed a couple of new songs (“The End of the Game” and “All My Favorite Songs” ) that weren’t at all out of place with favorites like “Hash Pipe”, “Beverly Hills”, “My Name is Jonas”, and “Say It Ain’t So”. The beachballs came out, buoyed by the audience, during “Island In the Sun”, and in one of the highlights of the evening, the band gave a completely unironic performance of Toto’s “Africa”. They closed it out with “Buddy Holly” and a confetti cannon. Weezer has always done a stellar job of channeling teen angst into humor – and on this night, you couldn’t miss the elation in Cuomo’s lilting tenor.

After Weezer exited the stage, the crowd was taken on a trip the Twilight Zone where a clip of Office Space’s Ron Livingston, in full Rod Serling mode, introduced Fall Out Boy to the excited fans. Lead vocalist and rhythm guitarist Patrick Stump, still in fine voice, belted out “The Phoenix”, while Pete Wentz, resplendent with a long fringe of bleached-blonde hair, worked the crowd like the frontman he actually is.

After the opener, the band graced the crowd with first-rate versions of their greatest hits, from “Sugar, We’re Going Down”, to “Uma Thurman”, “Dance, Dance” and “This Ain’t a Scene, It’s an Arms Race”, with great lead guitar from Joe Trohman, and driving drums from Andy Hurley, making it one of the strongest songs of the set. The band has a flair for the dramatic and a penchant for pyrotechnics – and not just from the stage, but also from Wentz’s specially outfitted bass guitar and Stump’s piano.

It was clear to all that the band was thrilled to be in front of a crowd once again, and in pretty great company, with Weezer and Green Day. Wentz discussed the influence that both bands had on FOB, and how meaningful it was to be performing with them. “Dream fucking big!” he said, in reference to the band’s excellent fortune. Patrick Stump was actually wearing a Green Day trucker cap to complete the picture of fan boy admiration. Of course, the band has its own impressive following, and Wentz did a fantastic job getting the crowd to engage, and enthusiastically sing along to every number. The set ended as strongly as it began, with “Centuries”, leaving the audience primed for the main event.

After a rather lengthy break between sets, the moment everyone waited for had finally arrived, and few bands know how to set up the audience for maximum effect as masterfully. Just as everyone’s anticipation had built to a crescendo, the unmistakable harmonies of Queen, singing “Bohemian Rhapsody” came through the sound system, wordlessly inviting the entire stadium to sing along. The soundtrack then transitioned to the Ramones’ “Blitzkrieg Pop”, while a shadowy figure took the stage. To everyone’s puzzlement and delight, someone in a rather shabby bunny costume, wearing a “Tres Cool” t-shirt bounded across the stage, dancing and hopping to the song as a bizarre homage to Green Day’s punk forefathers.

By the time Billy Joe Armstrong took the mic, in his trademark shock of black hair, and skinny tie, the crowd had been whipped up into what could be characterized as a frenzy, or at least as close to a frenzy as a Thursday night suburban Atlanta audience could muster. Armstrong began with the apropos “American Idiot” as he excitedly asked the crowd, “Are you fucking ready?!  Spoiler alert: They were definitely ready!

The band then (literally) brought out the fireworks as they served a ferocious rendition of “Holiday”, with familiar bass licks from the mischievous rascal, a now-blonde Mike Dirnt – and flawless drums from the ironically faux-hawked Tre Cool. This original line up still knows how to hold the audience in the palms of their hands, even after (gulp!) 35 years.

As a touching punctuation point, Armstrong invited a girl – much younger than the years the band has been together – to the stage. Her retro punk look with spiky hair and red plaid pants was a tribute to every punk kid who heard and understood Green Day in their youth. Every middle-aged fan wished they were her at that moment, as she crowd-surfed to the “Pollyanna” lyric, “It’s wonderful to be alive.”

There were so many similarly powerful moments in their 20+ song set, and they sounded as tight as if this was the end, not the start of the tour. For those who love to dance, there was “Welcome To Paradise”, and “Jesus of Suburbia”. For the rockers, there was “Brain Stew”, “My Name is Jimmy” and a fantastic cover of KISS’s “Rock and Roll All Nite”. In one of the most fun and gratifying moments, Armstrong recruited a guitarist from the audience. “You only have to know three chords,” he announced. Soon the audience was cheering for him to choose a shy, bespectacled kid named Clay, near the front of the stage. Armstrong invited him up, and he surprised everyone by shredding “Basket Case” with the band, finishing with guitar solo that would put many wanna-be rock stars to shame. The sheer joy in his performance, and in the people who watched him, could actually be characterized as inspiring. At the end of his remarkable performance, as 42,000 people yelled “Clay! Clay! Clay!” In unison, Billy Joe informed him that he would be leaving with the guitar he just played. The look on his face and the genuine adulation he experienced was what all of us needed right now.

It’s hard to overstate just how much command that Armstrong has over an audience. Gone is a measure of the post-punk rebellion and anger once displayed by an earlier Green Day – but it’s been replaced by a band that knows how to make people feel happy and thoroughly entertained. As the set wound down, and became more reflective with “Boulevard of Broken Dreams”, “Wake Me Up When September Ends” and the show closer “Good Riddance (Time of Your Life)”, Green Day had left nothing on the table, and as the thousands left the park, uncertain of when the next opportunity of this kind may come their way, they left with the knowledge that coming together and enjoying something as simple, yet profound as a rock concert, is something possible – even today.