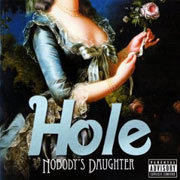 After a twelve-year sabbatical, Hole returns with Nobody’s Daughter.  The eleven-song collection produced by Michael Beinhorn (Soundgarden, Ozzy Osbourne, Red Hot Chili Peppers) resonates with a contrasting but cohesive range of musical influences.  Despite the heaviness inherent in Beinhorn’s previous associations and Hole’s distant past, most tracks evoke a singer/songwriter-based format.  Acoustic guitars provide a backbone to cuts even when the electric guitars predominate.  This technique, which The Rolling Stones mastered on epic albums like Sticky Fingers, enhances the homegrown, intimate vibe of the proceedings.  The album’s other predominate ingredient is, of course, Hole’s leader and sole original member, Courtney Love.  Though her voice has been ravaged and deepened with abuse and age, Love uses it to her advantage.

The album’s first single, "Skinny Little Bitch", is as taunting as its title.  The punk infused rocker feels like a lost Iggy Pop (QRO photos) b-side.  Raw and venomous, Love sadistically lambastes a suitor, "You stagger here on broken glass / So I could kick your scrawny ass / All the drugs and all the burns / What a nasty piece of work."  When, in the last 30 seconds of the track, the group picks up the pace, their lurch up to speed sounds like they’re the ones on drugs.  It’s a nasty piece of work, but it works.

One of the album’s best tracks, "Honey", is anchored by strummed acoustic guitars interspersed with electric guitar blasts and leads.  The melody is well crafted and Love’s vocals are particularly expressive.  There is no hint of warm tea and honey being ingested to restore her voice.  Instead, it sounds as if Love’s nightly ritual is to lay her larynx to rest on a bed of nails.

Simultaneously compelling and awkward, "Letter to God" feels like an open diary inadvertently left on the kitchen table.  An electric guitar plays a somber arpeggio as Love sings, "I never wanted to be the person you see / Can you tell me who I am / I always wanted to die / But you kept me here alive / Can you tell me who I am."  Once the group joins in, the electric guitar plays a line that reverberates like tear drops.  At one point Love’s vocals become overwrought, but by then the confessional and voyeuristic craving is satiated.  Linda Perry of Concrete Blonde produced and wrote the tune, but talk about comprehending your subject…

"Loser Dust" takes off straight out of the gate and is well sequenced after the melancholy "Letter to God".  This upbeat romp – the next addition to your workout playlist – is gloriously part Sex Pistols, part Screaming Trees circa Uncle Anesthesia.  Yet "Loser Dust" never feels derivative.  Instead it comes across as real, honest and rockin’.  Love co-wrote this with Billy Corgan of The Smashing Pumpkins, who perhaps masterminded the track’s ragged collapse into glorious feedback.

"How Dirty Girls Get Clean" begins with Love banging out chords on her acoustic and belting out vocals a-la To Bring You My Love-era P.J.  Harvey.  Then the group kicks in with a loose, Sonic Youth (QRO live review)-inspired stampede.  A frantic down-stroked electric guitar cuts across the groove.

The album closes with the evocative, all-acoustic "Never Go Hungry".  The only song on the album solely penned by Love (many tracks were co-written with new Hole guitarist Micko Larkin) is also the only song that could be a classic folk song.  Think Woody Guthrie or Bob Dylan gone grunge.  The sentiments provide a poignant bookend to the proceedings.  "It’s a long way back / From where I’ve fallen down / It’s a very hard fall / It’s a very cruel town / And I’m hungry for life a little less cruel / Some dignity, not too much sorrow / Just a little bit of hope / Hold out for tomorrow / Oh I don’t care what it takes my friend / I will never go hungry, go hungry again."  Amen.