<img src="http://www.qromag.com/wp-content/uploads/2010/06/holyfuckmay29.jpg" alt=" " />On a wave of critical acclaim since breaking into music scene some years ago, Holy Fuck came to Boston's Middle East to show New... 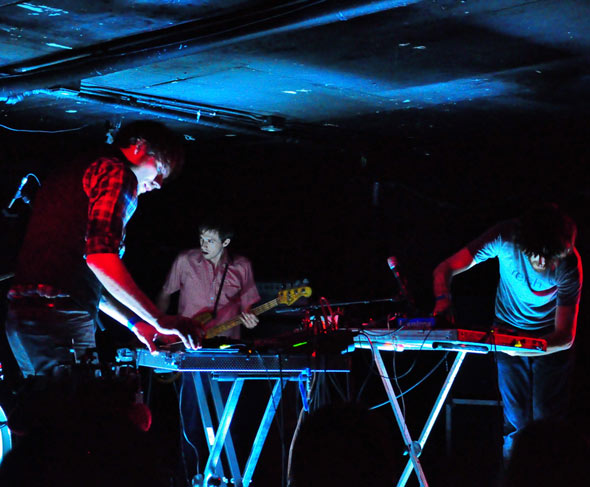 Click here for photos of Holy Fuck at 2010 Primavera Club Festival in Barcelona, Spain in the QRO Concert Photo Gallery

Click here for photos of Holy Fuck at 2010 Siren Music Festival on Coney Island in Brooklyn, NY in the QRO Concert Photo Gallery

Click here for photos of Holy Fuck at SXSW 2010 in Austin, TX in the QRO Concert Photo Gallery

On an overwhelming wave of critical acclaim since breaking into music scene some years ago, Holy Fuck came to Boston’s Middle East to show New England what it’s all about.  The Toronto-based quartet have come to the forefront of their hard to classify genre – loosely as ‘classified experimental’ – but in fact including core elements of a ‘typical rock band’ – bass and drums, whilst incorporating a massive set of synths and other toys – most namely their use of a 35mm film synchronizer.

Holy Fuck were well received with the venue packing out this small, dark venue-but with uplit stages, raised platforms with a complete set of lights installed underneath, creating a show of its own, much to the crowds delight, who edged on a full blown dance party.

Holy Fuck are notable in their genre for not using traditional mixing techniques in their shows and music.  Rather than using looping and so forth, each beat is hand selected to form a pumping wave of music.  With a range of tracks from the slower, atmospheric, the big beats and bass heavy dance tracks were well received. 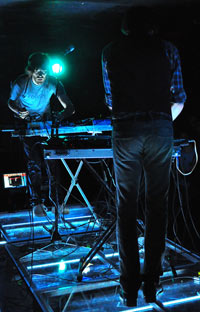 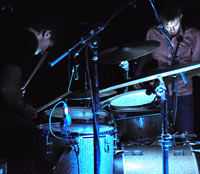 Such is the acclaim Holy Fuck have received that they have been picked up by major artists such as Radiohead (QRO album review), who they have also mixed for, as well as working with the same producers as breakout bands like Broken Social Scene (QRO spotlight on).  Its clear to see why – the band have a fine selection of varied material which all have a core visceral element.

Holy Fuck continue their tour of the states & the word is rapidly spreading about the critical acclaim of this band.  With many die-hard fans that cite Holy Fuck in their core musical taste, there’s no going back, as the popularity of this Canadian collective spreads like wildfire. 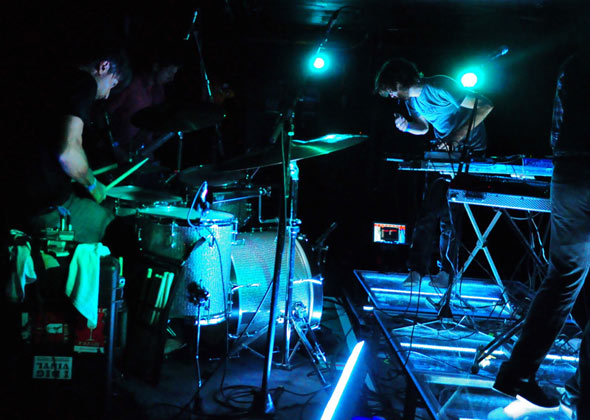