The Honda Civic Tour closed out at Central Park SummerStage with Portugal. The Man, Grouplove, and Typhoon.... 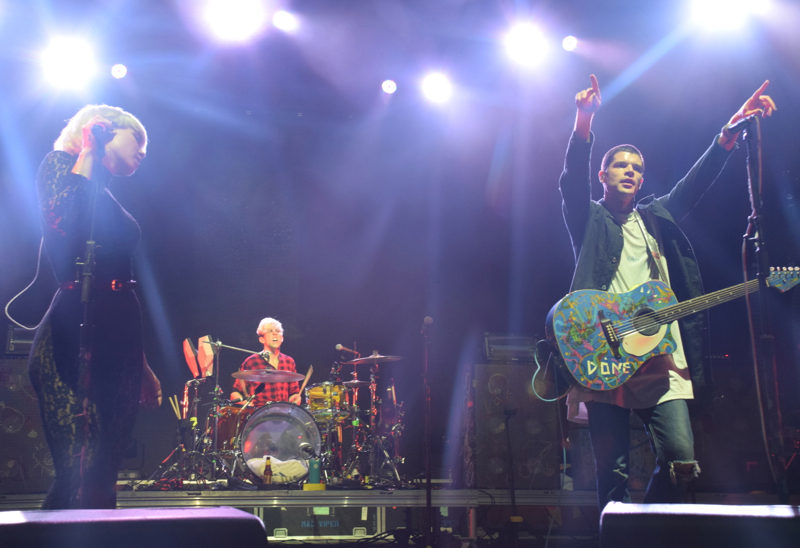 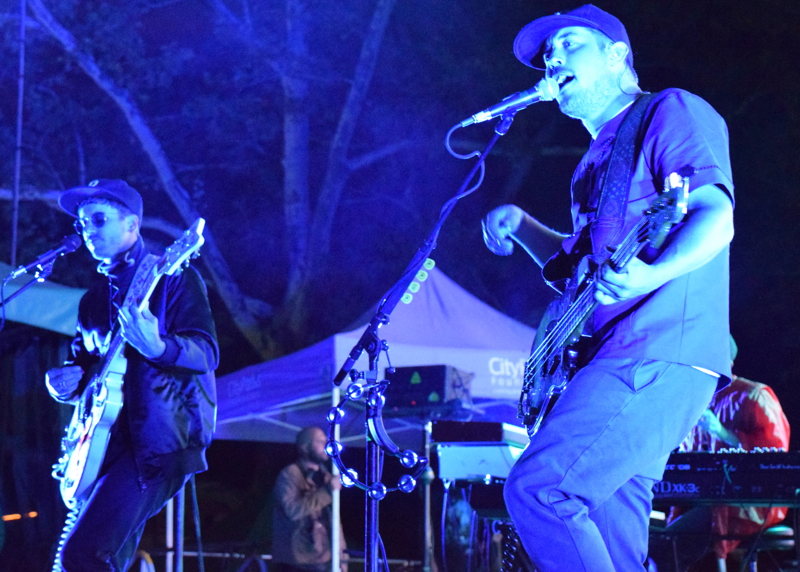 A long time ago, when musicians put out actual records that actual people actually bought, corporate sponsorship was considered anathema across much of the music industry. That wasn’t keeping the spirit of what the hippie forefathers refused to go to war for, and seemed to debase music in general. Plus the product placement was quite ham-fisted – think of, “I’d Like To Buy the World a Coke”.

But this is the twenty-first century, when people aren’t buying music or only downloading/streaming it (thanks, Apple), and corporate titans are lauded as often as they are derided (think Apple’s Steve Jobs). What’s more, Madison Avenue has come a long way since Mad Men, with viral videos & viral marketing campaigns, micro-targeting, and whole sorts of other memetic research that you can’t even dream of. People don’t even deride major music labels any more. So it’s the right time for the Honda Civic Tour, which closed out it’s 2014 run at New York’s Central Park SummerStage on Tuesday, September 16th with Atlantic Records co-headliners Portugal. The Man and Grouplove. 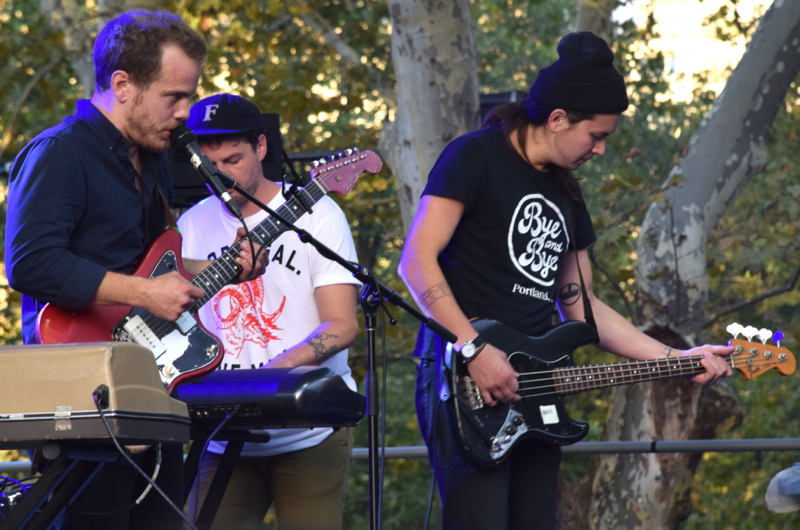 Like most outdoor shows, the night was an early start/early end, with opener Typhoon playing while it was still light out. The many-membered alt-folk collective had a big sound for the big space (QRO venue review), which was still filling up. SummerStage also had its usual food stalls, Asia Dog, Lonestar Empire, and Pizza Motto, which a lot of people visited after Typhoon (judging between the three, Pizza Motto was the best value for your money). 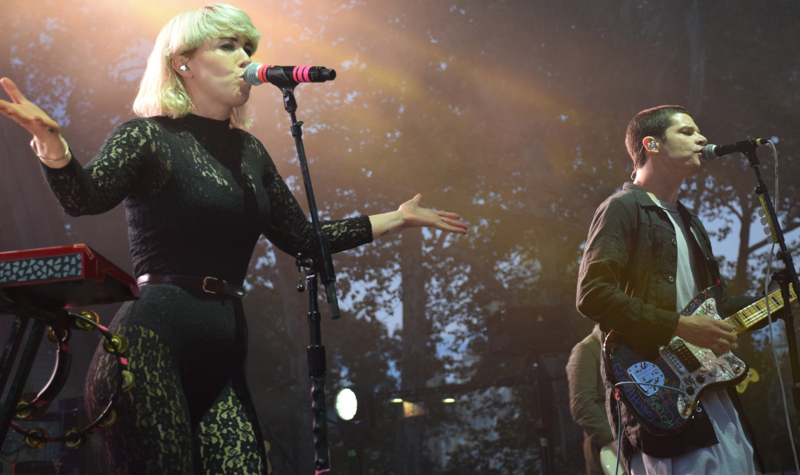 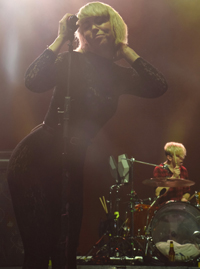 While the Honda Civic Tour was billed with Grouplove on top (that’s what the photo pass stickers had), they actually didn’t headline this final night, leading to a set a bit shorter than at ‘regular’ Grouplove shows (such as back in March in New York – QRO live review). They still started with what has been their usual opener ever since the release of sophomore full-length Spreading Rumors (QRO review), “I’m With You”, and it’s been impressive how they’ve been able to turn such a (relatively for them) odd song so rockin’, despite singer/guitarist Christian Zucconi sitting on keys for it. Of course, the rest of the band always helps out in the rockin’ department, like singer/keyboardist Hannah Hooper jumping around the stage (and sticking her tongue out more than anyone this side of Miley Cyrus), not to mention the likes of guitarist Andrew Wessen and drummer Daniel Gleason whipping their hair (Gleason’s has grown, but Zucconi seemingly just recently shaved his head – but what will Hooper dye now?). And special mention of new bassist Ryan Rabin, who’s as excited as anyone up there to be up there. Zucconi and Hooper did lots of going close to the crowd by standing on the speakers that were in the middle of the photo pit – he even crowd-surfed during “Bitin’ the Bullet” (and at one point threw his guitar like fifteen feet up in the air – and caught it!). And they closed their set by inviting Portugal members on stage for a cover of the classic “Teenage Wasteland”. 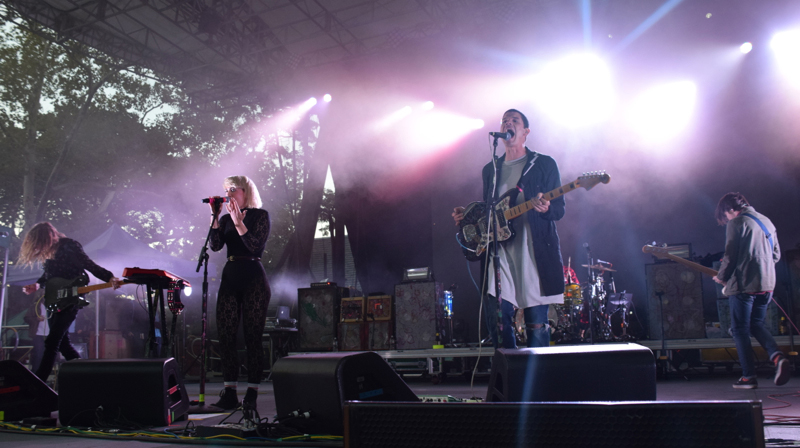 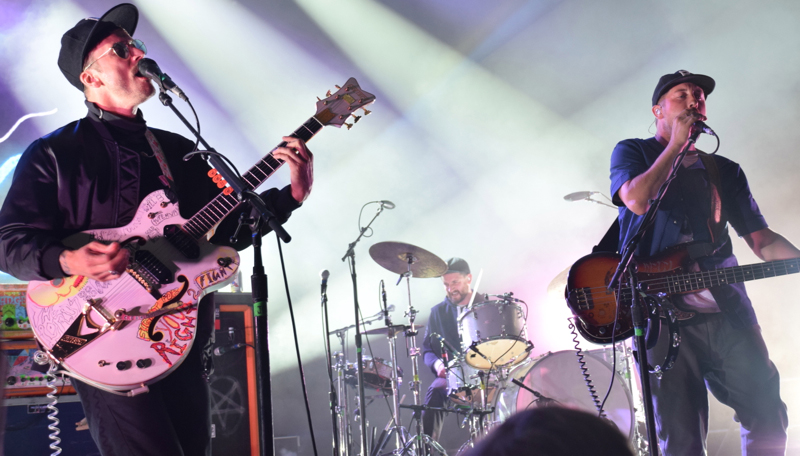 Click here for photos of Portugal. The Man from this show in the QRO Concert Photo Gallery 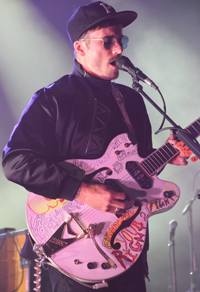 The classic covers continued when Portugal. The Man took the stage in earnest, doing “Brick In the Wall” – admittedly the legitimate aspiration of all psych-rock bands like Portugal. They did an extended jam version of “So American”, which included the chorus of Oasis’ “Don’t Look Back In Anger” (couldn’t they at least this moment cover an American song? Grouplove did Beyoncé’s “Drunk In Love”…). While Grouplove had been mostly flashing lights on stage, Portugal brought lasers (both did have a lot of smoke machine), which nicely lit up the trees behind the crowd in the arboreal setting. To close the night Portugal medley-ed into “Live and Let Die” and “Hey Jude”, inviting Grouplove & Typhoon on stage in some giant shared sheet with head-holes. 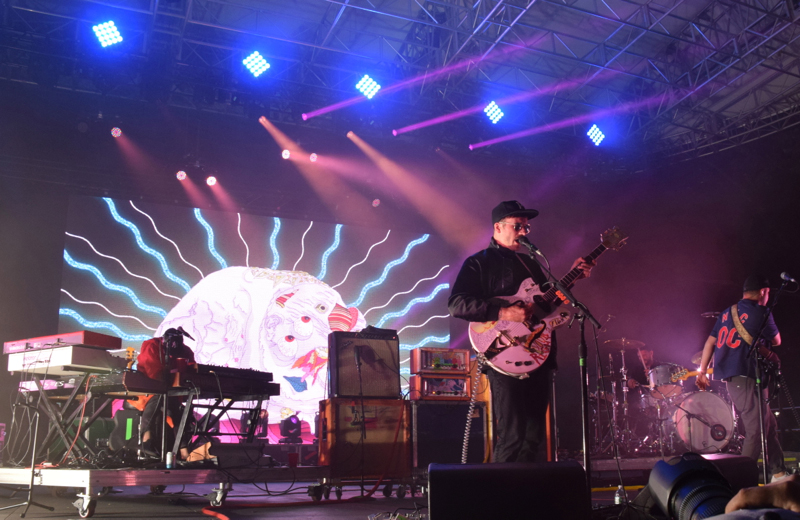 The Honda Civic Tour stop did have an actual Honda Civic being raffled off, and art from Hooper and Portugal’s John Gourley on display. No, it wasn’t the most indie of nights (though veritable alt-fest compared to last year’s tour of Maroon 5 & Kelly Clarkson…) – but what is, these days? And it was a great show.