<img src="http://www.qromag.com/wp-content/uploads/2012/10/hoobastankfightorflight.jpg" alt="Hoobastank : Fight or Flight" /><br /> Hoobastank have created quite a name for themselves in the past couple of years since their formation in 1994. ... 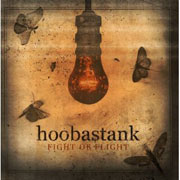 Best known for their pop-tastic single “The Reason”, which was released as a single back in 2004, Hoobastank have created quite a name for themselves in the past couple of years since their formation in 1994.  Comprising of Doug Robb, Dan Estrin, Chris Hesse and Jesse Charland, these guys have been going strong for quite some time, constantly releasing popular hits and tracks that no one will tire of.

Fight or Flight is their fifth studio album, with the band announcing the news that they were to be producing a new album back in February 2011 and it took them a good year to finally come up the title for it; a title which determines the very idea behind the album itself, a tougher and more intimate record in comparison to previous albums.  They revealed the first track and single of the album in May 2012 in preparation for the release of the complete album by September of the same year and it has to be said, it is of great quality with fantastic tracks and amazing riffs, though still comprising of the similar power chords and emotional outlet that they are so well known for.

The first track and single off the album, “This Is Gonna Hurt” is a fantastic start to a great album.  It’s heavy and gritty in both the vocals and guitar – a fitting sound for the context of the song itself.  It’s obvious from comparing this to their past songs that the band have certainly grown and matured over the past few years and the music has grown along with them.  The only thing that could bring this song down is the repetitive chorus that powers the song, however, in many ways this repetition could be seen through the idea of a chant in such a way that, in terms of the context of the song, empowers whoever repeats the lyrics in whatever applicable situation that may be occurring at the time.

The rest of the tracks follow a similar theme, such as: “Sing What You Can’t Say”, “Magnolia” and “The Fallen” displaying a softer edge than “This Is Gonna Hurt”, almost verging on the popular tracks they used to produce.  But, every single one is worth a listen in order to see how much this band has grown.