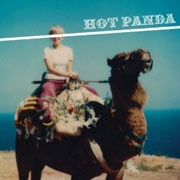 While they look like any other nice young folks from Edmonton (QRO photos), Hot Panda are an odd band, right from the name of their band & of their debut full-length, Home Come I’m Dead?.  While they have the garage-rock strains of seemingly every young band these days (and every record this writer reviews…), they use it in odd ways.  How Come can be somewhat off-putting and hard to wrap your head around at first, and some of the tracks are never more than odd, while others get lost in being not that odd, but there are also pieces that definitely work.

How Come opens with mock-baritone female vocals and strings in "Membership Fees (Intro)", and while the rest of the record doesn’t sound like that, the intro does let you know the kind of band that you’re going to hear.  Hot Panda use mostly a sharp garage-rock, often with a great back riff or breakdown/break-out like on the following "Evil Nature" and "Pools", but that’s the closest you can come to finding a standard thread through the record.  "Shoot Your Horse" has a mock-horror sad-country, while "1995" is a spastic blues explosion, "Masculinity" a sort of garage big-band stomp, and the odd (this time male) vocals return to closer "Late Night Calling (Outro)".  Note that those weird sounds are better than their weird descriptions, and never out-and-out annoying.

Click here for photos of Hot Panda at 2012 Primavera Sound in Barcelona, Spain in the QRO Concert Photo Gallery

Click here for photos of Hot Panda at SXSW 2011 in Austin, TX in the QRO Concert Photo Gallery

Click here for photos of Hot Panda at Maxwell’s in Hoboken, NJ on October 17th, 2009 in the QRO Concert Photo Gallery

And Hot Panda aren’t even consistent with which way is better – weird sounds or relatively more ‘regular’.  Played-straighter "Pools" is a stand-out, but so is the garage-crash with sly style "Fuck Shit Up" – while the sharp-garage "Start Making Sense" that follows the fucked up shit makes more sense, but is also forgettable relative to the rest of the album.  The first, somewhat more ‘regular’ half of the album is stronger, as the band tries one too many sounds – or maybe it just seems that way.

QRO is playing catch-up with record reviews from late 2010, and there’s a reason How Come I’m Dead? laid on the pile for so long – it’s an odd record, and not an easy one to review.  It’s not too odd, however – which would actually be easier to review, and dismiss, as ‘just odd’.  Can’t say that Hot Panda are there yet, or even exactly where it is that they’re going, but there’s definitely something to them.