While it’s easy to point out all the things that went wrong with The Hudson Project, we have to admit that there were a lot of good things that... 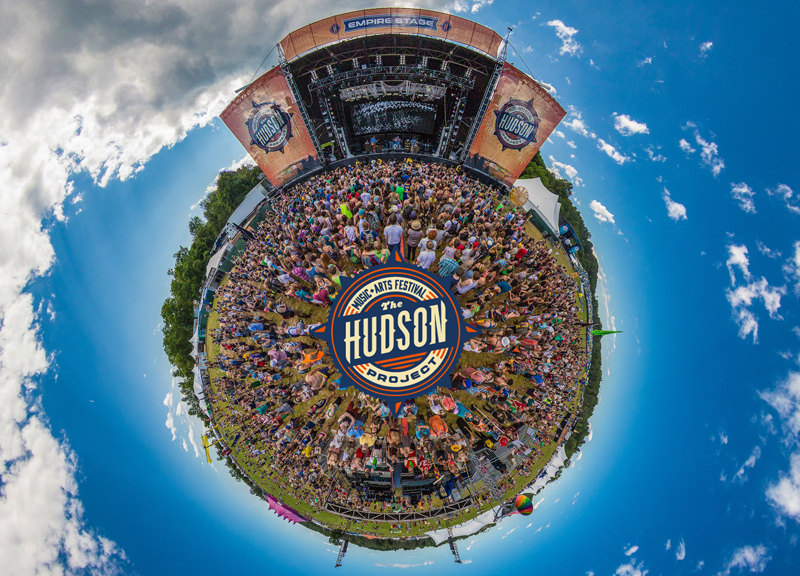 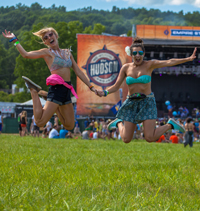 It’s been more than a week since the Hudson Music Project opened its gates up at Winston Farm in Saugerties, NY, on Friday, July 11th, and attendees are still upset about the tragic rainstorm (along with its gnarly after effects) that brought the festival to a bitter end. Organizers are refunding everyone for Sunday tickets, admitting, “Overall, the operations of the event were not up to our high standards.”

But while it’s easy to point out all the things that went wrong with The Hudson Project, we have to admit that there were a lot of good things that happened too. Though the mess was tough – the extreme security measures, the torrent of rain, the cancellation of highly anticipated sets – the artists and the attendees were creative enough to maintain the positive festival vibe amidst the unexpected circumstances. 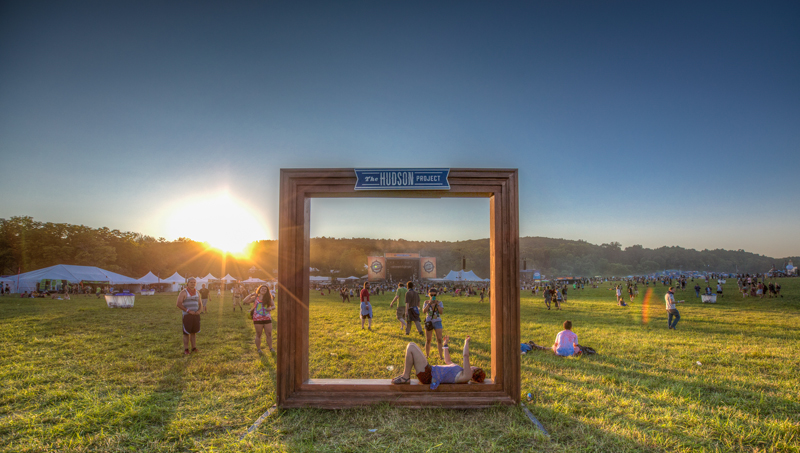 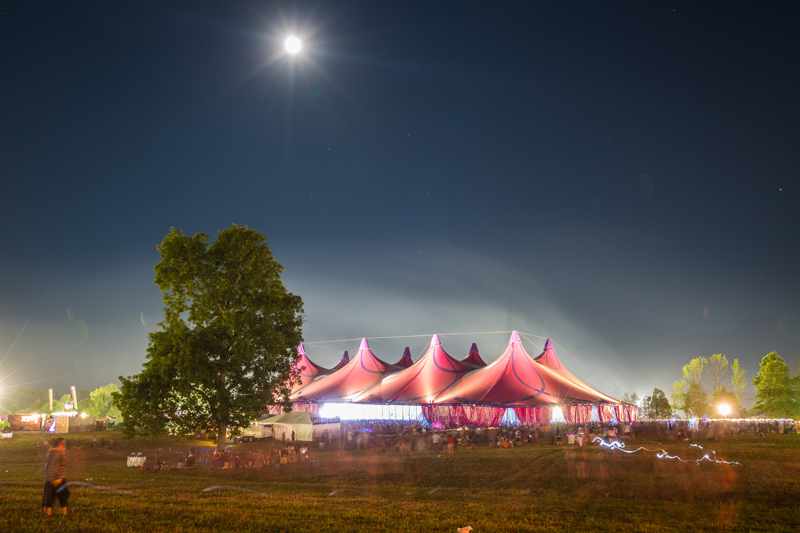 Although most of the attendees were up all night setting up tents, the venue started to fill up shortly after the gates opened up at noon. D.C.-based producer Lindsay Lowend started off the day at the crowded Circus Tent with his unique “neon” trap songs – including songs from his EP Wind Fish and an awesome remix of Ciara’s “Body Party”. At the Empire stage, Lettuce, the band that also played the Hudson Project pre-party at (le) Poisson Rouge in New York, was throwing down a funk filled set that revved up the crowed for the day. Next, the crazy indie rockers of Dr. Dog played on the main stage with more the energy and fun than probably any other band that morning. 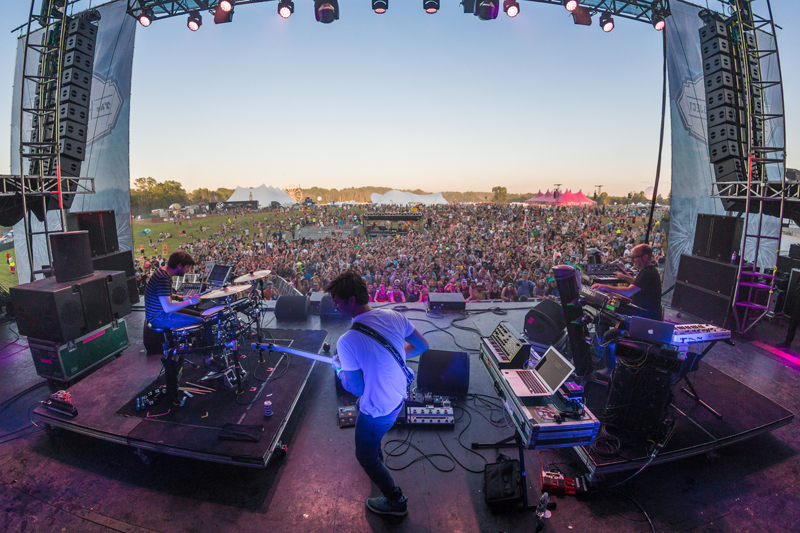 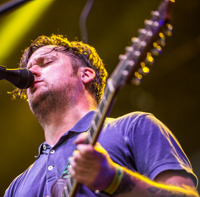 Producer Kill Paris, who was scheduled to play at the Circus Tent, was canceled last minute and replaced by a house DJ who presumably “sucked like crazy” and disappointed everyone who wanted to dance to Corey Baker’s melodic bass. To add to the frustration, Emancipator’s set was rescheduled from the last day to the first day, which was apparently a secret since many attendees did not know it was happening. Thankfully The New Deal, after a four-year-long hiatus, brightened things up later on in the day. Their danceable elevator music was eagerly welcomed with thunderous cheers and a nice little totem that said “Welcome Back New Deal!” Later, the main stage was swarmed with hundreds of Modest Mouse fans that were lucky enough hear all of their favorite songs throughout the hour and fifteen minute set. 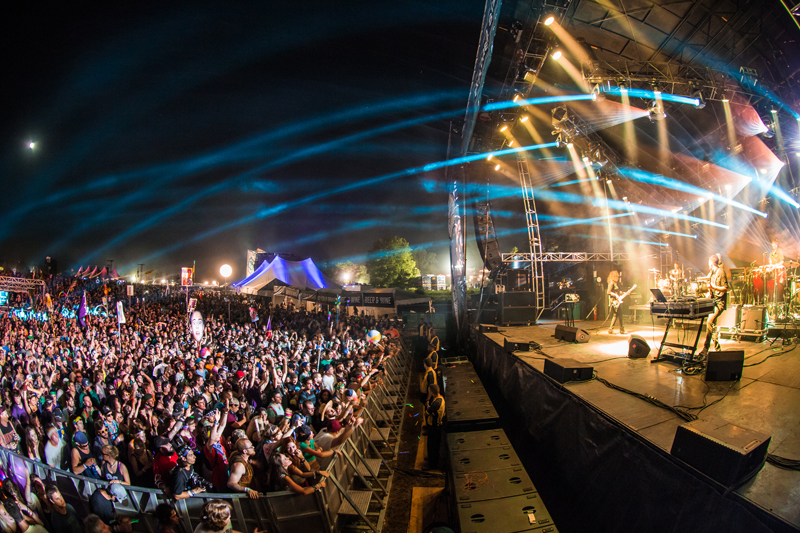 As the sun set on Friday, the almost-full moon was illuminated against a beautiful periwinkle sky, which set the perfect backdrop for STS9’s celestial performance. The band members, including their new bassist Alana Rocklin, played their seamless jamtronica in conjunction fantastic lighting. Although their set was shorter than usual, the band exited everyone by finished off with an uplifting variation of “When The Dust Settles”. 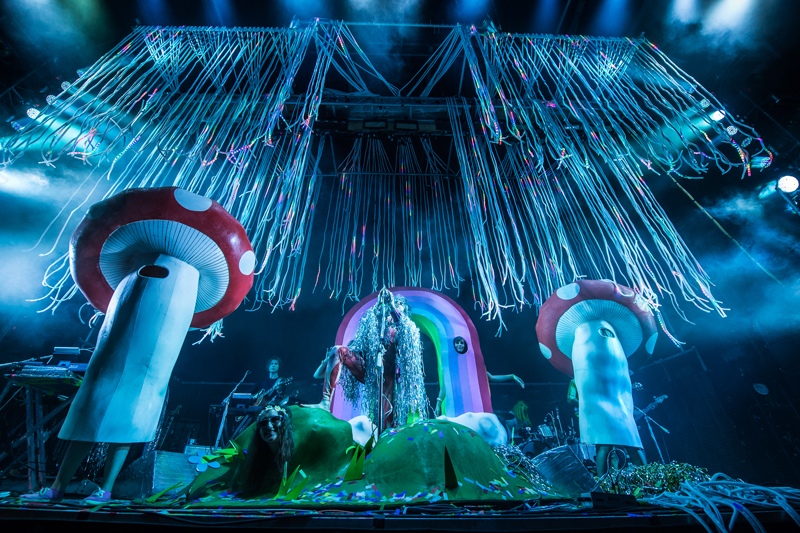 As usual The Flaming Lips won the prize for the most bizarre set of the festival. Wayne Coyne (QRO interview), draped in a tacky silver streamer cloak, declared, “This is when the party starts for the night!” and proceeded to perform “Yoshimi Battles the Pink Robots” with an army of giant mushrooms, caterpillars, butterflies, and fluffy rainbows. 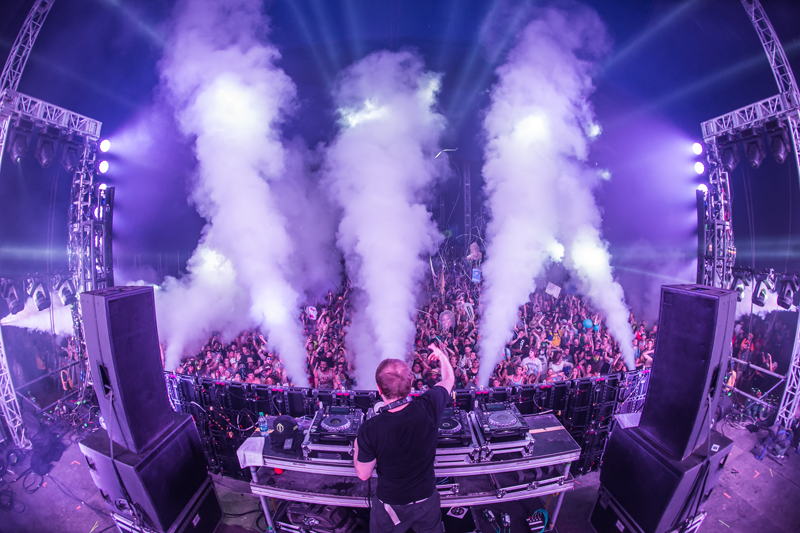 Excision brought dubstep back with a set filled with aggressive drops and beautiful interludes. But Flying Lotus had the upper hand when it came to bass. After demanding “more bass up in here” from the audio technician, Flying Lotus tickled ears with his unique style of structure-less psychedelic hip-hop. 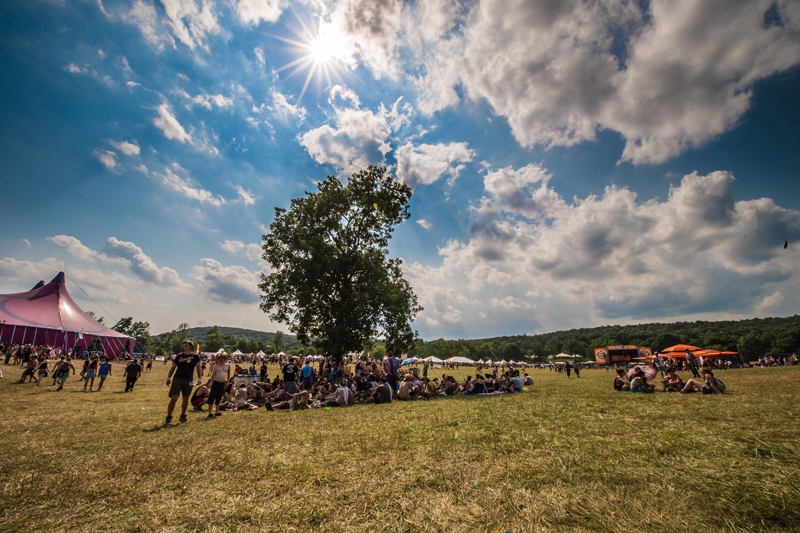 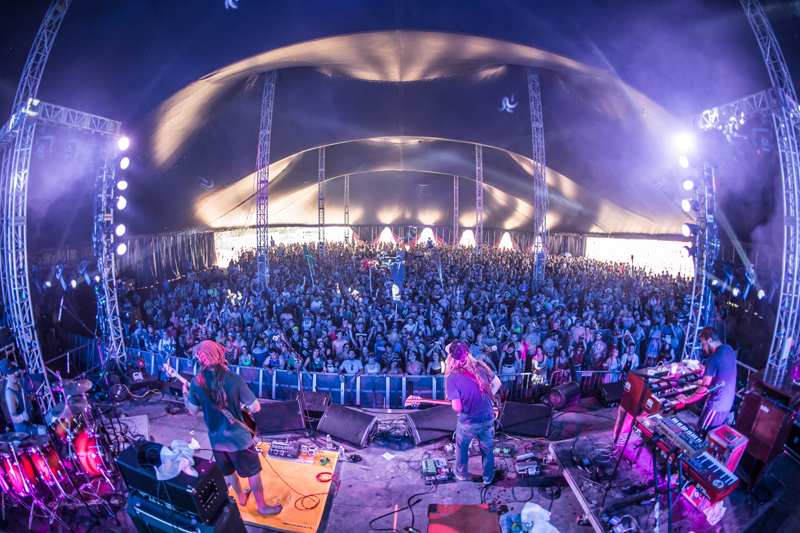 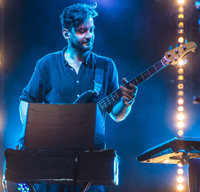 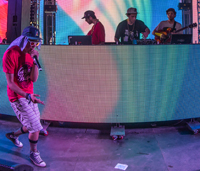 Everybody was up and ready on Saturday for Twiddle’s early afternoon jam session. Charged with a great blend of jazz, bluegrass, and funk, the Vermont quartet started off the day with happy vibes. Exmag played the next slot at the Circus Tent. His soulful productions were spiced up with a surprise appearance from Griz and his saxophone. At the Catskill Cave tent, Jacques Greene played an intimate and unusually energetic set for a smaller crowd. Later in the evening, Bonobo gave an amazing performance whose format deviated from their previous shows on the Northern Borders tour. Throughout the set they unexpectedly broke into segments of beautiful improvisation accompanied by clarinets, Szjerdene provided vocals, and Simon Green’s own bass guitar and buttons. As soon as Bonobo ended, everybody ran to the adjacent main stage to welcome Big Gigantic. Playing plenty of songs from the popular album Nocturnal as well as a few from the new The Night is Young, the duo blazed through the sunset slot with high energy. Their set was visited by a short rainstorm in the middle, but everyone continued to dance hard, if not harder, with every drop that fell from the sky. 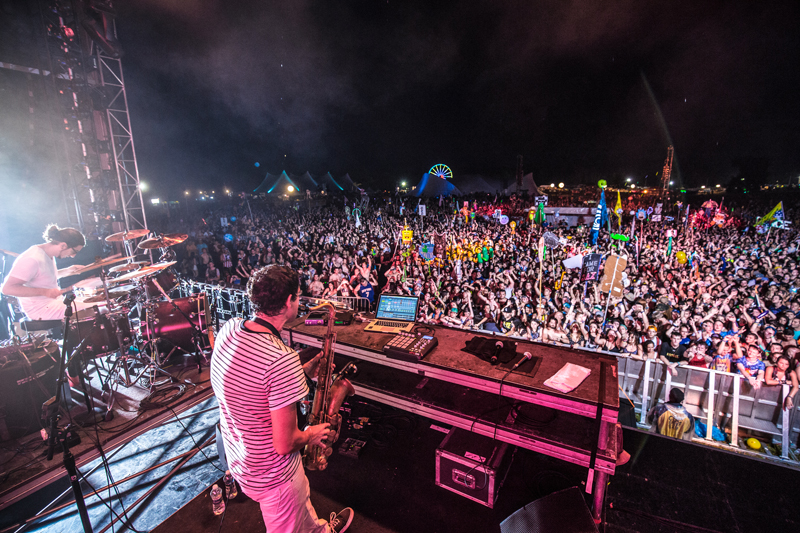 Jon Hopkins’ performance at the Catskill Cave was arguably the most creative set of the day (which means a lot since there were so many breathtaking performances on Saturday). As a producer he paints beautiful audio pictures, holding out every note long enough until it lands beautifully into harmony. He held the crowd’s attention from the first song “We Disappear” from his latest album Immunity. From there he dropped into “Open Eye Signal”, which sparked the crowd into motion for the rest of the night. Towards the end he reached back to his 2009 album Insides with the song “Light through the Veins”, which provided a light hearted break from his very intricate set. 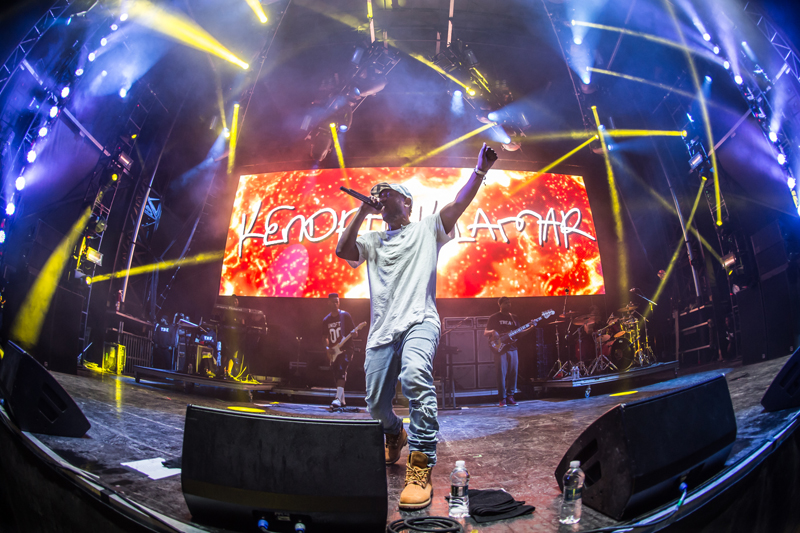 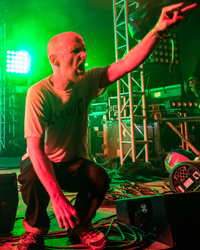 While Kendrick Lamar was rapping away at the main stage, British producer Gold Panda stepped up to bless the Catskill Cave with yet another ethereal performance. He creatively intertwined songs from his new album Half of Where You Live with the older Companion and Lucky Shiner. Four Tet continued the experimental electronic streak at the Catskill Cave with his meticulous yet dynamic beats. The incredible day was closed out with the renowned producer Moby, who strung together beats from various genres in a cohesive manner, all of which perfectly encompassed the diverse yet interconnected spirit of The Hudson Music and Arts Festival. 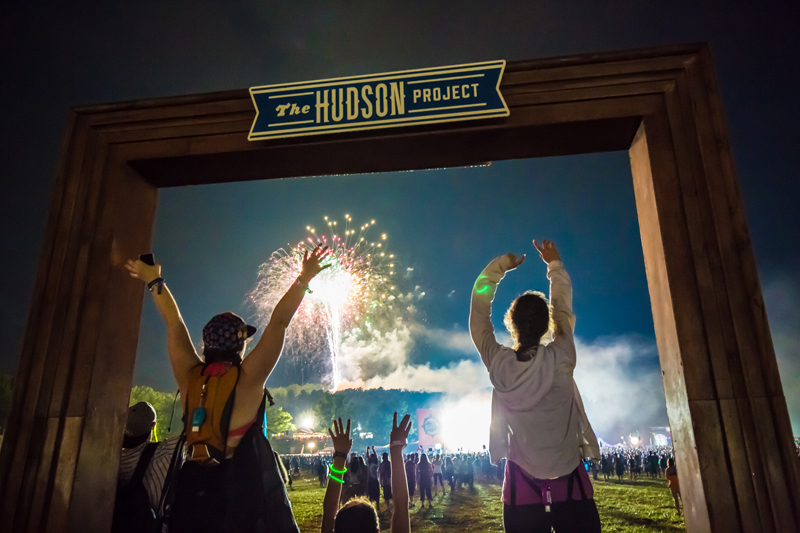