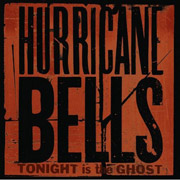 Lots of indie-rock artists enjoy doing solo alt-country side-projects.  It lets them utilize/show-off their musical skill, without having to drench it in studio magic.  Based in undistorted guitar & vocals, alt-country is a style that lends itself to solo work.  It’s different from their ‘regular’ band, but not some random stylistic change.  And there’s little pressure involved, as no one expects fans to follow the artist into alt-country, if the fans don’t like alt-country.  So there was little to make a stand out of Hurricane Bells, the alt-country solo side-project by Steve Schiltz, singer/guitarist of Longwave (QRO album review) – until his Bell b-side "Monsters" got put on the massively successful soundtrack to the even more massively successful Twilight: New Moon (QRO soundtrack review).  Now his Bell debut, Tonight Is The Ghost, which was supposed to be self-released, is coming out on emo-alt label Vagrant (Saves the Day, School of Seven Bells), and stands up to the further scrutiny.

Now, Tonight is a solo side-project album; the songs don’t feel wholly finished, and don’t vary enough, as is often the case with such records, which are usually collected side-musings by one artist, recorded & released with little extra production involved.  And, while definitely alt-country, Schiltz retains Longwave’s alt-expanse on pieces like "This Is a Test", "The Winters In New York" and closing instrumental "Tenterhooks".  However, those stand up as some of Tonight‘s best tracks, as alt-country-meets-indie-expanse provides a strong sound.  When he tries to go more choral, such as "I Can’t Remember", or haunting, like the following "Tonight I’m Going To Be Like a Shooting Star", he can get a big boring.

There are some signals of something more than just an indie-rock solo side-project to Hurricane Bells, even if its strum doesn’t set the world on fire.  Penultimate "The Cold Has Killed Us" ventures into the experienced, effective indie-country/folk terrain like a poor man’s Band of Horses (QRO live review) – but ‘a poor man’s Band of Horses’ is nothing to sneeze at.  Especially for another one of the millions of alt-country solo side-projects by someone in an indie outfit (New Moon or no).