<img src="http://www.qromag.com/wp-content/uploads/2012/06/iliketrainstheshallows.jpg" alt="I Like Trains : The Shallows" /><br /> Possibly the first I Like Trains record (under any name) where you don't need to know the odd subject... 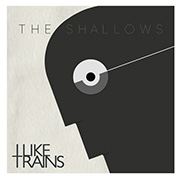 I Like Trains have always had an odd spot in the annals of today’s music, mixing epic post-rock with concept songs & albums about odd pieces of history – even their name, iLIKETRAiNS, stood out.  But in some ways that was just the beginning, in their debut EP, Progress/Reform (QRO review).  Starting with the full-length debut after it, Elegies To Lessons Learnt (QRO review), the group has shifted from a post-rock historical oddity into something smoother, if still tragic, and that has reached further on their latest, The Shallows.

Click here for photos of I Like Trains at Magnet Club in Berlin, Germany on November 4th, 2012 in the QRO Concert Photo Gallery

Click here for photos of I Like Trains at Borderline in London, U.K. on May 7th, 2012 in the QRO Concert Photo Gallery

Click here for photos of I Like Trains from 2012 Live at Leeds in Leeds, U.K. in the QRO Concert Photo Gallery

Click here for QRO’s review of I Like Trains at Bull and Gate in London, U.K. on September 21st, 2011

Click here for photos of iLIKETRAiNS from CMJ 2007 in New York, NY in the QRO Concert Photo Gallery

Now, this is still I Like Trains we’re talking about – The Shallows is still a loose concept record, based around Nicholas Carr’s book last year of the same name; however, this time I Like Trains have picked a modern book about a modern subject (‘Is the internet making us stupider?’).  Likewise, their sound has ‘modernized’, at least in that they’ve shifted from guitars (so twentieth century…) to more electronics & synthesizers, today’s instruments.  However, they have not lost the tragedy, not the in the least, from the pressing ‘great man’ tragedy of opener "Beacons" to the darkly, sadly proceeding closer "In Tongues".

But it’s a more danceable tragedy, at least in the sad dancetronica backbeat on pieces.  This is best exemplified in "Reykjavik", which is both more atmospheric and more personal than I Like Trains have ever been before.  Contrastingly, some of the more ‘retrograde’ ILT tracks like "Water / Sand" are a little unremarkable amidst The Shallows.

Possibly the first I Like Trains record (under any name) where you don’t need to know the odd subject matter, The Shallows is their furthest step yet.