<img src="http://www.qromag.com/wp-content/uploads/2008/12/illinoisadventureschapter2.jpg" alt=" " />Illinois goes down home in their latest installment, as the one and only <em>Kid Catastrophe</em> pulls out his trusty banjo in <em>Chapter 2</em> of his... 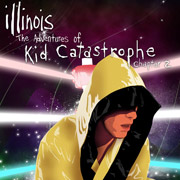 Click here for QRO's review of Illinois as part of Central Park Summerstage on September 10th, 2008

Click here for photos of Illinois at Bowery Ballroom in New York, NY on March 2nd, 2008 in the QRO Concert Photo Gallery

In the first chapter of Illinois’ ambitious six EPs in six months, the Bucks County, PA band leaned more towards their electronic and beat-oriented side (QRO review), but in The Adventures of Kid Catastrophe, Chapter 2, the band goes with their backwoods nature as singer/songwriter/Kid Catastrophe Chris ‘Arch’ Archibald (QRO interview) pulls out his trusty banjo.  Yet, while Illinois swing to that side of the technological divide, they don’t avoid the upbeat-downbeat dichotomy of their debut What the Hell Do I Know? EP (QRO review).  Though not as strong as their amazing first two releases, Chapter 2 is still another worthy installment.

Click here for photos of Illinois at Webster Hall in New York, NY on November 11th, 2007 in the QRO Concert Photo Gallery

Opener/single “She’s So Blonde” sees Illinois bring out their down-home good times, something that was relatively missing in Chapter 1.  With help from a particularly strong bass line from bassist Martin Hoeger, Archibald plays it wry with his fuzzed vocals, yet the group also delivers a great group chorus.  The low-tech take is about the only thing “Blonde” has in common with “Where’s My Woman”, which draws instead from the touching, emotional, soft side of Illinois.  Reminiscent of some of the stripped, simpler work of late-period Beatles, “Woman” has a moving, melodic beauty.

Unfortunately, finisher “I Hate Love” is the weakest piece so far in the Adventures series, as the track is kind of boring in its choral kids harmony.  While not a deal-breaker in any respect, considering there are only three songs to Chapter 2, it is a major piece of the pie.  Also on the EP is the second Adventures video from Archibald & Los Angeles’ People-Food, the video-within-a-video ‘Arch Sees an Illinois Video on TV’:

Click here for all of Illinois' upcoming dates in QRO's 'Spotlight On : Illinois'

Even as Illinois has gone lower-tech and back into the past with The Adventures of Kid Catastrophe, Chapter 2, they’ve also made an interesting step into the future of music retail: one can purchase the entire six-chapter series on custom USB flash drive, with the first two Chapters already uploaded, and will be able to download each next chapter at any of the band’s subsequent record release parties.  Perhaps taking a cue from stage-mate Say Hi (QRO photos – when on the bill with Illinois) – who Radiohead totally ripped-off of/stole the limelight from in their ‘pay-what-you-will’ strategy for In Rainbows (QRO review)… – Illinois are getting inventive with their distribution strategy, and proving there’s still much more to come from Kid Catastrophe.