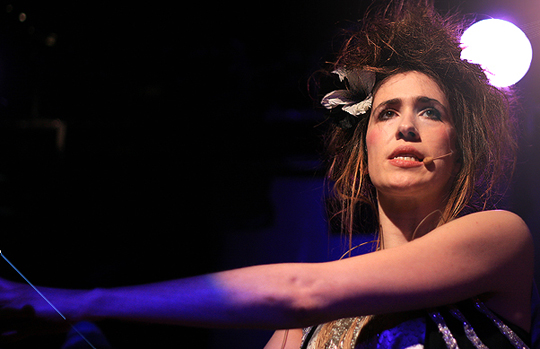 Click here for photos of Imogen Heap at 2019 Boston Calling in Boston, MA in the QRO Concert Photo Gallery

On Tuesday, February 9th at Leeds Metropolitan University, Imogen Heap arrived on stage looking very elegant with an interesting hairstyle.  As she stood on the stage, at one point holding out a little blue bird, you could almost imagine it making a nest in her bouffant! 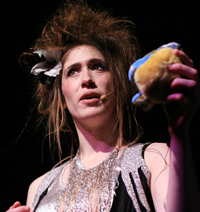 It was a diverse evening full of conversation with the crowd; there were talks of music and sexual innuendos.  Tim Exile is one of the support acts that are with Imogen Heap for the U.K. tour, and his sounds compliment Imogen’s style very well.  Throughout the sound check, Exile shouted over the mike, “Can you plug Imogen into me please?”  The audience reaction showed that they had other visions, which weren’t the technical sort in mind!  Imogen replied, “Lets talk about the strap-on later…”!

Members of the crowd also screamed out, “Where’s Jason Derulo?”  Imogen talked of how happy she was to be part of the new hip-hop tune produced by Jason Derulo.  He reinvented the popular song, “Hide and Seek”, which has recently hit number one in the charts. 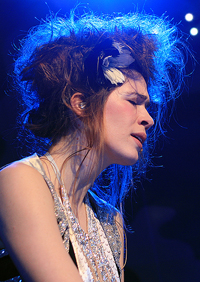 During the evening, Imogen filled the room with catchy electronic melodies.  Various obscure instruments were used to create sounds.  During the performance the security guard stood looking stern and oblivious as Imogen began to swing a long white tube, creating hollow echoing sounds.  Imogen almost knocked the guy out; fortunately for him, he was safe.  However, twice Imogen hit the tall white wooden tree prop, but it was okay… nothing catastrophic! 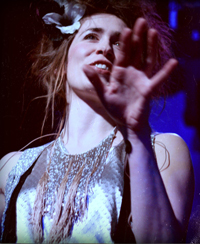 “Tidal”, featured in the new album Ellipse, was one song that went down well.  Old school fans waited eagerly for the encore.  “Hide and Seek” was much loved, and the crowd joined in.  Later Imogen gave each section of the room a section to sing of the song “Just for Now”.  The room was filled with beautiful pre-recorded and real-time vocal harmonies, which created interesting vocal sounds.  Microphones were also plastered to Imogen’s wrists, helping to create interesting vibrations.

Imogen certainly has a very inventive way of doing things.  Tim Exile also made sounds with a large futuristic-looking joystick, which is connected to his pedals and laptop; he seemed to press buttons to trigger off electronic sounds that fill the room.

Imogen is still on tour – Check the dates out!  You will not be disappointed.