Out of the Joycean streets of Dublin strides Inhaler, to quietly demonstrate the third escalator to the celestial: do both, and with grace.... 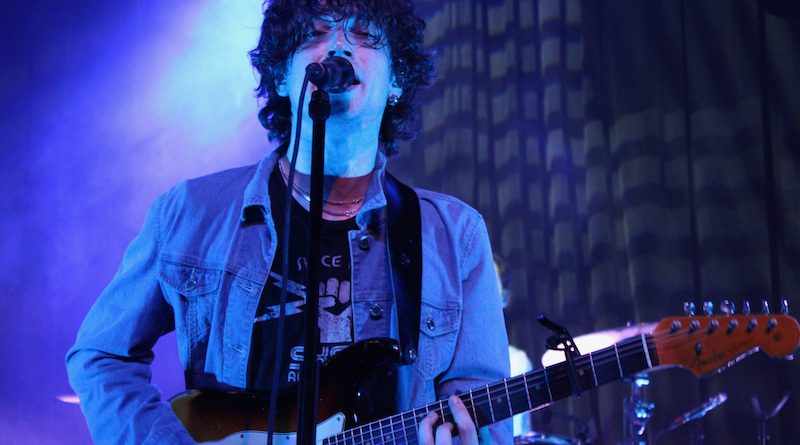 Click here for photos of Inhaler at 2022 Lollapalooza in Chicago, IL in the QRO Concert Photo Gallery

Click here for photos of Inhaler at The High Watt in Nashville, TN on November 24th, 2021 in the QRO Concert Photo Gallery

We are all currently living through what Guitar Player magazine Editor In Chief, Michael Molenda, shrewdly referred to as “the era of informational inconsequence.” Overwrought with the obsessions of trash culture as they are commercialized and commodified by nauseating non-stars, much of what gets labeled eclectic today is little more than a bit of extractive tourism, deceptively dressed. Music – real music – has been hit hardest by the march of the mundane and dying of hospitable overexposure, like Venice, since the days of the first illegal downloads (screw you to this very day, nasty Napster).

What the internet has willfully forgotten is that star power cannot ever be lab-created, no matter what the sad Snapchat filter told you last night when your face looked like bad anime mixed with Day Three Bonnaroo. There are only two ways to be a true supernova in this life: you either get born to it by serendipity or you earn it by sweat. Out of the Joycean streets of Dublin strides Inhaler, to quietly demonstrate the third escalator to the celestial: do both, and with grace. The charming Celt cabaires did exactly that, and much more, at Atlanta’s Terminal West on Friday, March 4th, kicking off their hellaciously hot and long-lusted first proper North American tour in a city that had never seen them but gleefully received them like the anointed. In the redemptive example they set across a scintillating set of thirteen of their most decidedly consequential songs came what felt like a raw prayer answered in radio pulses.

Inhaler is a band of boys like Belisha beacons. They blazon the way at a particularly enchanted kind of crossroads and serve as signposts for longform legacies of light. Theirs is an ardent, shape-shifting breed of rock, unseen at this decibel and with this level of sincerity on any shore for far too many years. Inhaler is also a band only Ireland could have incubated. Debuting the name of their band the same year that same-sex marriage was legalized in Ireland (2015) and releasing their first single, “I Want You,” just before the abortion referendum was tardily passed half a year later, Inhaler’s cultural relevance both at home and abroad has blossomed in near-perfect tandem with some of their country’s more historical and volatile political flashpoints. For that, they sound and look like what they will have naturally imbibed, being what they are and from whence they come. All of this is intended as the highest compliment to the band, for surely posterity will be forced to admit that no one ever did hybridity or hearts-on-sleeves any better than we mad Irish.

Witnessing Inhaler live is a bit like making friendly eye contact with a Tasmanian tiger passing you on the sidewalk of your quiet suburban cul-de-sac, casual as all get-out in its intense extinction. You do not dream such a thing could be, but your childhood self immediately believes it because some part of your sonic soul has been silently waiting for just such a shard of pure-return chimera, and you’ve just enough unmarred purity left in you to accept its corporeal reality when you finally do see it. Imagine that an 808 and a 303 existed in one instrument – a planet of possibilities and configurations of all the best parts of the past never imagined in this or any solar system before. Imagine that a collarless cur could be swanky like Snoop. All of this is Inhaler.

It is simultaneously soul-resuscitative and your heart’s undoing to see a youthful band burst forth with their own rock-n-roll rebel proposal, finally – one that implicitly understands the gift and its toll, no less. The fact that Eli Hewson (vocals), Robert Keating (bass), Josh Jenkinson (guitar), Ryan McMahon (drums), and Louis Lambert (keys) have long since been likewise showing instinct for making the orbital dynamics of the press game more divination tarot and less devil’s Uno? Just turn this pen-pixie pot roast over on the spit and throw earth on the pit. She’s done. The Gaelic word for Inhaler’s stage presence, the manner in which they have traipsed along amidst the torpedoes of touring life as though they were taking tea at your Nan’s, and the way that you will inevitably feel when speaking to them or watching them play music is “seascair.” Comfortable.

Charging straight out of the gates with the album-leading “It Won’t Always Be Like This”, Inhaler could have come out and hummed their respective parts of this vascular vibration and you would still receive the message in this music through every standing antenna of hair on your arms and neck: this song and its itinerant sentiment is these discerning men’s sonic-mnemonic for their own fugitive youth. It is also the bright-hearted pandemic motto of all time – and one that has been spray-painted under bridges and posted up on billboards after the release of their record but independently of their marketing team – and a song that has dominated Radio 1, Absolute, Radio X, and Virgin with rampant universality as well as stood in for immediate answers to those grappling with depression and hardship of every stripe.

When you hear these dauntless Dublin duines breathe “It Won’t Always Be Like This” to lightning-life in front of you, you will certainly know all of the manifold reasons why. Spoiler alert for the snide: it ain’t the inherited industry connections those who are short on creative compatriots and common sense but long on criticism make so much of whilst they are pretending bald jealousy is anything but. It is the indices of poetry and potential pouring out of their every pore. It is the fact that profundity and playfulness have not met on such a perfect pitch anywhere in literate rock since Pulp.

“We Have To Move On”, even on the record, is one of the places listeners really get to hear Hewson’s stunning vocal power do its controlled ricochet between the sun, a comet, a ribbon, and a feather. In the live setting, he effortlessly turned a gaggle of grown men in the back who were only originally there because they had brought their daughters into clapping Clarence from Coming to America, a cheering chorus of “Damn, that boy can sing!” Nothing sweeter than a mind changed irrevocably for the better.

Nothing perhaps save “Ice Cream Sundae”, one of Inhaler’s oldest and most crowd-cherished chorales, which they have honed to harmonic Heavenly Hash in the way of Bentonia bluesmen, the untold hours of repetitious rehearsals and recipe refinements over the years whipping this sugarplum of a song into the ear-confection it absolutely is today. The cherry on top of hearing it live was watching fondant falsettos melt out of manful mouths in the crowd who had only moments before sworn they were ten scoops too cool to ever sing and sway in public.

If any of those temporarily treacly taskmasters wanted their Morrissey-like moue immediately returned to them, Inhaler obliged before being asked with a floor-rattling rendition of “When It Breaks”. Sounding live as if scraped into gravity-defying shape by a palette knife, this one put me in mind of something our whip smart darling Liz Phair once said about anything creative: you’ve got to think like a pagan. This song does. Onstage, it stalks into Bacchus, exuding an inviolable pungency like uncultivated ramps and a medicinal vitality akin to yarrow. Both the monarch-mien and the creature-gait were maintained in “My King Will Be Kind”, which is gorgeously arch and provocative in the way of Lagerfeld.

That a band as short in the tooth as Inhaler should already be so adroit at presenting next a rabbit-soft song like “Totally” – which is essentially an orchestra of owls dream-chirping under the Northern Lights – and can then maneuver right into something as protean as “Cheer Up Baby”, a lustrously upbeat song about finding the craic in the cracks, with just a tune in between is staggering. With every motley melody, Inhaler has the guts to show you something true, and to do it in a way that makes you think a little night-blind haberdashery has been draped over early-1980s INXS. Long may they remain so utterly untamed and naturally regal.

Sending home a frothing Friday-night crowd that would have happily slept on the cement floor to sing with them all weekend, the boys from Blackrock bid Atlanta adieu with chart-chewing single “My Honest Face”. An anthemic amhrán about the prescribed fires we all have to set in the wild thickets of romantic love, this song has long been the aegis of Inhaler’s already recognizable and stately signature: depicting all the twin brutalities and beauties of life with a crystallized finesse far beyond their chrysalis years.

In person, and everywhere, the Inhaler lads are tangibly cool in the way Zippos used to be in the Nineties (or still are, if you are like some QRO writers harboring an acid aversion to anything that happened to niches once cellphones obliterated secrets). There is nothing dilatory or tongue-bored about their way of going as musicians or as males. They are alert, interested young men, and their collective energy feels like that one Waffle House that still has a cigarette machine, and all the third-midnights you ever hit it up headed home from a heavy metal show at 3 a.m. on a school night before you had your license. Perhaps most refreshing of all is their concentrated lack of inquietude – the staidness of them. Inhaler is observably not taste-testing openness and self-actualization as a meditative experiment; they just are those things too. They will remind you of Big Star on about four different levels as well. All puns intended, by the way, as that is most assuredly what they will soon all be. Their Pequannock-by-way-of-Pacific-coast parallel, the prince that is Pete Yorn, would say: ‘Cos it already is.

Go on, then. Take out this Galway gal’s fit-to-burst pride that these are my Irish brothers, out here humbly conquering the cosmos way beyond the borders of our shared Emerald Estate. Set aside also all of my limitless love of their origin story and my rapture at what they represent to so much more than rock music. Even with all of that removed from the eschatological equation, this band still matters past measure because the world is waxing terrifyingly low on bands that can matter to this degree, and with this proportion of paladin positioning.

Sporting sold out shows on more continents than you can count, it is still as easy as it will ever be to go see Inhaler become what few bands today have the balls to bleed the right way for. It won’t always be like this. This time next year, no one will be able to get anywhere near these buachaillí in venues this small ever again, unless the fellas just decide to play a few little legendary dives here and there to keep their spirits clean and their shoes dirty. Boasting one of the more deservedly impressive oncoming tour schedules of recent rock-n-roll memory, Inhaler are headed up the swelling curve on the tall side of a cresting wave right now. You are most definitely going to want to see it when it breaks.