When I saw Counterfeit at Knitting Factory, I didn’t know the history of the band.... 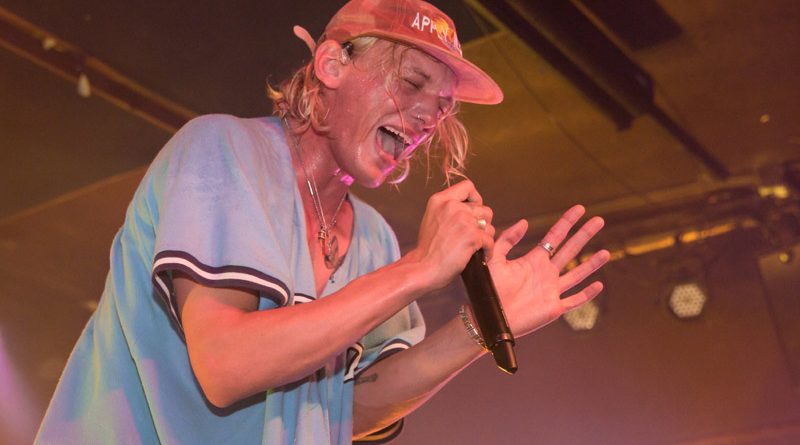 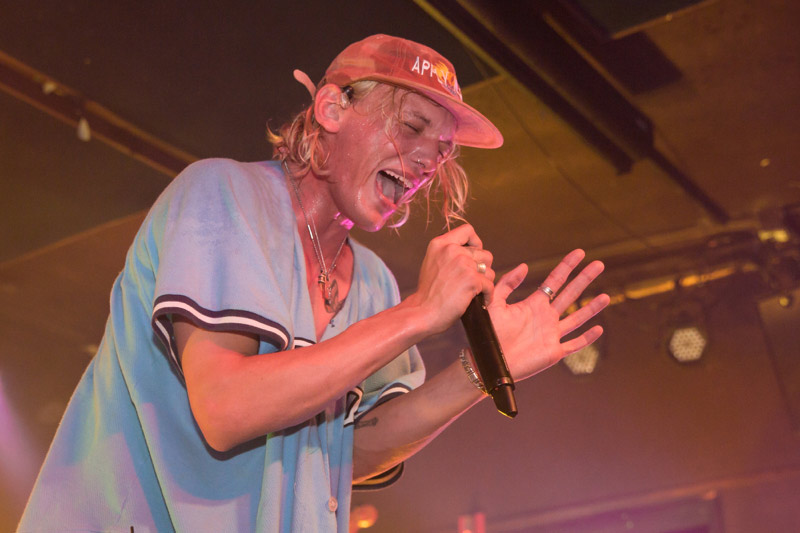 When I saw Counterfeit at Knitting Factory (QRO venue review) last year, I didn’t know the history of the band.  I had heard their punk/rock debut LP Together We Are Stronger and wanted to see this band that had been voted Best Live Act in 2017 at the AIM Independent Music Awards.  I had arrived early and discovered many young women already in line.  Turns out the lead singer, Jamie Campbell Bower, was an actor and had starred in the Twilight Saga (QRO soundtrack review).  While I did end up needing my earplugs to block the screaming even more than the music, it was definitely the music and the band’s hard-hitting show that left a lasting impression.  Fast forward to 2019 and Counterfeit has not only signed with a new label, Lava/Republic Records, but just released a new single “It Gets Better” last Friday! Prior to their show at Knitting Factory on Tuesday, September 10th, I had the chance to interview the band.  Lead vocalist and guitarist Jamie Bower talked about the inspiration for the single.  “Roland and I wrote it in Los Angeles this time last year.  It’s a sort of rebel rousing self-help anthem for myself ultimately.  It’s a phrase that I had written down on a notepad for like six months and I wanted to use it in a song for a really long time. Roland and I got to this really sensitive place that we wanted to use it in and it fit perfectly.  The sound change is about embracing hope, embracing self, pushing forward, pushing through and in a sort of like embracing that inner child.  It’s kind of what it’s about. It’s about sort of the “This is who I am”.”

In hearing the song, I immediately connected with it given the political atmosphere in the States over the last few years.  “It gets better” has become a mantra to myself and many of my friends.  “You have to believe it gets better.  It’s actually really nice that you brought that up because the song, first verse is very personal. It’s very self. Second verse is looking at the world from a larger perspective.  I actually wrote the second verse for my doppelgänger who’s called Erika Linder. Hence, I use the words, my sister. It’s sort of looking at her and speaking to her and being like “no, no, things will change.” We have to get through it so, yes, there is both a social and personal element to the song.” 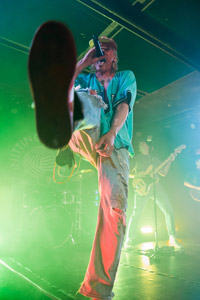 While referencing the single in particular, there is an overall change in the sound and tone of the new music and of the full record.  Their first studio album was much darker but there’s a stronger note of joy and positivity with their new songs. “I think that we sat in a place with album one for so long.  You can only sit in a feeling so long before it consumes you entirely and before it starts to, I believe, suppress you. When it came time to writing this, there was a definite conscious effort to push through the barrier of pain, of sadness, to get to a place of joy and of hope. I think that’s what we were trying to do.  It was certainly a conscious effort but we’re still pissed.  We’re still mad.  There’s still a lot of shit to be fucking mad about.  You know what I mean?”  Sam Bower, guitarist and Jamie’s younger brother, expanded on the change in sound.  “Everyone was just a bit numb, I think, and everyone was so angry about everything all the time that we’re not really angry about anything at all.  We just pushed ourselves. Do something that’s going to make me take a step back and be like all right. That’s got legs. That’s actually more effective.”

Counterfeit has been playing a lot of their new music at various festivals and the reception has been incredibly positive even though Jamie admits he “was a bit afraid“.  As we laughed about my initial reaction to discovering their fan base, Jamie thought about whether their new sound was something that “they vibe with.  I don’t know.  It’s certainly not a conscious effort to do so.  If I’m being totally honest, existing in a world of pain and anger for so long is so hard that when you start becoming that, you lose a sense of self.  And I felt like at the end of the cycle of album 1, whilst I was very connected to the first record because it’s deeply personal and it’s deeply open and it’s deeply honest, I needed to go back. I needed to go back to being the child again. And I’m a sensitive guy. That’s what I am. I’m a sensitive individual that cares deeply about love, that cares deeply about my relationship with other people and is trying to figure out his way in this world and I’m kind of ok with that.  I think that’s the main thing but it’s never been like “let’s make it for the fans”.  Bassist Roland Johnson agreed.  “Yeah, it’s always been for us.  Playing and writing and creating is that release for us.  Let’s do things in a way we’ve never done and let’s see where it sits. Let’s explore and grow as writers. We’ve grown as people. That was four years ago. Let’s see how we’re feeling now.”

With the band spending quite a bit of time writing new music over the last year, Jamie described their writing process as “furious“, whether he’s writing by himself or the band is writing collaboratively.  When he’s working on something specific though, he likes to be by himself.  “It’s important to me that I’m connected to myself and I think because sometimes I’m sort of a people pleaser. Occasionally, I can also not be a people pleaser (laughter).  I like to get positive affirmation of a few things to please people that aren’t necessarily totally connected to who I am. Hence, I like writing alone.”  “There’s this one song on the record that we wrote together in a room. Took us two/three hours. Started with a chord that Tristan had. And I just said, “This sounds dope. Let’s fucking roll with that”. Took it. Had a whiteboard on the wall, write fucking lyrics down as we went, stopping, starting, writing, something that works, that doesn’t, that feels real, that doesn’t feel real. Even up to the fucking recording process when the manager was like “The chorus doesn’t sound like a fucking chorus”.  So I start singing the chorus differently and I go back into the control room and I’m like “Fuck you! That’s not right. I was right the first time!”  Go back out there, do it.  That’s the real shit right there.”

One of the funniest inspirations for a lyric came from the time the band spent writing in Northampton. Sam remembers, “There’s a lyric about temperature [laughter]. We were living in this house and it was so bloody cold and everyone’s wearing like seven layers the whole time. I was away for a week and when I came back, Jay was like “listen to this”. And there’s a lyric in it “I’m six months colder”. I was like “is this about the past ix months?” He was like yeah. It was so fucking cold. I cannot just sit here and moan about it to everyone. I had to solidify it in this way.”  Everyone agreed, “It was SOOOOO cold”!  What always and continues to amaze me are those little things that happen in life that are easily ignored but become relevant and inspiring when you’re writing music. 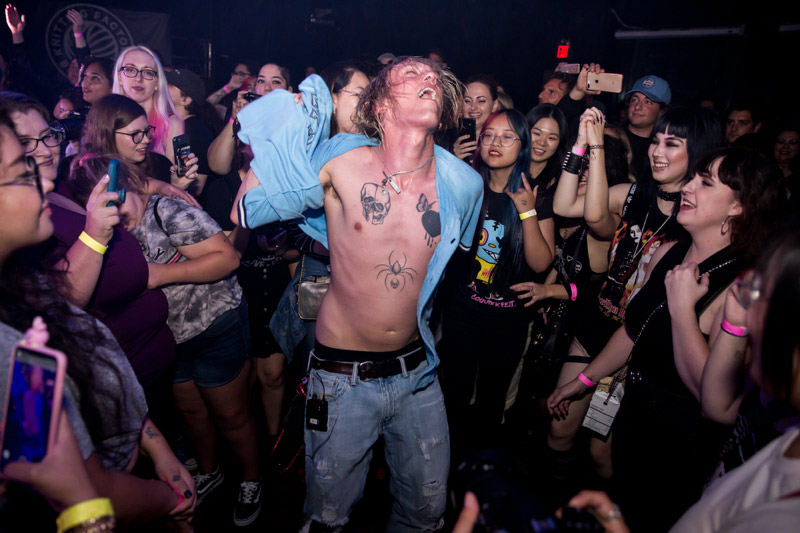 The band was very positive about their new relationship with Lava/Republic Records and about the support both from a business and creative perspective.  Part of that support brought us the character that adorns the band’s new t-shirts.  “I want to try to create a world that we all could live in and that we could all exist in. And we sort of create this beautiful and childlike, wondrous and gorgeous. And I want to create a character based on a bear that I have, a fucking teddy bear that I still have with me. It’s sat on the tour bus right now. I shit you not!  I want characters based on ego and characters based on addiction and I want characters based on self-loathing and basically all the things we feel as human beings put into this world. They’re like we’re going to animate the shit out of this.  So they come back with all these animations.  I’m like this is the coolest fucking thing I’ve ever seen in my life. It’s so sick.”

With the fans looking forward to the release of the new record, the timeframe seems to be sometime in the next six months.  “Oh dude, who fucking knows [laughter]? At some point. Like anything we create, I just want to push it out there as soon as possible. So if it were up to me, it would be tomorrow, but there’s potential that it could be end of the year, beginning of next year.  But between now and then, we’ll be dropping all the singles and we might even get to a period of time where…in between the time of releasing the singles, we’ve made another record [laughter].”  If the packed venue was any indication, Counterfeit has a legion of fans ready to listen to everything the band has to say with their new music. 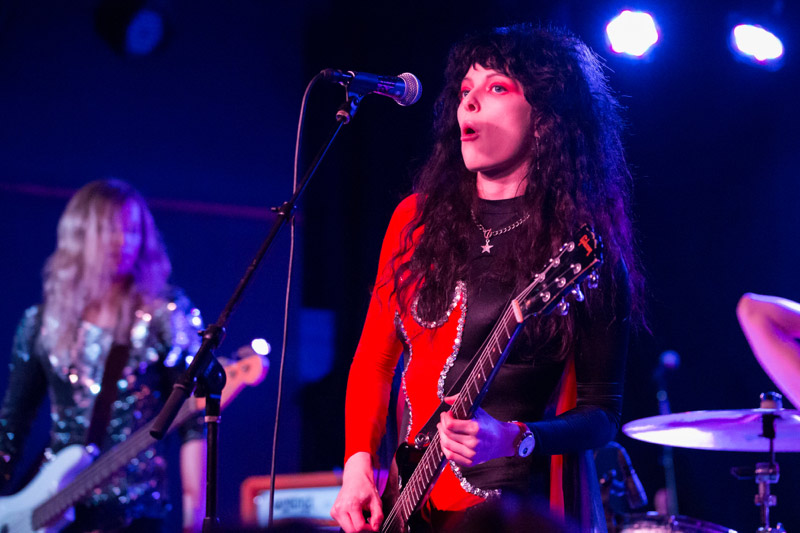 Back to last night, opening the show for Counterfeit was Atlanta-based glam rock band Starbenders.  This incredibly stylish band evokes memories of hair band days and they rock just as hard.  We happened to catch them just after they released their latest single “Holy Mother“.  Power rock is alive and well with this band.  Just as lead singer Kimi Shelter has you mesmerized with a dreamy vocal, the song kicks you in the head with a killer guitar riff, banging bass, and insanity on the drums!  Bassist Aaron Lecesne was head-banging so hard that I was shocked he didn’t get a concussion!! I can’t even imagine being able to play bass while doing that!  Talented guitarist Kriss Tokaji and drummer Emily Moon round out this amazing band that’s sure to be making moves.  They definitely gained a lot of new fans during this show. 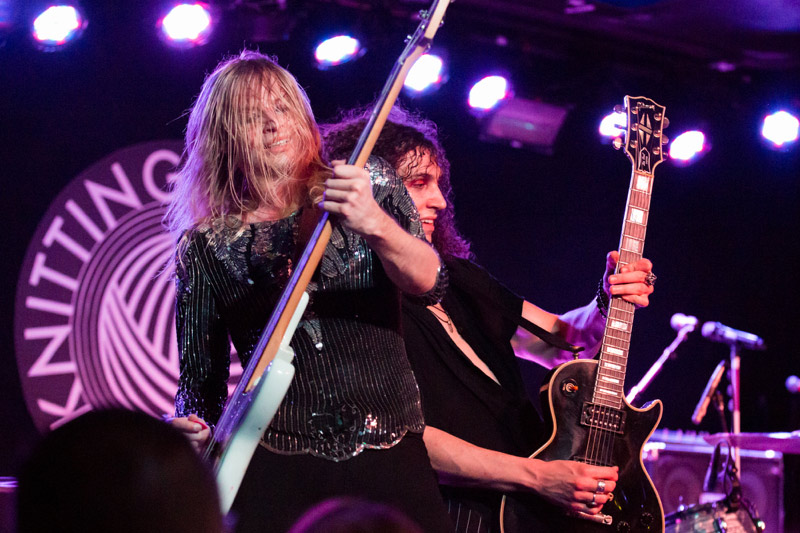 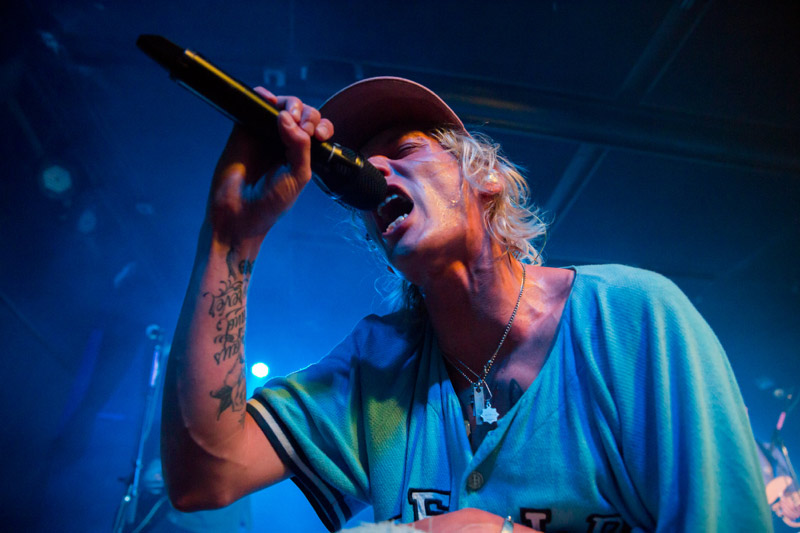 As expected, Counterfeit hit the stage to screams from their adoring fans.  They played quite of bit of new music including “It Gets Better”, whose lyrics had already been memorized by the crowd.  Jamie Bower, the consummate stage performer, came down into the crowd several times to the overwhelming gratification of the fans.  He did speak often about dealing with depression and anger and looking for the positive.  Working quickly through their set, the band left the crowd happy and sweaty.

Catch Counterfeit when they hit your area.  You won’t be disappointed.  And grab their first studio album while you’re at it! 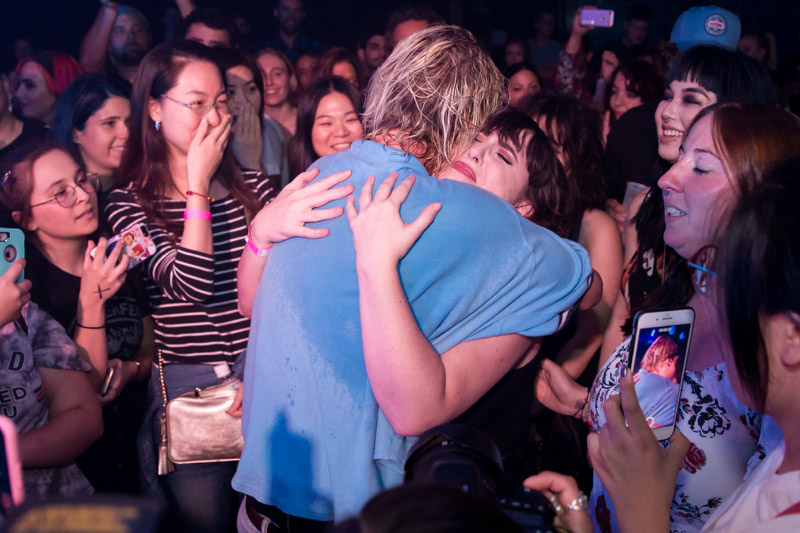