Back in New York, Dylan Rau of Bear Hands talked with QRO.... 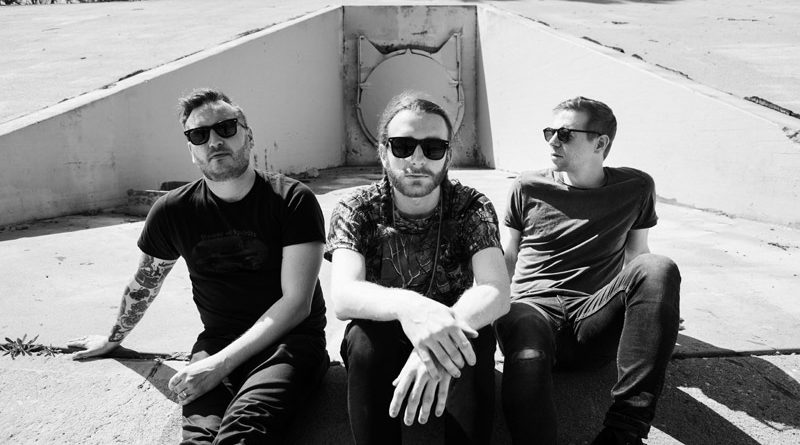 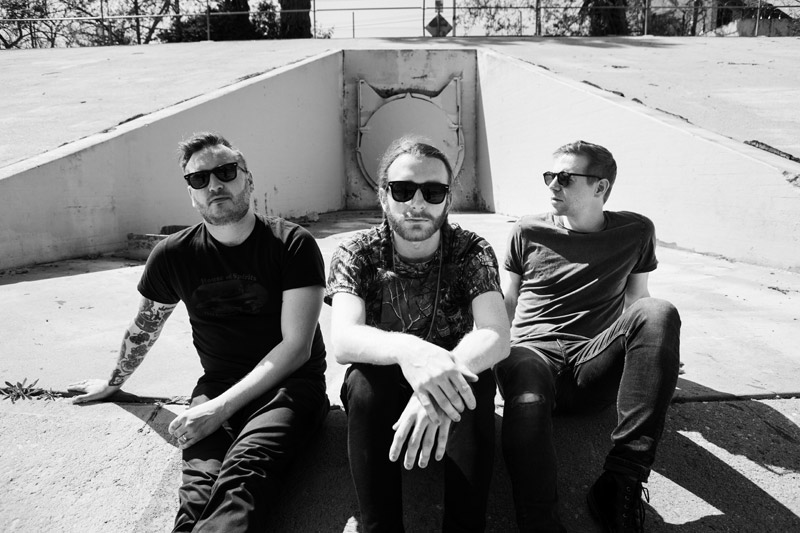 Back in New York, Dylan Rau of Bear Hands talked with QRO. Just before playing a headline gig at Mercury Lounge (and just after drummer TJ Orscher got engaged!) while on tour with Twenty One Pilots, the singer/guitarist talked about their extensive touring this year (from Mercury to Barclays Center), new record Fake Tunes (QRO review), losing & gaining band members, moving to California to clean up, being back in New York, and more…

Dylan Rau: It’s been a crazy, hectic day. We played Syracuse last night, and then TJ got up at like three in the morning and flew back to the city, to surprise his girlfriend – now fiancé – with some Central Park proposal thing.

QRO: How has this tour with Twenty One Pilots been?

DR: The tour has been cool. The shows are huge, obviously. It can be hard, kind of, to connect with 10,000 people – probably harder than like 1,000 people. But it’s great exposure, obviously, they’re nice dudes, and we’re feeling the love out there. So I think it’s good.

DR: It’s funny to play Mercury Lounge (QRO venue review) one night, and Barclays the next…

DR: We’re New Yorkers. I was a New Yorker for a decade-plus, and just moved to the West Coast, but Val & TJ are still here. To play an arena in your hometown…

QRO: Are there cities on this tour that you’ve never been to before, like Grand Rapids or Winnipeg?

DR: Yeah, the Canadian cities, we’ve never been to.

QRO: There was a Canadian run…

DR: Oh, my god, the tour started with ten Canadian shows! I’d never been to Edmonton, we’ve never been to Calgary, we had never been to Winnipeg. We did the whole central Canada thing. It’s kind of beautiful. It’s really empty.

We stayed in Banff National Park. It has steep mountains, and beautiful scenery.

QRO: And before this tour was ones with Foals and Walk the Moon – have you just been on the road this whole year?

DR: Yeah, this year has been heavy, and is going to be heavy, still.

We did a month with Walk the Moon, two weeks with Foals. This Twenty One Pilots tour is seven weeks long. The Canada thing added a lot of dates.

It’s gonna be really heavy, but we put out a new record, obviously Fake Tunes, so we’re happy to do it. Excited to do it.

QRO: Are you going to do your own tour at some point, or do you need to get home & rest?

QRO: Do you mean next year?

DR: We kinda have a tour booked for the fall, another support tour that I can’t announce yet, I guess. We’re gonna do another six week tour opening for somebody in the fall, and maybe February, do a headline tour.

QRO: How was making Fake Tunes?

DR: It was a trip. Ted [Feldman, guitarist] quit the band, obviously, so that was wacky and unexpected, and required me to take on more of the songwriting load, obviously. But that’s the way it used to be, so it was invigorating to go back to it.

I don’t love all of the songs equally. I love some of them really deeply, and some of them I love – know what I mean? I love them kind of ambivalently…

QRO: [laughs] Any record, you’re not gonna have…

DR: You have favorites.

QRO: With any record, for anybody, they’re gonna have some songs they love more than others.

DR: It’s weird, because sometimes people will pick out their favorite, or tell you that, and it’s your least favorite. “It’s cool – I’m happy you love it.”

QRO: It’s definitely weird when someone likes your music more than maybe you do. It especially happens with old stuff…

DR: We have been getting a lot of requests.

We’re playing Mercury Lounge, it’s their twenty-fifth anniversary. Val [Lopez, bass] told me we played there, this would be our tenth time, which is crazy. It’s like a nostalgic trip.

It can be hard, kind of, to connect with 10,000 people – probably harder than like 1,000 people. But it’s great exposure, obviously, they’re nice dudes, and we’re feeling the love out there.

QRO: You did this album out in California – was this the first time that you’d made a record outside of New York?

DR: On You’ll Pay For This (QRO review), Ted & I had a California writing trip. We did most of the work in New York & stuff, but we went to California for two weeks, stayed in this cabin near Big Bear, and wrote stuff.

But this is the first time the whole record was born & bred out of L.A. That’s the only place it was created in.

QRO: How did you get in touch with producer Christopher Chu (Morning Benders, POP ETC)?

DR: We have the same management.

QRO: How did you get Ursula Rose to contribute to Fake Tunes?

I just brought home some instrumental beats, after we were having dinner. Was like, “Hey, I’m kind of stuck on this thing, try to help me come up with something.”

She has really good taste in music, and I knew that she was a creative person, but she had never really written music before. But I was convinced that she could do it. 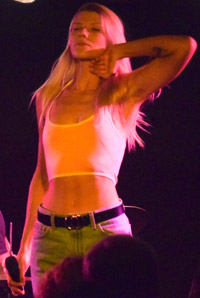 QRO: How was breaking it to the other guys? [laughs} “Hey…”

DR: Both of those things have been mentioned extensively, since Ursula’s been in the band.

QRO: Those are tropes.

DR: The tropes of ‘womanhood in music,’ it’s not fair.

I’m so happy to have her, and she’s such a quality and worthy partner in so many ways.

QRO: Is it just a coincidence that her songs are first & last on the album?

DR: We kind of put it like that, we thought it would be cool to have bookends, so it’s not too out of left field.

QRO: What do you do for her vocal parts on tour?

DR: Well, she’s with us tonight, and she’s gonna go on a little over weeks of the Twenty One Pilots tour with us, gonna play Barclays with us. So fun to be able to do that with her.

When she’s not there, we just use a vocal sampler.

QRO: And, while I normally don’t ask about names, why did you name your collection of songs “Fake Tunes”?

DR: ‘Cause we’re living in a fake reality right now…

DR: Things are a faker out in L.A., maybe a little bit, than New York, at least, I would say.

But I also, just, I hope everything’s fake.

QRO: You have had other kind of ‘negative sounding’ album titles, You’ll Pay For This, Distraction (QRO review)…

QRO: And speaking of names, I have to ask what happened to my fellow Ted, Ted Feldman?

DR: Ted and I are still, I would say, close friends. I’ve hung out with him a bunches of times in L.A.

In some ways, I would say, it improved our relationship. The band is a business, and it can get hectic, and you can disagree about things. Whereas now, when we hang out, it’s just like, “What’s going on?” Just sharing our life with each other, joking around and stuff. We don’t have to make decisions together, or look at each other like our lives depend on each other, which is just a heavy thing. 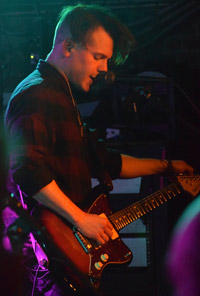 QRO: Did you worry about that when you brought in Ursula?

DR: I did worry about that a little bit, honestly. It can be complicated. But it’s been great so far.

QRO: Do you have someone else on guitar on the tour?

DR: Yeah, Alex Marans, is another Connecticut boy who’s been living in New York for a long time. He was playing bass for Atlas Genius when we were on tour with them. So we met him through that, and he was available, so he’s played every gig since Ted left.

QRO: Between Ted and California, not to mention TJ just getting engaged, does Fake Tunes feel like a ‘this band has changed’ record?

DR: Yeah, it definitely does, to me. Or my life has changed, so it’s inevitable that the band would change.

QRO: You moved out of New York, to California to deal with drug issues – how was that?

DR: Well, just like the song [“Clean Up California”] says, it helps, but it doesn’t solve it. It was a really good running start, it what I always say, I guess.

I can say that I more clean from my drug addiction today than I was yesterday, than I was the day before that. So that’s good. I’m feeling happy & healthy about that.

I needed, definitely, to flee the scene in New York. It had gotten really dark & scary.

QRO: I’ve always thought that there are too many songs about the party, and not enough about what all that partying does…

QRO: How is it, being back in New York? I don’t mean specifically about that…

DR: When I went to the basement of Mercury Lounge, it was a weird wave of nostalgia. I definitely had wild, out-of-control nights there, like in 2009, those years.

But also, it’s just really fun to be back. 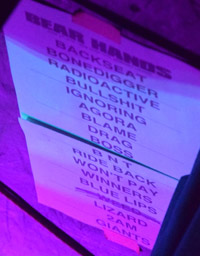 QRO: What is the set list like on these opening tours? I’m assuming mostly Fake Tunes, but do you still at least fit in some older singles like “2AM” (QRO review) or “Giants” (QRO review)?

QRO: I remember seeing you at noon at Lollapalooza in 2014 (QRO recap), and at first it seemed like there was nobody there to see you, but by the time you ended with “Giants”, there were a ton, and they were really into that song (women especially…).

DR: I remember that show, that was fun, definitely.

QRO: What about really old songs, like from your first EP, Golden? If there was ever a night to do so, it would be this night…

It’s not like I don’t like those songs – we’re just not prepared to do them. We have a new guitar player – if Teddy was here, it’d be different, ‘cause he obviously knows them, and has played them a million times.

But every song that we do, we have to teach him.

QRO: You have toured with not just a lot of different acts, but of different styles/genres, from the more electronic like Pilots to hip-hop like GZA to indie-rock artists like We Were Promised Jetpacks. Does that come from being such a ‘hard to genre’ band?

DR: Yeah, they do, and I feel lucky to be able to have toured with a widely diverse crew of bands & artists.

But I think it also has made it harder for people to latch onto us, you know?

QRO: As a music writer, I want to put everyone in a genre…

DR: It’s easier. You have a cohesive aesthetic. ‘This band looks like this, and sounds like this…’

QRO: You just debuted the video for “Clean Up California” – was that Dylan on the skateboard, of did you hire a professional skateboarder?

QRO: Is that all one shot?

DR: It’s all one shot. It’s a really long hill.

It probably takes one-and-a-half minutes to do, of actual time, to bomb the hill, and then we slowed it down.

QRO: How was making the video for “Blue Lips”? I suppose it was easy on your end…

DR: We just did one day shoot in my apartment, in front of a white screen, basically, and then he did everything else on his own, which was great.

QRO: I thought that the ‘screen dumped places’ worked with the concept of Fake Tunes.

QRO: Was that your cat?

But, obviously, we’re separated by 3,000 miles right now, so it’s harder to get together. But they’ll be in videos in the future.

QRO: There’s room for a cat…