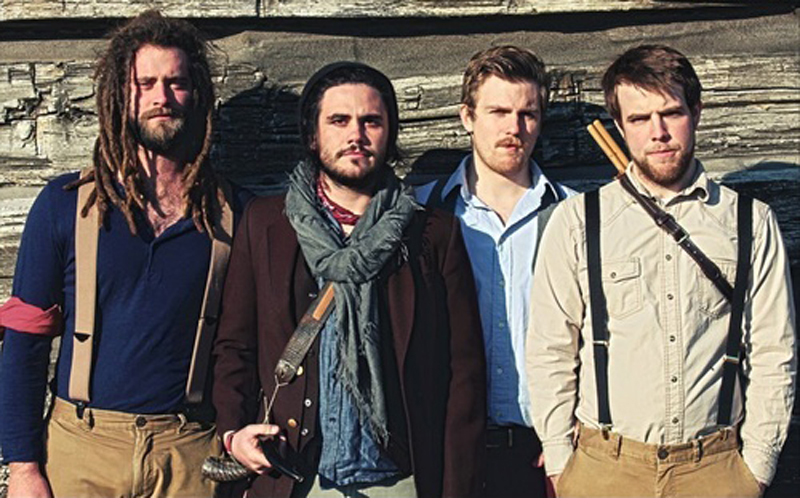 QRO: I read that your guys’ music is inspired by things that you see, and it’s very visual. What are some of your favorite places to get inspiration?

Drew Murfin: I definitely think traveling, touring, and all of the nature type things we get to see. We get to climb cliffs in Maine and go to mountain ranges in New York. We actually wrote songs in some of those places, but nature is a big part of it.

QRO: Do you guys have a favorite area?

Zach Taylor: Everything in between.

QRO: How do you go about translating the scenery and things into your songs? Do you do it vocally? Or do you incorporate the sounds?

WB: As far as the song, if we’re thinking about the rainforest, we don’t throw in the sound of birds, but it’s almost like writing the emotional soundtrack behind a story or something that’s in a certain scenario. It’s more about being awestruck by those things, or just feeling like everything is just surreal.

It’s like you’re at the Grand Canyon just looking at it saying, “This isn’t even real.” I’m right in front of it and it just doesn’t look real, and it’s just awe inspiring. I think that’s what we’re trying to capture in a lot of our songs. Maybe somebody won’t think of the mountains necessarily, but maybe they’ll get that same feeling we got when we were there. Something like that, if that makes sense.

As far as the song, if we’re thinking about the rainforest, we don’t throw in the sound of birds, but it’s almost like writing the emotional soundtrack behind a story or something that’s in a certain scenario.

QRO: And how did you guys meet and form the band?

WB: Drew and I met playing basketball in high school and we didn’t get a lot of playing time. So we started playing a lot of guitar. We were super bitter about it– no, no, just kidding. I was actually homeschooled, and so I met Andrew because we were homeschooled in the same cooperative together. Zach and Drew knew each other through church and childhood stuff. We found out we all played instruments. Zach and Andrew didn’t even play the instruments they play in the band now. It was like we were friends. We wanted to do music, so they learned drums, bass, and upright bass.

QRO: What projects do you have going on in the near future?

DM: We’re about to release our new full-length. It’s been a few years since our last. That’s coming out September 16th. We have some touring we’re gonna do after that and we have some new ideas for some new music. Maybe just some instrumental things.

QRO: What are some of your favorite places to play music? Do you like big festivals or you like more intimate venues?

WB: They’re all different. One of our– or my favorite things to do is playing in living rooms. We’ve done a few shows recently with no mics, no monitors, no sound systems – just pure raw music. It’s like playing from your vulnerable place, and it’s a lot of fun. A couple weeks ago we were in Nashville at this really high-end venue, with all the bells and whistles; you know, a $2000 microphone and stuff. That’s a lot of fun, too, because we can sound our fullest. I think they all come with struggles and they all come with benefits.

ZT: I think they’re all different energies. You know there’s two sides; you play in a living room for not that many people, you can get a certain feeling from it, and then go play some huge festival show and it’s just a totally different feeling you get.

QRO: Do you guys have a chance to play in a lot of living rooms?

WB: It just kind of depends. If we have friends in a city where it’s kind of a new market for us, it’s just a great way to meet new people and other musicians. Just to go to somebody’s house and play your instruments, and just kind of jam. It’s an awesome way to build new friendships. You know you can play at a festival and have twenty people buy your CD, or you can play at a house with twenty people and have twenty people buy your CD. It’s just that level of intimacy is really special. People remember that and we remember that. We hold on to those kinds of things, but then there’s nothing like playing in front of a thousand people.

QRO: Have you guys been able to catch any other acts here at the festival?

QRO: What have been some of the favorite acts at FMMF?

AB: Switchfoot (QRO photos at FMMF) is always good. We saw them last night, so that was a lot of fun. Abandon Kansas are friends of ours. Their shows are always fun. It’s been really impressive how many of these bands are really good. You can go to any stage at any time and someone really good is playing.

QRO: I loved your videos. Who works with you on them?

WB: It’s these two guys here [points to Zack and Andrew] that did our two most prominent videos. Andrew directed “Beautiful Dream” and Zach did “Clouds Catch Fire”, which is a one take. Typically it’s just friends or ourselves, but recently we worked with a guy named David Nobles from Atlanta on our video for our song “Hypnotize”, and that should be coming out in a couple weeks. So, we’re excited. It was really good to work with him and that’s the first time we really hired out.

QRO: If you can tour with any band, which bands would you choose?

DM: I still think Florence & The Machine would be absolutely amazing. You know, the problem is they are always going to be better than you so it’s just what band you want free tickets to. [everyone laughs]

QRO: Well, we look forward to seeing your show tonight!