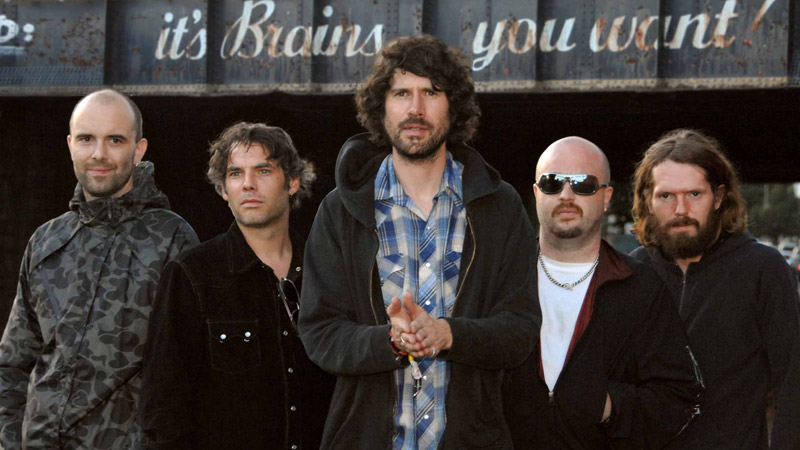 Just before their first North American show in five years, at New York’s 4 Knots Fest (QRO recap), Huw Bunford of Super Furry Animals sat down with QRO. In the conversation, the guitarist talked about being back in New York, back on the road, the re-release of their Welsh language record Mwng, relearning songs via YouTube, going over the top, under skyscrapers, next to war machines, and more…

QRO: How’s it being back in New York?

Huw Bunford: Kinda weird, you know? Not being here for such a long time. We used to come back quite a lot, years ago, and then not coming back for a while, and then suddenly… There are a lot of memories for us.

QRO: How’s it being back, just in general, after the band’s five-year hiatus?

HB: It’s not much of a shock, really. Not as in ‘body shock’, when we did a short tour. That was to get back on the road for almost two weeks, pacing ourselves, learning not to overdo it.

QRO: This is your first show outside of Europe…

HB: We did a Spanish run last weekend. That was the first thing outside of Britain. We did Glastonbury.

QRO: How was Glastonbury?

QRO: Are you working on a new record?

QRO: You recently reissued Mwng – have you been playing any of it live?

HB: Yeah, [we] do one [“Pan Ddaw’r Wawr”]. When we did the short tour in May, it was the first time we played for six years, and it was coinciding with the Mwng re-release. So we did about two-and-a-quarter-hour sets [laughs] – it was quite epic. A little bit more Welsh songs off Mwng, you could play more. We’re now down to the festival – ‘festival ready’…

QRO: Do you find doing a song in Welsh is received differently in non-English speaking countries like Spain? No one in America, for instance, is expecting a song not in their language…

HB: You could argue that it’s not so much of a hang-up, maybe, in other countries. I think America is probably quite open – there’s so much cultural… I’m sure there are fans who’ve got Spanish as their first language, or French, or German, or whatever.

I think most people saw maybe something kind of different, which they couldn’t understand.

QRO: How difficult is it to make a set list these days, with such a long discography?

HB: Now we’ve got it down. When we first started – we actually rehearsed for three weeks, which is the longest we’ve ever, ever rehearsed as a band; we’ve never rehearsed that long. And that was great, because we really managed to work out a nice little set – albeit two-and-a-quarter-hours long. So there was a lot of ‘indulgences’ that’s not here now…

We’ve done it now. We’re happy now. You get a kaleidoscope.

QRO: Are there songs that you didn’t remember how to play?

There’s not one single song that isn’t up on YouTube. Apart from “Patience”, which we wanted to do, because I don’t think it was even released. It’s on an extra track on an American DVD release (Rings Around the World).

QRO: Has anyone ever requested a song and you don’t know the piece?

HB: We used to do a bingo thing, where we’d have a bingo wheel-thing, and whatever it landed on, we had to play it. And sometimes, it was just like [breath intake]…

There’s not one single song that isn’t up on YouTube.

QRO: As you’ve been around for over twenty years now, do Welsh bands ask for advice from you?

QRO: You are specifically associated with Wales, since you’ve done Welsh songs…

HB: Maybe. I was surprised how weird Mwng managed to make us a little bit more… not so much ‘more’ Welsh…

QRO: Maybe you didn’t feel any more Welsh, but other people did [about you]…

QRO: Super Furry Animals started over two decades ago – does that ever amaze you, maybe make you feel old?

HB: When we did Glastonbury, some of the acts, we were like, ‘Who the hell are these? I’ve missed this one…’

But some of them I know. I still like listening to new bands. [In the band,] we’ve all got eclectic, interesting stuff going on.

QRO: You’re playing outdoors on the water. Do you do anything differently in situations like this?

HB: It’s quite mad, looking at the fantastic ‘war machine’ [the battleship/museum The Intrepid is docked next door, looming over the Pier 84 – QRO venue review]. And you’re under skyscrapers. So it’s kinda totally different, too, than your kind of normal festival, where it’s always in a field, in England & Europe. It’s basically a field. A stately home, but it’s a field…

QRO: Are there any songs that you’ve been really excited to play again, now that you’re back?

HB: All of them, really. We’ve got them down.

I quite like playing “Receptacle for the Respectable”. I like that, I don’t know… I laugh – if I watch, it just seems a little ridiculously O.T.T. [over-the-top]. It’s got all the elements you need in a festival song.

QRO: You can extend your songs – do you ever have to keep yourself from doing that live, because you’ve only got so much time?

HB: There’s one song off the Mwng album, there’s a version of it on the deluxe reissue that came out in March of this year – on Domino Records – “Gwreiddiau Dwfn”, and it’s a sixty-minute version, jazz…