QRO talked with Jarrod Gorbel of Night Terrors of 1927.... 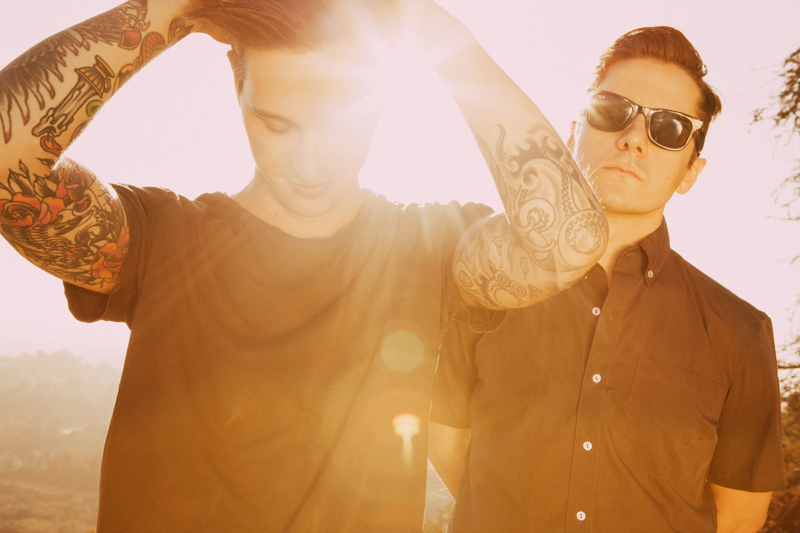 QRO talked with Jarrod Gorbel of Night Terrors of 1927. One-half of the duo with Blake Sennett, Gorbel talked about their debut Everything’s Coming Up Roses (QRO review), including shifting it to the live setting, their indescribable sound, playing at Joshua Tree, their ‘zine Afraid of the Dark, and more…

QRO: One of the best things about Night Terrors of 1927 is that someone could describe your music and it’d differ from someone else’s description. There isn’t one singular way to pinpoint the bands sound. There’s a lot of melding of different sounds and I was curious, what surprises you now when you listen back to these tracks?

Jarrod Gorbel: It was surprising to me hearing the size of these songs. The mere scope of the songs, the massiveness of them just left me stunned. Also, I loved the fact that my voice didn’t really sound like my voice at times. It feels very different in contrast to things that I’ve made in the past. It’s so hard to be subjective and objective about your own music, because when you’re in the making of it you somewhat loose perspective on how people listen to it, so it’s been important to me to distance myself from interpretations.

I’ve also been noticing how age bracket can mean a lot in how people take in your songs, especially on a tour like this [the Bleachers tour]. They’re some kids who have come to the shows with their parents and the contrast has been having these parents who hear Echo & The Bunnymen or The Cure, but then the kids will hear something like The Killers or something like that, so that’s been quite an interesting thing to take in.

QRO: I remember reading how you felt a bit of nervousness towards being a new band and the aspect of proving yourself to a crowd. I actually really admired that you openly said that because I feel that a lot of newer bands tend to hide that they feel that way at times. Now that you guys have some shows under your belts how do you feel about that now?

JG: It’s still a developing thing. We’re constantly trying to grab people’s attention, and from my perspective I’m used to being a guitarist that’s stationary on stage. But with this band I’m the singer and have to move around and keep the crowd engaged. So there’s been a bit of getting used to that, and that’s been frightening in many aspects. Just to physically act in a different way because you’re kind of exaggerating the emotions of your songs but also just showcasing them the way you want.

QRO: Do you feel that the album has translated well into a live setting now that you’ve been playing it live?

JG: Yeah for sure. I had to figure out how to bring the electronic sounds to a live setting, which was very new to me. The aspect of sampling and making the show dynamic with all that, but at it’s core this is still a rock band and I’ve loved the fact that that can still show through all of this.

QRO: And when it comes to the album, Everything’s Coming Up Roses, I love the fact that it’s eclectic yet still feels cohesive. You can vividly hear a palette of a sonic landscape that’s very specific to the band. Was that intentional or a bit of an accident?

JG: I think some of it was an accident and some of it was intentional. I think at times we’d go into a song and think, ‘We need to try something different with this particular song,’ especially since we had various different producers on this project. When you do that, you always want to experiment and get the best out of people, and with this album it took nearly a whole year to complete. It all became a task in figuring out how to match what we wanted to do lyrically and musically.

QRO: Wow, so with there being various producers that must mean all the songs must have different versions?

JG: Yep, and they’re also many songs that didn’t even make the album. But yeah all the songs have various stages where they were different, completely different. Blake has his own studio and a lot of songs would go through different trials while Blake would mess around with stuff. It was great to have so many options to delve into.

QRO: Which one of the songs on the album did you find inspiration to write from an unexpected place?

JG: Mmm… that’s a good question. I guess the song “It Would Be an Honor” fits that well, that song was a very spontaneous song for us to make. It was just me and Blake jamming in the studio after experimenting with it in the studio beforehand.

Night Terrors of 1927 playing “Running In Place” at Joshua Tree:

QRO: I saw the video you guys did for “Running In Place” at Joshua Tree, and that was a very fitting tone for that song. What was it like making that and have you performed at Joshua Tree before?

JG: Nope, I had never performed there before. It was the idea of the people who were filming us and what I loved about it was that the cameras they had were able to use just the moonlight to illuminate the area, and that just blew me away. It made the performance feel a lot more contained, despite the fact the area we were in was a big open place. “Running In Place” is also one of the songs we have that’s much more about the songwriting rather than the production.

QRO: Lastly, I saw that you guys were making ‘zines recently titled Afraid of The Dark. You don’t really see people doing that so much anymore; what inspired you guys to make ‘zines and how did those come together?

JG: I guess we were just always brainstorming on things to do that could be different, having ways to intrigue fans that we’ve made. We really wanted to find a way to make people feel a part of us and what we’re doing. I love art, especially graffiti art and comic book art. We all kind of doodle (us in the band) so we thought it’d be cool to reach out to our fans and go, ‘Hey, make something for us to showcase in the ‘zine.’ Some of the fans were even people that I followed on Tumblr. It was also great to do it because it made me and Blake get a bit more creative. We both wrote poetry and drew little bits for it, so yeah it was just really great having an excuse to be creative. [laughs]