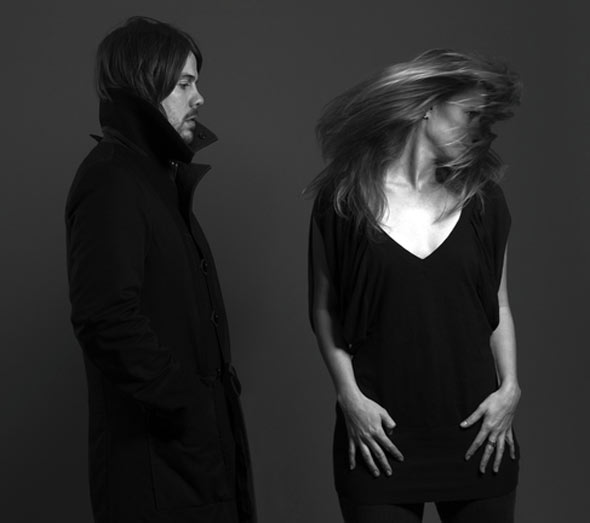 Chicago-based band L’Altra is back from their six-year hiatus of finding themselves, their sound, and each other in music once again.  With their new album Telepathic, Lindsay Anderson and Joseph Desler Costa bring you tracks full of piano, soft drums, acoustic guitars and a bit of laid-back country.  This is a band that truly cares about connecting with their fans on a different kind of level with their music.  They might be an underground band but they are touring everywhere this year, from festivals in Spain to maybe even China.  L’Altra are doing everything this time around but slowing down, they have been away far too long and are back to please our ears once again.

QRO: So you guys live in Brooklyn now?

QRO: What made you move to Brooklyn?

JDC: I’m an artist-photographer/video maker and I just have some opportunities here, so for that kind of thing New York is a really good place to live, but I go back to Chicago all of the time.

QRO: Does the rest of the band live in Brooklyn?

JDC: No, the drummer lives in Chicago too, but I’m always back in Chicago.  I have friends that I always stay with so we are kind of from here and there, which is kind of cool to be from both places.

QRO: Being from Chicago, would you guys ever be interested in playing at Lollapalooza?

JDC: I would love to play yeah that would be amazing; I mean it’s more about getting invited right? [laughs]

I’ve never been but I heard it’s really cool.  I’ve been to Pitchfork (QRO festival recap) a bunch of times that’s a nice festival too.  We would love to play any of those big festivals in Chicago; it would be great having people that wouldn’t normally hear us get a chance to hear us.  So we’ll see what happens, we’ll see.

QRO: Why were you guys away for so long?

JDC: Our last album came out six years ago, so we kind of stopped working together for a while.  The project was basically me and Lindsey, and then we just had a bunch of different collaborations, and we did some touring after our album, and it just wasn’t working.  Then we took some time off, I made a solo record and she made a solo record, so last year we started writing songs together and we just really wanted to work together again.

So it’s kind of like the time apart made us appreciate what the other person can bring to the table.

QRO: What made you guys name the new album Telepathic?

JDC: It’s a lot of different things, not just one thing in specific, but one thing but with the music that we were writing for this album we wanted it to wash over the person listening, or wash through them like a liquid-y kind of music.  Another funny thing that happened as we were writing songs separately, we came together to put each of our parts in a song and they fit perfectly together.  All of these different things brought us to that title, it was like we took all this time off but writing music together was very natural we didn’t have to think about it.

QRO: How would you describe the new album?

I think the album is that, it’s like inner voice music – if that makes any sense.

QRO: Would you say that as a band, your sound has evolved?

JDC: I think so for sure.  This will be our fourth album; I think we started out as a straightforward indie rock band and then we went into electronic.  Our last album was pretty heavy electronic, and I think this album blends electronic elements with more chamber and rock element.  I also think there is a little bit of country somewhere in the music; it seems like a new thing.  I’ve been listening a lot to Gram Parsons and stuff like that and I think its kind of came out a little bit in my music.  When I say "country," I don’t mean like Billy Ray [laughs] – it just has like a southern draw to it.

QRO: Where will you be touring this year?

JDC: In two weeks we are heading over to Japan then we’re coming back and we’ll be doing South-by-Southwest and dates around there, then we have a date in New York in the spring, and then some dates in Chicago, and hopefully some summer festivals.  We’re doing a festival in Spain called Primavera Sound we are pretty excited for; it’s in Barcelona and then I think we are going to do something on the west coast so hopefully a lot.  We just got invited to China too – I don’t even know how to wrap my head around that.

QRO: Is China a for sure thing?

JDC: If we can find the time to make it happen, yeah.  What’s funny about that is a bunch of people had been telling me that indie bands have been going to China lately and I was like, ‘Really?’  Then we got an email to come do four or five shows there.

QRO: Is there a particular place you guys would be really excited to play?

JDC: I would love to play in a big American music festival like the Hollywood Bowl.  I saw Grizzly Bear at the Hollywood Bowl in Los Angeles (QRO review of that show) and I was just blown away – it’s a beautiful venue.  That would be a dream, or of course Lollapalooza or Pitchfork or something.  Honestly, I think playing in the States is one of things that if you can get in a good venue and on a good festival it could be amazing.

QRO: Have you guys ever had a tough crowd before?

Definitely we’ve had tough crowds, but the other side of that is if you can actually capture people.  Then it can become really beautiful intimate experience between us and the audience if we can work the room – we’re not a super loud rock band that can just blow everybody out you know?

QRO: How do you guys deal with a crowd when they’re not cooperating?

JDC: We just keep doing our thing, most of the time it works, but when it doesn’t work we definitely leave the stage not feeling great [laughs]

We played like four shows for CMJ this year (QRO recap) and one of them we played this strange club in West Village or something, and it was not working. [laughs] The concert hall was in the back but the bar was up front, and in the middle of a song we were getting beer bottles and stuff being thrown – it was just a ruckus.  Of course we just played our set, and we were all bummed out that we didn’t connect with anyone.

QRO: On the other hand, have you had an experience with the audience that’s been the best?

JDC: For sure, that’s the thing that makes it all worth it, I mean if you ask any musician.  It’s moments like that make all the others disappear and all those times carrying your amps up the stairs are stuff that make it worth it when you connect.  Oddly enough, the next night at CMJ we had a show in Brooklyn and it was awesome – you could hear a pin drop; we really connected, so it kind of brought us back.  It was nice because we were really down after the show before. [laughs]

But that’s another thing with the kind of music that we play.  I think over the years we’ve gotten tougher at shaking off a bad performance.  Since we really do try to connect with people that when we do have a performance that doesn’t connect we don’t feel good because when it happens it’s… I don’t want to use the word ‘magic’, it sounds cheesy but it can be, it feels right.

QRO: It’s really nice to hear that you guys genuinely care to connect with your fans.

JDC: Aww, thanks.  I mean but for me that’s what its about as a musician – I go and I play and hope to get something out of it too; it’s like an exchange.

I can’t imagine someone who goes out there and doesn’t try to connect at all; I couldn’t do that every night.

QRO: What’s one of the hardest things you’ve had to go through as a musician?

JDC: I think the hardest thing was after our album that came out in 2005 when we took our break, it was a time for figuring out what I was going to do as an artist and a musician; just kind of feeling a little lost.  I had to find myself without L’Altra; I had to find who I was because I had been doing the band for a while so I felt like, ‘Who am I without this band?’  I think going through that was good because now that the band is back I have a stronger identity as an artist and I feel stronger for having gone through that.  You know when you lose your way, you don’t know what’s going on but when you find it you feel like it was worth it, in a weird way.

QRO: How old were you guys when you started with the band?

JDC: We’re all just thirty and we started ten years ago so we’ve been a band ten years, this year.

QRO: That makes sense now, because don’t people usually go through an identity crises in their mid-twenties?

JDC: Yeah I think so! [laughs]

I don’t know, but that’s exactly when we stopped being able to work together, and also outside of bands, people have lives, and lives get complicated.  It’s just a part of life that sometimes things don’t work, and I feel really lucky that we have this chance to make another record, because it never felt finished to me.

QRO: After so many albums what inspires you guys to keep making music?

JDC: Just expression.  Lindsey and I are artistic people and we need to express ourselves, and we’re fortunate enough to have people that care about it, which is super flattering to us.  I always think, ‘Oh, this is going to be my last record,’ and then I’m already writing more music; it’s just automatic for us.

QRO: What’s in store for the future?

JDC: We have these tours coming up that will last the whole summer.  We also have a seven inch coming out, but I don’t know when – it keeps getting postponed but we have the songs ready, so that will be out probably in the next couple of months – and I think one of the songs in that seven inch is actually one of our best ever.  Then we’re going to have some videos coming out too, also working on new music and playing shows.

QRO: Any artist you would like to collaborate with?

JDC: Yeah, there are so many good bands out right now.  It feels like there was this moment where there wasn’t a lot happening, and now there is just a lot of bands that are doing cool stuff, but I haven’t thought about somebody to work with.  Definitely my next thing want to work with a producer that I really like they’re work.  I like the bass player from Grizzly Bear; he produces records, his production is awesome but especially here in Brooklyn there is just so many bands out they’re right now.  It’s really cool.