Before playing Bowery Ballroom in New York to celebrate the release of their new record, 'Shake the Shudder', !!!’s Nic Offer sat down with QRO.... 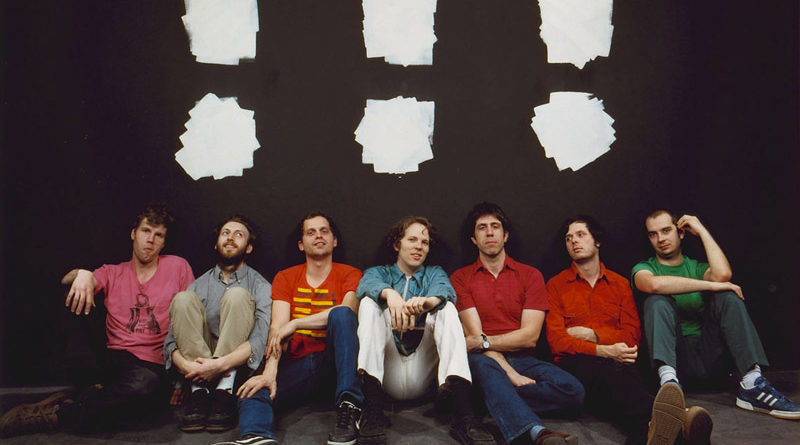 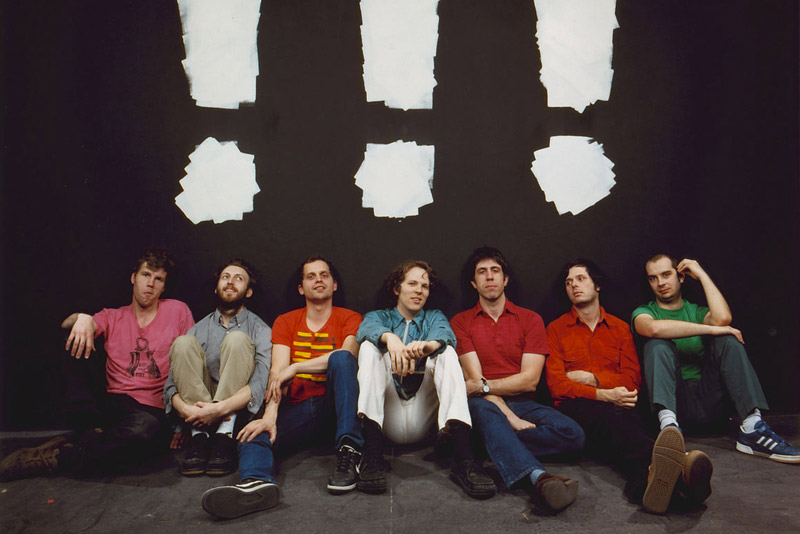 Before playing Bowery Ballroom in New York to celebrate the release of their new record, Shake the Shudder (QRO review), !!!’s Nic Offer sat down with QRO. In the conversation, the singer talked about their tour, making Shake, over-writing, buckling down & having fun, videos, his stage shorts, going to Spain many times, many times (including Bilbao), being mistaken for the guy from Parks & Recreation, and more…

Nic Offer: Good. We really just got started. We did probably two weeks in Europe, and then just did a couple dates in the East Coast so far.

It’s always good to get back out, after a record was just released, got new songs to play and stuff. It’s fun.

QRO: How were the European dates, including Primavera Sound in Barcelona (QRO recap), Spain? You seem to have a pretty strong European presence…

NO: Sometimes it feels like, certainly in Spain. It’s hard to tell.

It goes in waves. We’re bigger here then, or… Right now we’re doing really well in the U.K., and we always do well in Spain.

I’m very critical of us, and I thought we were fantastic on that set.

QRO: I like how, with Primavera Sound, it’s not ‘noon to ten’, but like ‘seven PM to four AM.’ I guess it’s more of a Spanish thing…

NO: It’s more of a Spanish thing…

I walked from my hotel to the show, I was sleeping, I walked there right as Arcade Fire had finished, everybody was leaving, and I was like, “Oh, fuck!” But then, we walked on stage; it was like, “Oh, shit!” It was awesome. So it was great.

QRO: I’ve noticed that “!!!” translates to every language…

I think, especially with the Spanish, they get the ‘free vibe.’ They want to party at four AM, and we like to play at four AM, so it works. It’s good.

QRO: I know that your band originated in Sacramento, but you live in New York now?

NO: I do. For the last sixteen years.

Everybody in the band lives in New York, currently.

QRO: So is this a ‘hometown show’?

NO: Definitely. Both Sacramento and New York feel like hometown shows, in that your friends are there, you don’t want to see your friends yawn.

QRO: You had that line, “How can I live somewhere where the bars close at two?…”

I’ve been at other towns, and the lights come on at like 1:45 AM, and you’re like, “Whoa, what? I’m just getting started here…”

QRO: How was making Shake the Shudder?

It was a fun one. I always think that the better ones are the ones that we’re having fun doing, and this one was definitely a lot of fuckin’ fun.

It was tough; they’re all tough. You’re always gonna hit those hurdles that you have to take, and that’s the challenge of making a good record. You never know what’s going to be the difficult ones…

Like with the last record, with As If (QRO review), with “I Feel So Free”, we were like, “This song is in the bag – we have this.” And then it turned out to be the most difficult song.

So there’s always like some different hurdle. And Shake the Shudder certainly had its hurdles, but it was fun.

QRO: You have such fun albums, when it’s ‘the tough part of making a fun song,’ does it feel like it goes against the spirit at all?

NO: I wouldn’t say that we get caught up in that, necessarily. I think, maybe, there’s been some songs that maybe got ruined.

But we have a pretty good policy of over-writing. We write more songs than we need. ‘Cause you never know what those hard ones are gonna be, when you’re gonna start overworking something. There are certain songs, we’re convinced, ‘This is our best song,’ and it turned out we had to trash it. Having that kind of openness allows so that we don’t have as much pressure.

For instance, on Louden Up Now, those were all the songs we had, you know? So it was a lot of pressure. We had to put songs we weren’t as psyched on. That was not as fun a record, and kind of a difficult record.

So, I think our records got funner when we opened it up more.

I always think that the better [records] are the ones that we’re having fun doing, and this one was definitely a lot of fuckin’ fun.

QRO: Conversely, are there times where you’re having lots of fun, but you have to buckle down and work?

NO: It’s the same thing. Buckling in & working is fun. It really is; it’s what you wanna do. If it’s not fun, you should probably quit making records.

Honestly, I love those sixteen-hour days, where you’re just in the studio at four in the morning, you’re delirious, you’re laughing at everything – and it’s tough, but it’s fun. It’s really good.

QRO: Does it feel any different at this point, making records, this far into this band’s existence?

You get better at making records, so that makes certain things easier. But certainly, with our sound, there’s a pressure to create something we haven’t done before.

QRO: I was wondering about that. I feel like you have a ‘signature sound,’ and it’s like… if you stick too close to it, everyone like, ‘Oh, you’re doing the same thing over again,’ but if you change, they’re like, ‘What? Why did you change? This isn’t what you’re supposed to be doing…’

NO: You face both of those things, for sure.

Those aren’t necessarily the biggest challenges. Maybe that will be the challenge with the next record. I do know, certainly with this one, we felt like we were trying lots of different things, and then there was definitely like… reviews have said, “This is what they do.” It feels like our wild creativeness has hardened into a certain sound, you know?

But I think that’s a fun part of the challenge: expanding the sound.

QRO: How about the video for “The One 2” – did you know anything about the awesome choreography in it beforehand?

NO: We didn’t, honestly. That was just some girls we hired, and they put it together. We were like, “This is fantastic – let’s go with this…”

I was in the “Dancing Is the Best Revenge” video. I’m not sure if we’re doing any other videos.

QRO: I loved the video for “Every Little Bit Counts” from the past record. That was with the Too Many Cooks guy [Casper Kelly]. How was making that?

NO: Great! That was one of my favorite video experiences. That guy was great. Really chill vibe on the set, really group effort – everyone just like, “Hey, what about this?” It felt very free & open. He’s got a great crew. I thought he had really good ideas.

It’s rare that we read a video treatment that we like. With his, it was like, “This is cool…” And he’s talented & funny. I really liked working with him.

QRO: I figure that this tour is more focused on Shake the Shudder. How hard is it to pick which songs from the new album to do live?

We’re reaching the point now where we have all these songs that people care about and want to hear. ‘Okay, shit…’ It’s hard to fit everything in the set that we wanna play. You kinda feel like you should give people one song from each record, at least, or something like that.

You kinda know when you’re working on them, which ones are gonna work live. And there’s different variables about what actually does end up working live.

QRO: What about songs from prior albums/tours – your set time probably hasn’t gotten much longer since your last album tour, so you have to cut down…

We certainly have enough records that we could play a Bruce Springsteen-like three-hour set, but that wouldn’t be effective. It wouldn’t work.

NO: Yeah, definitely. So I don’t know.

QRO: With so many albums under your belt, how do you balance them all on the set list? Do you just do at least one from each album, like you said? Is it always the same one?

QRO: For performances, do you always wear your shorts?

NO: Yeah, pretty much.

QRO: Have you ever played somewhere that you realized it was really too cold to be in shorts?

NO: Nah. I mean, we’ve played New Year’s Eve in Salt Lake City – it was seventeen degrees, and it was snowing as we played.

QRO: This was outdoors?

NO: This was outdoors.

There’s no show too cold.

It’s like riding a bike in the winter. It’s only cold for the first minute.

QRO: I would imagine that it would be cold when you step on, but then you start moving…

NO: Then you start moving, and you’re fine.

QRO: I would think that you gotta stay in shape to wear the shorts…

NO: I do watch the cookies a bit. I have to be careful.

I actually get to eat more junk food when I’m touring, because I’m physical every night.

QRO: What is it like, watching people move to your music, even right from the first notes? I find I can’t help but turn into a mini Nic Offer when I listen to you guys…

It’s funny, because you hope when you make the music, you’re making something for the world, and you want everyone to dig it. You think everyone’s gonna like it as much as you do.

That was kind of the joke in there. Especially for Spain, because Spain knows we’ve been there. They love us.

QRO: Have you ever been confused for Nic Offerman?…

NO: Definitely. That has come up a number of times.

People have been disappointed. They’ve seen on a list, and been like, “Aw, I thought you were gonna be Nick Offerman…” Sorry, it’s just Nic Offer. It’s an F-list celebrity instead of a B-list celebrity.

QRO: You reference being places a lot. Does that come from touring, traveling is on your mind a lot?

It’s funny – I don’t know any other songs about Bilbao, so it’s kinda like funny to throw it in there.

It’s kinda like a trick of lyricism that I always kinda thought was fun.

QRO: After shows, do you get sore the next day? Especially when you’re just starting a tour?

NO: I have to stretch before & after. I’m a bit older, so it’s not as easy to do this. I’m really pushing my body as far as it will go. I have to do that, for sure.

QRO: In the studio, do you have tamp down your desire to dance?

NO: No, it’s fine, it’s cool. We get away with it. You wanna be dancing a little.

It’s a lotta hours sitting in a chair, listening to the same groove.

QRO: Have you ever knocked stuff over at concerts?

QRO: Are the other guys in the band jealous that they can’t dance as much, because they’ve got all this equipment, and you “Feel So Free”…

NO: I think they’re fine. I don’t think they want to deal with that.

They’re not such exhibitionists…