<img src="https://www.qromag.com/wp-content/uploads/2010/06/thelovelanguageinterview.jpg" alt=" " />At the end of their short tour with Camera Obscura, The Love Language sat down with QRO. ...

At the end of their short tour with Camera Obscura, The Love Language sat down with QRO.  Over lunch, singer/songwriter Stuart McLamb, singer/keyboardist Missy Thangs and guitarist/producer B.J. Burton talked about the past opening dates & upcoming headlining dates, next month’s Libraries (QRO review), being on local label-made-big Merge Records, wanting to play your house, who’s the loverboy of the band, firing people for not skinny-dipping and more…

QRO: How has this run of dates with Camera Obscura (QRO live review) been?

Stuart McLamb: It’s been great.  It’s been short – just four dates we did.  Asheville, Cincinnati – a one-off in Cincinnati – and Richmond, Virginia.  But we got a chance to hang out – really sweet people, down to earth.

QRO: How did the dates come about?

Missy Thangs: We met them a while, too.  We’re secretly hoping that’s why they asked us… [laughs]

SM: We did meet them when they played Cat’s Cradle in Carrboro.  It was very brief – I wonder if they even remember us.  We wondered if that could have been a factor.

QRO: But you’re also going to be doing some headlining dates of your own next month.  How do they compare, opening in bigger places vs. headlining smaller ones?

SM: As an opportunist, I’d like to play bigger venues, but I think we have more fun in small, tiny places.  So we’ll headlining [those] – ‘cause we’re not that big a deal… yet [laughs]

QRO: But up next is Taste of Randolph Street Festival in Chicago [on Saturday, June 20th – QRO Festival Guide].

SM: Speaking of tiny venues, we could not land a single show on the way up there.  It’s a long drive up there for that show, so we’re trying to book a house show, in between Raleigh, North Carolina, and Randolph, Chicago…

QRO: What cities are there between Raleigh & Chicago?

We want to play your house!

QRO: Do you have to do things differently when you play outdoors?

SM: Not as far as we dial in our settings and stuff, but outdoor shows, in the daytime, have a different vibe.  Might be more calm.

QRO: That festival is headlined by Merge Records founder Superchunk (QRO live review) – have things sort of opened up for you since signing to the label?

SM: I would say yes & no, just because the album hasn’t come out yet, but I think that we’ll see a lot of things once the record is released.  But even something like this Camera Obscura tour, there could be a correlation with them being on Merge.

QRO: I think they were on Merge…

SM: They were – now they’re on 4AD.  But Merge, you couldn’t pay me a billion dollars to go to another label.  They’re awesome.

QRO: Being a Raleigh act, what’s it like getting signed to the ‘local’ label that’s also huge (Arcade Fire, Spoon, She & Him)?

I was thinking about it.  It’s interesting how everything’s centralized in this little oasis in the southeast that’s not Atlanta.  This little triangle… 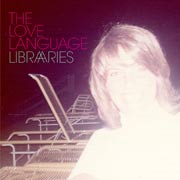 SM: One story that’s great about them being real close: the artwork for the new record is comprised of a lot of family photos my parents had, a family album kind of thing.  Maggie Fost, the art director at Merge, she needed some updated scans – we were on tour when I told her about this idea, and she was like, “Yeah, I could work on that.  I just need the photos, to scan them in.”

So I called my mom, and my mom drove thirty minutes to the Merge office, and walked in & met everybody.  So it’s a tight-knit, family vibe…

QRO: For bands in Raleigh, does everyone want to sign to Merge?

SM: It’s something on everybody’s radar – well, not ‘everybody’, but it’s important to a lot of people.

QRO: How well do people in Raleigh know Merge, know how big it is, outside of Raleigh?

But on a general level, the sort of people that follow that kind of stuff, yeah, I think they’re definitely aware of Merge, of…  Yeah, they’re a big deal.

QRO: Were you signed to Merge before making Libraries?

SM: I think we officially made the deal with them around last summer, and we made Libraries in January, February of this year.

QRO: How did making Libraries compare to making your self-titled debut?

SM: The first record was not so much an album; it wasn’t a predetermined or premeditated record.  It was more or less like a pile of songs that just stacked up.

What’s that quote, “You have your whole life to make your first record, and then you have six months to make your second”?  It was kind of like that.

I think the first record was made over the course of a year and a half, roughly, just taking my time, songs piled up, I’d record them shortly after I wrote them.  And I recorded them mostly on my own, my own engineer, on a little eight-track.

And then Libraries was done in a month-and-a-half, banged it out really quick, in a proper studio.  But both were great in their own right.

QRO: Did you have the band when you made Libraries?

SM: No.  I used Missy and Jordan on some tracks here and there, and had some guest musicians, but it wasn’t made properly with ‘the band’.

QRO: A lot of bands take a long time to make their sophomore record – how were you able to put it out the year after your debut?

SM: I had a few songs written after the first record was released, and then had a good summer in Carrboro caught some songs.  Get ‘em done.

And B.J. fuckin’ put some pressure on me to make a record, instead of sitting around.

QRO: How did you meet your current line-up?

SM: Missy, and Jordan, who’s my brother, they were in the last line-up of the band.  Jordan did drums, Missy a dual keyboard thing.

B.J. here produced & engineered the record.  And then I think the pressure of South-by-Southwest (QRO recap), I looked at him and was like, “Dude, am I crazy, but we’ve been making music here for the past two months – do you want to play guitar at SXSW?”

BU: It was just going to be at South-by…

And Justin Rodermond on bass, and that’s our current line-up.

QRO: At the show last night, there were two really young girls on his side of the stage squealing for Justin…

SM: It’s just written on my own.  It’s like with visual art, a person has an idea of what they want to get made, but a lot of times with musical art, it’s collaborative, or you have composers.

I sort of have an idea of how I wanted it to fit together, how the song’s finished, created form.  Sometimes it makes more sense to me to do that than make a proper ‘document’ of a recording.  But then live, you have a band, and you’re all vibing off each other and all that…

So I don’t know which one’s better – I’ve gotta figure that out.  They’re both great.

QRO: You mentioned SXSW – what do you think of ‘industry festivals’ like that, or CMJ (QRO recap)?

SM: There’s pros & cons.  I think they’re great for exposure, and it’s a business – we’re all part of a business, whether we want to admit it or not.

But, at the same time, if you want to see a good show, I wouldn’t say you’re going to see it at SXSW.  You’re going to see ‘throw them to the lions’…  Not to say a bad show, but not the same thing as a real show.  It’s more for the industry and promotion, but that’s good too.

QRO: B.J., is he difficult to produce?

QRO: Is there a ‘Brittany’ of “Brittany’s Back”?

SM: Is there an actual ‘Brittany’?  Yeah.  I don’t want to get into the details – it’s a sort of a snide little song.

SM: Everyone thought I was talking about Brittany Spears – that was the pun, I guess.  But there is a real ‘Brittany’…

QRO: Are there any songs you particularly like playing live?

QRO: Are there any songs you can’t play live, because of the arrangement, or just don’t like to play?

SM: With the current line-up – and to our credit, it’s only been since March; I think we’ve only been a band for three months, four months – there’s still three or four songs we haven’t learned, in the catalogue.

MT: But our ability to play them, no, for the arrangements, not at all.

QRO: Are they older songs or newer songs?

SM: Some older and some newer.  We honestly haven’t had a chance to get into the rehearsal space and flesh them out.

But I think we can do anything – we can play… “Freebird”

QRO: Now you’ve opened yourself up to people requesting “Freebird”…

QRO: What cities or venues have you particularly liked playing?

SM: The National in Richmond is a beautiful place – maybe one of the best on the East Coast.

MT: It was gorgeous.  The hospitality was so good.

Johnny Brenda’s was amazing, too, as far as hospitality and the sound.

SM: We love the Bowery – we played the Bowery with The Rosebuds (QRO photos from that show) a while back.

I like that question – what are some other awesome venues?

MT: I’m kind of getting excited thinking about it…

SM: The Orange Peel in Asheville – we sounded pretty good; we kind of fucked up that night.

MT: Speak for yourself…

SM: If you want to see The Love Language in their most comfortable element, it’s in Wilmington, North Carolina where we do our best shows.  They’re just crazy out there…

Whatever, I’ll just say it – this is the one that comes to mind.  What is that town where the bartender brought all those shots?

SM: That we don’t remember what city it was might help you understand…

This was with Cursive, somewhere in the Midwest – it was a ‘city’ city; there were tall buildings.

Anyways, the bartender in this particular club – this is already a bad story, ‘cause I don’t know the context – the bartender is sort of infamous for getting the bands really wasted…

MT: Oh, that night – I thought you were talking about…

SM: So she was giving us a lot of drinks throughout the night.  Apparently, she’s been in trouble with the club about that; they’ve sat her down, ‘You need to chill out…’

SM: We were victims…

We went out to a karaoke bar, and I remember seeing her, this girl, she’s coming through and I swear she had twenty shots of whiskey, somehow, in two arms, just passing them out, over and over.

Tim [Kasher] – all the Cursive guys were there.  We were singing karaoke; there was a horse mask involved…

MT: Someone was wearing a horse mask…

SM: All I know is, at the end of the night, we were at the pool, and

In the morning, I had to apologize to Bob Evans, and make sure everyone was okay.

MT: It was a rowdy night – I showed up and you guys were all naked…

QRO: Oh, and finally, has anyone gotten Missy a cupholder or sippy cup yet [like she said she needed, because she always spills her drink on stage]?…

MT: No one’s gotten me one yet!

I’ve spilt my drink on my keyboard twice – I’ve probably spent three hundred dollars in repairs on it.

SM: We have a band fund, for amps crapping out and stuff – we told Missy no more band fund; if she spills another drink, she has to pay for it.

MT: I would love it if someone bought me a sippy cup…