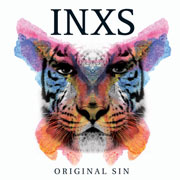 The new release by INXS (without singer Michael Hutchence, obviously) is titled Original Sin.  This is their second studio album since Hutchence’s death in 1997.  The first album, Switch (2005), was with the winner of the Rock Star INXS television show, JD Fortune.  There has been much debate as to whether the band should continue using the name INXS, since Hutchence’s song writing, vocals and charisma defined INXS for many fans.  Wrong or right, generally fans find an identity of a band in the lead singer.  It seems public consensus would prefer INXS go by INXS v.2 or something.  Such clarification would save the band from getting hammered by fans and critics.

On the other hand, the band also deserves the right to use the name.  It was a band of six people, not one.  And truly, this was a band of brothers as Hutchence, Kirk Pengilly, Gary Beers and the three Farriss brothers essentially grew up together.  Maybe when a brother dies, family doesn’t end, but for your fan’s sake (who support you) perhaps a name change of some sort would be nice.  And it might even be considered a tribute and honor of his input.  That being said, the band soldiers on as INXS.

So what about this new release?  The band has called it "re-inventions" of some notable songs with new arrangements and, obviously, new vocalists.  It’s also been called a tribute album – a tribute to the songs themselves.  Perhaps the band would prefer people to listen without thinking of the original versions, but that is pretty difficult to do.  What’s also interesting is most tribute albums do not include the band that wrote them, as INXS are the ‘backing’ band for this release.  Original Sin opens with an instrumental called "Drum Opera" featuring INXS drummer Jon Farriss.  It is the only new song on the record and is reminiscent of some of their creative b-sides.  It has elements of electronics and steel drums and makes for a good start.  Next in line is "Mediate" with Tricky (QRO photos), and frankly, it is very well done.  It is nearly doubled in length from its original version and given an electro/club feel.  So far, not a bad start.

Things though begin to spiral a bit after this.  Rob Thomas is given the task of lending his vocals to the 1984 song "Original Sin".  As much as someone tries to separate this from the original, it proves difficult.  If you like Thomas, you may enjoy this.  If you don’t (and you’re an INXS fan), you won’t want to hear this.  Giving the song a Latino-style treatment complete with some Spanish vocals just makes things more confusing.  Isn’t it a song about a black boy and a white girl?  "Never Tear Us Apart" with Ben Harper and Mylene Farmer gets the unsurprising orchestral treatment.  It starts with Farmer singing in French before Harper comes in and they sing in English.  Again, on it’s own it is okay but it’s hard to listen without running it through the filter of the original.  The majesty of the original probably should not be altered.  Pat Monahan of Train (QRO photos) takes on "Beautiful Girl" and does an adequate job.  Keyboards and acoustic guitar open the song, and drums kick in around the halfway mark.  Monahan does let his vocals soar near the end and he gives it a nice touch.  He picks up on the longing within the song for this beautiful girl.

Deborah de Carroll turns "New Sensation" into a boring song lacking the firepower of the original.  Shouldn’t a "new sensation" overwhelm you?  Hutchence made sure listeners could feel what he was singing.  De Carrol’s version has nearly no sensation at all.  INXS first single "Just Keep Walking" had a great punk/new wave vibe fitting in with its 1980 release and Dan Sultan gives it a soul makeover.  In a way, it recalls Hutchence’s duet with Ray Charles from the 1993 track "Please (You Got That)".  "Mystify" gets a similar treatment as "New Sensation", sung in French by Loane.  Mystifyingly boring is more like it.  John Mayer (QRO album review) plays on this, stretching it out way longer than most will have the patience for.  "To Look At You" is sung by Kav Temperley of Australian band Eskimo Joe (who have been compared to INXS).  This is probably one of the better songs on Original Sin.  His vocals are reminiscent of both Hutchence and latter-day INXS singer Fortune.  It isn’t much different than the original, but it has a swagger some of the previous songs could have used.  Nikka Costa takes on (the originally rocking) "Kick" and the only kick is the sound of listeners skipping to the next track.  No Nikka, we do not "feel the same" as you.  Her vocals aren’t bad at all and Costa fans will probably enjoy this.  INXS fans are another story.

Original Sin winds up with the tracks "Don’t Change" and "The Stairs".  "Don’t Change" features INXS’ Pengilly on lead vocals.  It’s admirable for Pengilly to take this frequent concert closer and his vocals are good.  Gone however is that sense of power, urgency and swagger in the original.  Current (on and off) singer Fortune gives his spin on "The Stairs" and keeps true to his faux-Hutchence vocal delivery.  Nothing is added and nothing is gained.  While Original Sin does have a few cool moments, it’s merely not enough to make it a worthwhile purchase.  Maybe it will be for new INXS fans that never really heard the band with Hutchence, but they don’t need this release.  They need someone older to give them a greatest hits CD where INXS, for a time, ruled the world.  When Pengilly sings, "Don’t change a thing for you / Don’t change a thing for me," one can’t help but to think exactly that with this release.  Don’t change a thing.