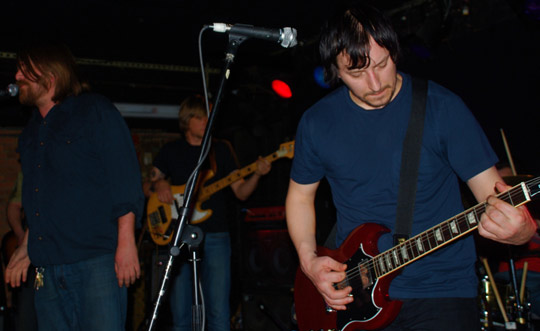 It’s been a long time for Iran.  The Brooklyn trio (named not after the country, let’s get that straight, but a character in Philip K. Dick’s superb Do Androids Dream Electric Sheep? – which was later adapted, minus Iran, into the seminal Bladerunner) put out a pair of acclaimed, fuzzy records in 2000 & 2002, Iran & The Moon Boys, respectively.  But then guitarists Kyp Malone & Aaron Romanello went to other things: Malone to join TV On the Radio (QRO live review), Romanello to found Say Hey Records (White Rabbits, Miles Benjamin Anthony Robinson).  But singer/multi-instrumentalist Aaron Aites got the band back together this year for Dissolver (QRO review), a record that turned down the fuzz for a more accessible sound.  However, live, the band still has some rust, with the music only just overcoming it all, as it did at New York’s Mercury Lounge on Friday, March 6th.

Of course, the odds were rather stacked against Iran that night.  To start with, Kyp Malone wasn’t in attendance (guess he was too busy appearing on Colbert Report or something… – QRO’s Indie on Late Night TV).  What’s more, Iran 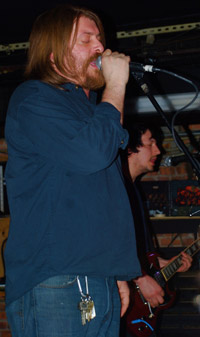 was opening up for Handsome Furs, the husband-and-wife side-project of Wolf Parade’s (QRO live review) Dan Boeckner, only further pointing out the missing man from the bigger band in Iran.  And the show was sold-out, mostly by Handsome Furs fans, if their packed crowd was any indication, meaning that Iran had to play to people hotly anticipating the Furs and their upcoming Face Control (QRO review).  And, like many a show at Mercury (QRO venue review), the line-up wasn’t of similar-style bands.

Furthermore, Aaron Aites, in particular, could use some more work in his stage presence.  He said, “If I seem jittery, it’s because they’re not letting me smoke – are they hitting you with that too?”  Apparently the man hasn’t been in a New York club – or even a bar – in the past six years (aside from last month’s record release show at Death By Audio, a DIY venue that lets you smoke, even bring in your own beer – QRO venue review).  And what likely were nerves did come off a bit like disaffection from him to playing a show, as if Aites was only begrudgingly doing it.

Yet somehow, the music still shone through.  While Iran stuck mostly to Dissolver, they started with The Moon Boys’ “We Could Go Away For a While”, whose fuzz translated more epic, live.  And Dissolver was out (unlike Handsome Furs & Face Control – their distributor wouldn’t even allowed them to sell the record at the show; instead, they gave away four promo copies to people who were the first with the correct guess to trivia questions, though the duo ignored your correspondent, probably assuming that press would get the album for free & early anyway…), which meant that those ‘in the know’ could really appreciate tracks like “I Can See the Future”, “Airport ‘79”, and “Buddy”.  The band unfortunately didn’t play Dissolver’s top-notch closer, “Evil Summer”, but “I Already Know You’re Wrong” served well as the set ender.

To harp on what was missing is a little cruel (and it was surprising & interesting that the TVOTR-like vocals on “Future” and “Wrong” were from Aites), and the hipster-haters will certainly have their knives out.  But if Iran can keep rolling long enough, their live shows will be able to match their excellent records. 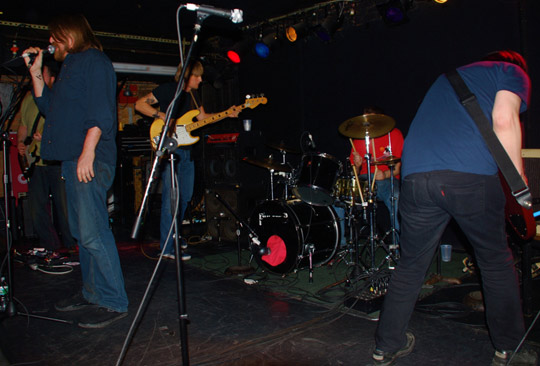