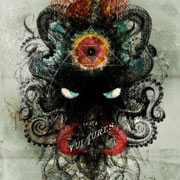 Despite how conventional Vultures sounds, Irata proclaim their originality.  “Modern heavy bands stay interesting not by hashing and rehashing familiar tropes,” their press reads, “but by throwing curveballs… Greensboro, NC’s Irata is such a band.” But there are tropes aplenty.  Familiar ones, which Irata hash again and again.  The singing sounds like it wants to be menacing, but it’s too routine for that.  As for its content, if you’ve heard five metal albums in the past ten years, you’ve heard this stuff before.  A “barge is going down.”  A guy “crept down from his mountain.”  Some other guy “rides at midnight.” The “curveballs” bit is especially silly considering that Irata’s strength is rocking out, not weirding it up.  They play tight and even groove a little.  The record sounds good loud; drums in particular are heavy yet agile, deep but not muddled.  They’ve got a few good riffs, and a strong solo or two.  The singing, though not revolutionary, can sound rad. But there’s nothing novel about how they put all this together. One actual curveball, or at least a slider, is drummer Jason Ward’s synthesizer.  Although nicely unexpected on this kind of record, it’s mostly misapplied, adding hackneyed ambience to some of the sparser, gloomier moments.  It does show well at the end of “Miser”, turning what should be a bold, triumphant climax kind of rotten and uncertain. The record suggests a fun, hard-hitting live show, but is itself unremarkable.  Let’s not even get into the press’s Don Caballero comparison. MP3 Stream: “Old Smoker“