Ivan & Alyosha – All the Times We Had

There are way too many acts that confusing a relaxed sound with a relaxed ambition – but not the exceedingly nice Ivan & Alyosha.... 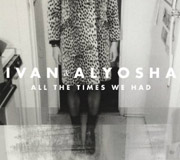 There are a lot of nice bands out there with nice, relaxed sounds – that are also, ultimately, pretty boring.  Garage-rock has gone relaxed, shoegaze has returned relaxed, neo-eighties has returned again relaxed – it can be very hard to tell one relaxed act from the next, and really not worth it.  But there are acts that do relaxed right, that excel at being nice – such as the more country Ivan & Alyosha on their debut full-length, All the Times We Had.

Click here for photos of Ivan & Alyosha at SXSW 2013 in Austin, TX in the QRO Concert Photo Gallery

Click here for photos of Ivan & Alyosha at Somerville Theater in Somerville, MA on January 19th, 2012 in the QRO Concert Photo Gallery

Not a duo but a band (the name comes from Brothers Karamazov), Ivan & Alyosha made some splashes at South-by-Southwest, got some NPR notice, put out some EPs, but All the Times We Had is their first full-length effort.  ‘Effort’ might sound a bit contradictory after hearing the LP, as there is a relax that cuts right through it, from opener “Be Your Man” to closer “Who Are You”.  But it’s a better relax, as exemplified by those two songs, the sly but heartwarming opener and the strong alt-country/rock closer.  In between there is some relaxed country-folk beauty (“Running For Cover”), pedal guitar that gets bigger (“God Or Man”), and some really nice country pickin’ (“Don’t Wanna Die Anymore”).  The record is never revelatory, but always really “Easy To Love”.

It’s actually rather hard to standout as a ‘nice’ band – kind of like standing out as a ‘nice’ guy.  There are way too many acts that confusing a relaxed sound with a relaxed ambition – but not the exceedingly nice Ivan & Alyosha.

Ivan and Alyosha – Be Your Man