Iyla brought her garden-gestalt ‘Other Ways 2 Vent’ tour to Atlanta’s Vinyl in support of her second EP of the same name.... 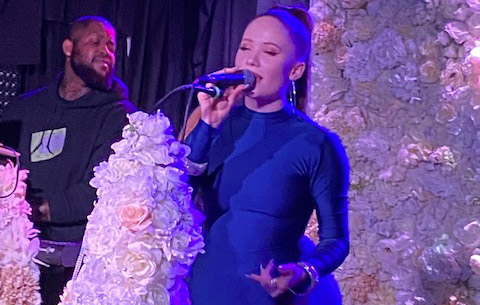 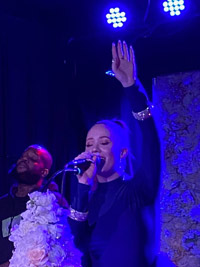 Today’s online leakocracy culture may make it difficult for anyone to freely remember the double-blind days when the internet was in its infancy and so was our collective awe of it, and thus how it felt that first time you stumbled upon Tumblr to find that whole worlds of imagery and inspiration surrounding all your favorite things had been curated by this new and invisible entity, seemingly all for you. If you can remember the original euphoria and sense of discovery associated with that feeling at all, a new-baby talent on the scene named Iyla is here to hand it right back to you. Iyla brought her garden-gestalt ‘Other Ways 2 Vent’ tour to Atlanta’s Vinyl on Wednesday, February 26th, in support of her second EP of the same name. All aficionados of poetic posies, feminine fronds, and truth-tillers of the techno-heist gamine type, rejoice and read on.

Encased on all sides by a white carpet of raised blossoms that functioned as backdrop, underfoot forest and even climbing microphone foliage, the first sight anyone gets of Iyla she appears closed in a virginal cloud box built for a butterfly. A particular brand of ethnobotanicals native to Los Angeles (and no, we do not mean weed variations) have enjoyed pride of place in Iyla’s artistic representation of herself from the beginning. Her 2018 release, War + Raindrops, features an ineffaceable image of her pouring a Niagara of colorful petals from her open mouth, like an emesis of efflorescence, on its stirring cover.

One is put immediately in mind of the Victorian language of flowers, or perhaps Shakespeare’s Ophelia with her bouquet death-monologue, wherein she hands out to the personages that have effectively killed her symbolic blooms whose cultural meaning in Renaissance England would have missed not a single audience member of that time, high or low born. Iyla uses flowers in a telltale way like this, in a manner that both undercuts and bolsters the themes of her songs. It is openly discernible from the very first song on War + Raindrops, deliberately disguised in name as simply “Flowers”, but bearing the lethal lyrical burden of informing lovers everywhere that flowers don’t fix anything, so “[email protected]#% flowers” becomes more than just the guiding refrain of the song. It is Iyla’s undercurrent. It is also a gloriously punkrock and irreverent shirt you can buy from her on tour: black, long-sleeved, bearing the simple white block-lettering of “[email protected]#% Flowers” and nothing else. What else does anyone need, really?

Iyla advances like an adaptogen ambassadress on that ageless notion of the way young women used to be referred to as “deflowered” or “plucked” once their virginity was gone, and viciously, sweetly, snidely demolishes the idea that such a moment could ever be synonymous with true womanhood being granted in exchange. The paternalistic bargain that womanhood, in all its glamour and gore, could be yet another hand-me-down from the hands of a man is not one Iyla is willing to broker, and nor will she forfeit a second’s worth of overt, on-the-nose womanhood for the refusal either. Antiquated ideas about what a women can say or enjoy are not a lulu she is willing to inherit. The insistent message resident in Iyla’s lyrics and persona state that no such philistine philosophies of idealistic theft-creation can or will ever instigate her inner power or latent sensuality. You cannot gift her with what she already owns, and she will thank you not to be so stupid as to try.

There is a superior ultradimensionality to Iyla that one-dimensional words are simply unsuited for. She is Lana Del Rey meets Aaliyah, and Ariel by way of Mae West. With a sky-high ponytail of natural red hair cascading to her tulle-train-clad-bum, she is a diminutive Disney princess come to life, but with the nails, bling, and misanthropic misdemeanors of Missy Elliott. She has, in effect, followed the train-scent of 1958-1959 in rock history, the era of the teen queen, and wolfed all those drive-in stories like post-party 3am cake, only to strongarm them to rebirth in springing from her forehead fully formed, like Athena from Zeus, in war-like feminine form. This tiny empress may well be in the backseat outside the soda jerk with you, but you can bet your last dime that she owns the rolling roulade that brought you both there. Listening to an hour of Iyla’s sung stories feels much as if some incredibly keen LA-street version of a Dolls Kill model (read: prettiest and coolest girls on the planet at present) came to life and started telling you all she had seen and experienced in her nocturnal ramblings.

Iyla is in easy possession of a voice that would have made it in the 1950s. This is the highest verbal compliment that can be paid a singer because the 1950s in American radio was a time when an artist had to reorient the ceiling with a totally natural vox in order to even register as a singer, much less to make a career as one. Iyla’s voice is unlike anything statistically available in the contemporary era of music. If carillon bells could be hung and rung in those underground catacombs of Edgar Allan Poe’s “A Cask of Amontillado”, her voice would be found blending and dominating those holy subterranean sounds. If her voice were a perfume it would be chypre – all citrus topnotes, animalic oakmoss and ocher.

You can take a glance at Iyla’s fanbase, who jam-packed Vinyl to the walls this night to see her, to learn something about the nature of her coulee and calyx. Soul enthusiasts of every stripe, gorgeously self-actualized (and super-young) gay men, avid hip hop worshippers, and the most inspiring flock of heterogeneous girls imaginable – all scream-singing along when Iyla busts out “Shampoo,” an early YouTube ode to macabre almost-cohabitation. The Method Man-assisted “Cash Rules” further illustrated her quatrefoil influences, not to mention the raging reaction she is capable of wringing from her audience in a single piece of phrasing. Though her lyrics typically center on the oblique amour folles of life, she has conspicuously drawn her power as a creator from any well she deemed worthy of a bucket. Saving the sovereign love-jam, “Juice”, for the encore meant the sonic wall in the room became a breathtaking wattle-and-daub construction Iyla was actively creating with her audience, who justifiably could not get enough.

Iyla is an urban master gardener working with all the expertise and cultural clout of Capability Brown, but in the fecund soils of timeless feminine emotional quotients and soniference. Hers is a horticulture of heroines, and what a per curiam hybrid perennial she has made for us all out of that compunction. Iyla represents an incredibly rarefied experience for any appreciator of musical acumen and/or women. A kind of Angelus to angelic girlhood, she is a lone counterforce to that oh-so-common way that the vulture capitalism in the pug-ugly music business swoops in and quickly dumb-colors anything that could issue from the lips of a woman this young, typically well before you ever have a chance to know her name. Iyla’s vixen-like vorfreude puts a hard stop on the way that the industry desiccates female artists to little more than cultivatable market gardens—ever without recognition that wildflowers bloom just as well and beautifully as those born of the hothouse, nor any understanding that all flowers do not bloom to be sold for a truncated life in pretty vases. Go see her because she lives outside the hucksterism. Iyla is a frangible bullet of a singer – no one is unstruck – and the effect of her, once lodged, opens out just like… a flower.