QRO actually reviewed “Dinosaurs” in March 2019 (QRO review), but J GRGRY made a new version, after finding several problems with the previous incarnation, as he explains: “The version... 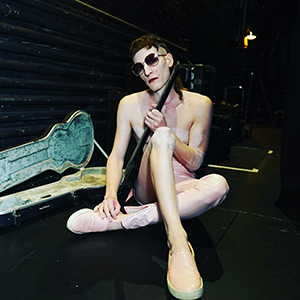 QRO actually reviewed “Dinosaurs” in March 2019 (QRO review), but J GRGRY made a new version, after finding several problems with the previous incarnation, as he explains:

“The version from early 2019 was a demo we were working on. I wanted to have some new material out for the tours I was going on that year and I wanted to test the songs out on the road because the engineers were stalling and things weren’t clicking after initial tracking was done.

The people I was working with at the time were drinking on the job and working on other projects and sessions and seemed to be losing track of what our project was. Ultimately, I was becoming worried about their abilities. I was handcuffed at the time by the money we had already paid them and felt cornered by their attempts to take advantage of someone with no family, no money and a husband who has to travel for work.”

Those problems he was fearful about became true on the road, as all sound engineers struggled to find the sweet spot for the songs of that time, as most of them had editing problems of all kind (mixing, overdubbing, track out of phase, etc.), which meant another investment on thousands of dollars to fix them all, including this one, “Dinosaurs”.

Now, the song sounds more ordered, fluid, less constrained and more solid, without letting go of the majestic soundscapes he’s showing of late, and the same influences from U2 or The police can be heard there. The overall impression is a melody that sounds a tad more mature than before, due to 18 months of different struggles in GRGRY’s life.

It’s still a song you can’t ignore. The music not only leaves space to accommodate the voice, but also helps GRGRY to send the message clearly to the listener.

At least, the lyrics didn’t have to be tweaked as, surprisingly, they were even more suited to reality than GRGRY anticipated: “Something else I discovered touring with “Dinosaurs” in 2019,” admits GRGRY, “Was that my specific anti-Trump message was more spot on than I thought it to be. The lyrics in the verses talk about his sheer ineptitude and that he doesn’t even know an IQ test isn’t something you pass or fail.”

The chorus is a reference of Trump overusing Twitter as his playground to throw whatever tantrum/crazy idea/fallacious opinion Trump may throw onto social media (“I’m not gonna listen anymore to the birds chirp down the street, no. I’m not gonna let ‘em take anything other than they’ve already taken from me”.)

“Like I mentioned previously,” continuous GRGRY, “This was a call to myself to live authentically and passionately. Ultimately, to fight daily against racism and white supremacy. To fight for women’s rights. To combat homophobia and transphobia, and try to create a safer more loving world, day by day, person by person, as I go,” points out the musician.”

Since he moved from Seattle to L.A., J GRGRY had to endure many setbacks – financially, personally and professionally – so this new version of “Dinosaurs” has to be seen as the result of a fight to keep improving and not resting in the laurels of having one of his songs – the hyper catchy “Don’t Ever Give Up” (QRO review) – hit more than one millions views on YouTube.

And, maybe, that’s the greatness of this relatively unknown artist: his songs start in one place and end up in a completely different one.