Jack Johnson : To the Sea

<img src="https://www.qromag.com/wp-content/uploads/2010/08/jackjohnsontothesea.jpg" alt=" " /><i>To The Sea</i> is not a great leap forward in any direction, but it shows Johnson at his most comfortable and at ease. ... 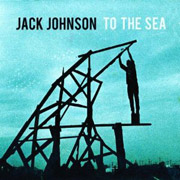 Jack Johnson seems uninterested in taking risks.  But then why should he?  He has developed a consistent and successful formula that has turned this surfer-turned-musician into a global superstar.  Yet has this affected Johnson’s music in the slightest?  Not really.  He still sings about surfing, young love, the environment and a number of other light and often quite frivolous topics.  Johnson’s fifth studio album (not counting the number of soundtracks and compilations he has been involved with) sees the laid-back beach bum at his best.  He has perfected his distinct acoustic sound and has elevated this form of feel-good chill-rock to its highest state.

At this point in Johnson’s career, one might expect some twists, turns – to see him convert to Islam, change his name or shave his head.  But clearly Johnson is content with his sound, his belief system and his hairstyle, albeit it’s a bit longer now.  And frankly it is nice to know that while the economy is crumbling and oil spills are destroying our natural environment, that ol’ Jack is still here and still chilling out in a hammock somewhere in the islands.  Yet from his ten-odd years in the music business, Jack has developed a sense of wisdom and experience that can be clearly seen on To The Sea.  He offers whimsical insights that may seem contrived on their own, but come out sounding meaningful and deep when illuminated by his breezy, signature guitar riffs.

But it’s often Johnson’s cracks at profundity that fail to hit the mark.  He first attempted to tackle heavier themes on 2008’s under-whelming Sleep Through the Static.  War, violence, fear and hatred were all lyrically present here – but they came off feeling unconvincing and just wrong when fed through Johnson’s mellow, acoustic machine.  To The Sea has him return to his playful and light-hearted self.  But there are times when he aims for lyrical depth and again, falls a bit short.  "Pictures of People Taking Pictures" repeats the title over and over in some sort of pseudo-social commentary that ends up confusing and irritating.

But on the most part To The Sea hits with perfect accuracy.  The record’s opening and lead single, "You and Your Heart" is far more distorted, fast-paced and hard driving than usual.  But with his happy-go-lucky disposition and tongue-and-cheek lyrics, dedicated Johnson fans will find the track familiar and comforting.

"At or With Me" has Johnson dealing with paranoia with a Hendrix-inspired guitar solo and random proclamations of, " Baby, those are such great shoes!"  "From the Clouds" is the quintessential Jack Johnson song.  Heavy rhythm guitar complements a loose and reggae-ish drum pattern; then a throbbing bass line and staccato piano are added to the mix.  It is catchy, fun and as sing-along as anything Johnson has ever done.

No, To The Sea is not a great leap forward in any direction, but it shows Johnson at his most comfortable and at ease – which translates to a fluid, coherent and simply enjoyable listening experience.  No, he isn’t interested in changing the world musically, however he is a passionate social activist and philanthropic environmentalist.  No, there are no deep and existential insights, just Johnson providing us with a 41-minute escape from life’s stresses and a bit of guidance on how to live like he does.  On "The Upsetter" he tells us to, "Stop upsetting yourself."  Not bad advice at all.

Fjord Rowboat : Under Cover of Brightness