James and Echo & The Bunnymen

James and Echo & The Bunnymen came to Bristol.... 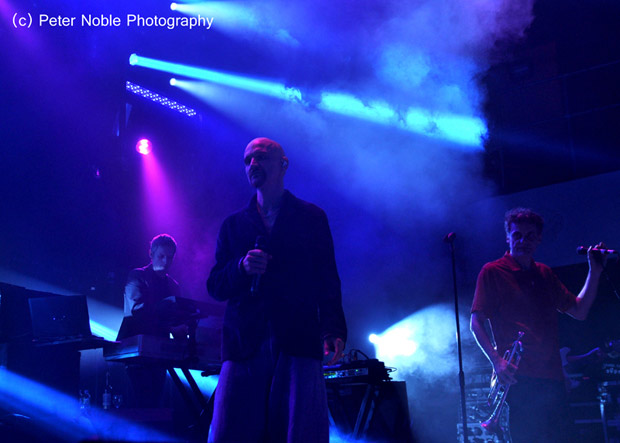 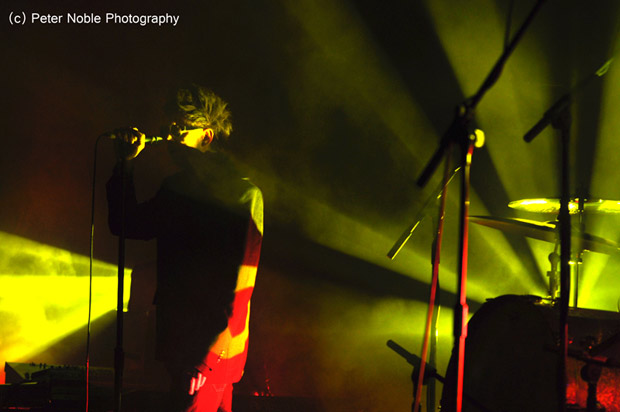 Click here for QRO’s review of Echo & The Bunnymen playing Crocodiles and Heaven Up Here at Paradise in Boston, MA on May 9th, 2011

It had been the best part of 30 years since Echo & The Bunnymen had last played the same venue, Colston Hall.  That night they were the headlining band supported by Strawberry Switchblade, but Wednesday, April 17th, they had agreed to warm up for James, who once supported The Smiths when they played Bristol around the same time.

Not that Echo & The Bunnymen were about to play second fiddle to James.  By the time they took to the densely covered smoky dry ice stage, the hall was already packed.  Many of the sold out crowd had come to see the Liverpudlian Bunnymen as much as Mancunian James and several t-shirt wearing fans were visible.

Bunnymen played a steady twelve-song set, going through a varied repertoire, all well received.  Back combed hair and oozing cool, lead singer Ian McCulloch was on his best behaviour (except for the ciggie he sparked up on stage), with renowned Mac the Mouth under wraps.  He appeared sober, sipping on orange juice from a carton and hitting the notes perfectly. 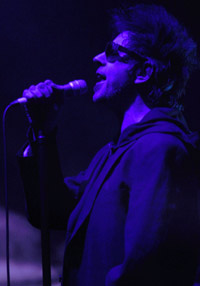 There was variety but complete professionalism to the set starting with “Lips Like Sugar” taken from the album that last saw all the original members of the band together, prior to the untimely death of drummer Pete de Frietas in a motorbike crash.  “Villiers Terrace” from the début album Crocodiles saw the dark trench coat and sunglassed lead singer slip into some blues, blending The Doors’ “Roadhouse Blues” into one of their own workings.  “Killing Moon” was haunting and “The Cutter” saw the crowd swaying and dancing along with arms raised as one of the best guitarists, Will Sergeant brought proceedings to a rousing finale.

Click here for QRO’s interview of Larry Gott of James

Click here for photos of James from 2012 Kendal Calling in Cumbria, U.K. in the QRO Concert Photo Gallery

Click here for photos of James at 2012 Wychwood Festival in Cheltenham, U.K. in the QRO Concert Photo Gallery

Click here for photos of James from 2012 Coachella Music Festival in Indio, CA in the QRO Concert Photo Gallery

Click here for QRO’s review of James at Roseland Theater in Portland, OR on April 9th, 2012

Click here for QRO’s review James at Doug Fir Lounge in Portland, OR on October 8th, 2010

Seven-piece James take to a far brighter extravagantly lit up stage.  A beaming singer Tim Booth in a see through electric blue shirt and baggy cotton trousers joked with the audience on a regular basis.  The first song was “Dust Motes” is fragile, gentle but is a calm before things take off.  “Just Like Fred Astaire” saw the frontman climb down into the pit onto the railings, before disappearing into the crowd, only to appear at the back of the auditorium directing a mass sing along.

“Waltzing Along” and “Seven” saw people out of their seats and singing along and encouraged along by Andy Diagram the trumpet player.  “Dream Thrum” was beautiful, enhanced by Saul Davies’ mesmeric violin playing.  Old songs like “Johnny Yen” from the James début Stutter got an airing, freeing Booth to gig around like a loon.  “How Was It For You?” was an absolute romp with thrashing guitars.

“Five-O”, another track from the 2001 album Laid, started with an extended intro from violin and trumpet, which worked surprising well whilst frontman Booth took some time to rest upon his drummers riser to take in his bandmates craftsmanship.  The band headed down the home straight with some of their most popular hits like “Sit Down”, “Born Of Frustration” and “Come Home”, which is the closest thing James have ever done to a dance track. 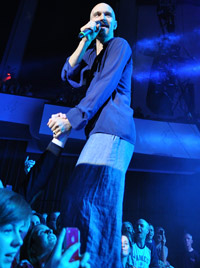 The band returned for an encore and stated that Stuart Pearce (ex-England manager and football player) had said the band had not played enough hits the last time they played Bristol.  So to redeem themselves, James finished with “Getting Away With It”, the hypnotic chant-like “Sometimes”, and the lively “Laid” closed the evening.  The magnificent seven stood at the front of the stage as the lights went up to soak up the enthusiastic standing ovation from the capacity crowd.