James – Girl At the End of the World

Whenever the world ends, it would be a much nicer end with James in it.... 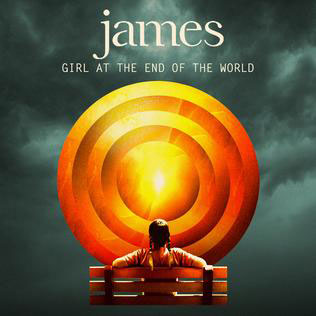 James emerged in Manchester as the musical city’s scene was shifting from the dark new wave of Joy Division to the bright dance of ‘Madchester’, but James always stood apart from such styles (not to mention their time as an American nineties alt-pop hit with “Laid”). Ever since their reunion in 2007, the group has seemed particularly confident in their own unique sound, and with Girl At the End of the World, probably will be right up until the apocalypse.

The title is more ironic that straight-faced, as James is more about the Girl than the World, up to and including their cheer-as-the-sky-falls titular closer. There are some darker tones, like the pressing opener “Bitch” or the intimate electronic take on todays remote life “Dear John”, but the record could maybe be best summed up with “Nothing But Love”, which is indeed nothing but. Moreover, the large group still has their fine musical skills throughout the album, whether up-close or epic, tech or rock.

The end of the world will probably come to American before Britain (depends where you stand on the odds of, and implications of, Trump vs. Brexit), but wherever it does, it would be a much nicer end with James in it.