Americans probably remember Manchester’s James best from early nineties epic love hit “Laid”, but it’s been a long time since then (just look at the now-bald head of once-curly-haired... 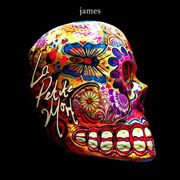 Americans probably remember Manchester’s James best from early nineties epic love hit “Laid”, but it’s been a long time since then (just look at the now-bald head of once-curly-haired singer Tim Booth – QRO photos). James even broke up and got back together, had a miss of a reunion record in 2008’s Hey Ma, but then a hit with 2010’s two-EPs-put-together The Night Before The Morning After (QRO review). Now La Petite Mort sees the band embrace death, life, and synthesizers.

Written after the deaths of Booth’s mother and a close friend, Mort does see death, but only in its celebration of life. Uplift pervades the record, such as the pressing “Moving On”, epic love “Frozen Britain”, and straight-up uplift about death, “All In My Mind”. It can get a little too ‘up with people’ at times (“Quicken the Dead”), but there are also pieces where the group strips down – often into distant tech, like with “Gone Baby Gone” and “Interrogation”, plus the low-key & smooth, almost lounge-wise James of “Bitter Virtue”. Like many, many artists these days, James particularly embraces synths sounds with their new album, but such sounds fit well with the epic and grand opener “Walk Like You”, dance-synth following “Curse Curse”, and growing eighties dance-shine closer “All I’m Saying”.

It’s not exactly new to take the subject of death and turn it around into a celebration of life, but it’s still remarkable when done well, like on La Petite Mort.