James : The Morning After The Night Before 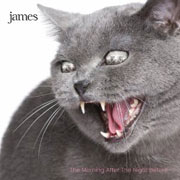 Is it such a new thing that so many bands are reuniting/coming back?  Haven’t bands always been doing this?  Or is it that, in this internet age, where you don’t have to search through record store bins to discover past acts that you missed first time around, there’s just a greater demand for returns (not to mention that their present-day successor projects aren’t making as much money off of non-pirated album sales…)?  Whatever the case, there are certainly a lot of returns these days, and some of them probably didn’t need to happen (Vanilla Ice is back!  Okay, that’s shooting fish in a barrel…) – but a welcome return is Manchester’s James, with their two mini-album/EP combo, The Morning After and The Night Before.

It’s actually unfair to call Morning/Night the return record(s), as it’s their second/third since reuniting in 2007, with 2008’s Hey Ma the actual ‘return record’.  But American ears largely missed that one, and James is coming to the States a lot stronger with Morning/Night, including releasing the two albums as one over here.  And while the U.K. act had success in their home country all the way through final pre-break-up record Pleased To Meet You in 2001 (after which singer Tim Booth left to pursue solo projects; his return in 2007 prompted the reunion), most in the U.S. probably just remember 1993’s "Laid" and the album of the same name, which actually had far more to go with its eponymous single that one might have expected.  Morning/Night aren’t as pitch-perfect as Laid, and there are maybe a few too many tracks (not surprising, given the mash-up of two records, coming to fifteen songs total), but it is/they are the James you wanted back.

Click here for photos of James at Wonder Ballroom in Portland, OR on October 8th, 2010 in the QRO Concert Photo Gallery

Click here for photos of James at Webster Hall in New York, NY on September 28th, 2010 in the QRO Concert Photo Gallery

Of the two ‘mini-albums’, The Morning After is the more stripped one, and thus the weaker half.  Not that James can’t do stripped, as their balance between brightness and haunt hit the sweet bare spot on "Tell Her I Said So" – but they’re not quite on the mark with the prior "Dust Motes" or subsequent "Kaleidoscope", and the reduced Morning finisher "Fear" is too small.  But the brighter, cheerier end of the James spectrum comes out well in "Rabbit Hole" – and even if you can’t tell whether James is praising the liberal oasis or ironic-praising, "Make For This City" works.

After the tiny "Fear", the embiggening soul of The Night Before opener "It’s Hot" comes in like a gust of air off the Springfield tire fire, and gets one to the "leap of faith" from the chorus line.  The bigger nature is all over Night, and is pulled off very well by James, such as the rocking, anthem-size "Shine" or what might just be a song detailing a modern-day Fantastic Voyage in "Dr. Hellier".  Particularly working is the balance between Booth’s vocals & the rest of the band’s instrumentation, which saves the singer from going overwrought on "Crazy" (a pit he occasionally falls into on the less-instrumented The Morning After), but goes grand to parry the less emotional Booth on "Hellier".  Closer "Hero" does the alt-modern blues-gospel with electronics that The Cold War Kids (QRO live review) still haven’t fully gotten right – nor was gotten quite right on Morning opener "Got the Shakes".

James are not unfamiliar with the ‘comeback’.  Back in the late eighties, after being touted as the ‘next big thing’ in the U.K. scene, only to fail to be so & get dropped from their label, the band was forced to act as human guinea pigs for medical trials to earn some pound sterling.  The ‘Madchester’ spark of interest in their hometown scene in the early nineties revived & revitalized the act (which swelled to its current seven members).  The Morning After The Night Before might not bring James as high as Laid, but it’s great to have them back and on form.