Everyone’s favorite – recently de-hyphenated – MC is back for another round of world dominating rhymes and gangsta claims like, “You in da presence of a god!”... 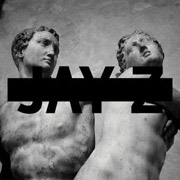 Saturday Night Live’s Jay Pharoah does a spot-on Mr. Knowles impression.  If only we could see him do a sketch of what it must have been like to be a fly on the wall when Jay Z came up with the title for his new album.  It’s easy to hear that famous goofy voice saying something along the lines of, “Screw it, let’s jus throw bofe names on there!  #mylaugh”

Everyone’s favorite – recently de-hyphenated – MC is back for another round of world dominating rhymes and gangsta claims like, “You in da presence of a god!”  Even though it was really no secret in the first place, it’s becoming more and more apparent that rappers in general seem to think that they are God’s gift to humanity, or gods themselves, for that matter.  For crying out loud, what are you supposed to do with an album entitled Magna Carta… Holy Grail?  Is this supposed to be the album that Christ himself sipped from after it laid the groundwork for modern democracy?  If so, the timeline on that is just plain screwed up.  Did Mr. Beyoncé Carter even finish high school?  Or has he transcended so high (say “Hello” to Yeezus for all of us while you’re up there, Jay) that it’s okay for him to not adhere to the generally accepted timeline of history?

In short, Magna Carta… Holy Grail blows its load on the first two tracks, the great and catchy “Holy Grail”, which features the lovable Justin Timberlake and the funky “Picasso Baby”, and then spends the rest of its time making you want to just go listen to “99 Problems”.  By the way, “Holy Grail” features a sample of Nirvana’s “Smells Like Teen Spirit” and thankfully Kurt Cobain’s beneficiary Courtney Love signed off on its use because the last thing the universe needs is another Love vs. Whomever feud.

There’s also the song “Part II (On the Run)”, which features Blue Ivy Beyoncé or whatever her name is these days.  It’s a take-it-or-leave-it song, but one that is sure to get attention for featuring Bey-Z.  Where the heck did “Part I” go anyway?  Oh wait, that’s right, we’re talking about Jay Z here and he doesn’t have to do a “Part I” just because you expected it, playa.

From here on out, Hip Hop as we know it is a race between Jay and Kanye to see who can reach the top of Mt. Zion first and have the most ludicrously-titled album along the way.  And perhaps – if humanity is worthy – somewhere in there these two besties will team up again, this time under the moniker “‘Ye Z” or maybe “Jay Zeezus” and release an album entitled Declaration of Independence… Crown of Thorns.  Until then, do yourself a favor and go back to the good old days by spinning The Blueprint or The Black Album.