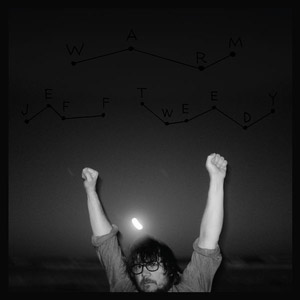 You already know & love Jeff Tweedy. The main man behind the highly successful definition of alt-country, Wilco, is both “Trying To Break Your Heart” and “The Man Who Loves You”. While Wilco has numerous impressive musicians, from the impossibly good solos by guitarist Nels Cline to sweet foundation of bassist John Stirratt and keyboardist Pat Sansone (who have their own great project, The Autumn Defense), it is still focused on the man in the center, Mr. Tweedy.

While he’s also worked with others, from Billy Bragg to Mavis Staples to his own son, only now does he deliver his first solo album of originals, Warm. While it can’t be an amazing classic Wilco record, it is very much the Jeff Tweedy you already know & love.

Click here for photos of Jeff Tweedy at 2019 Newport Folk Festival in Newport, RI in the QRO Concert Photo Gallery

Even in his big Wilco numbers, Tweedy has a charming personality, and that comes through clearly on this much more stripped down affair. His wry nature, always effective, is displayed in “Some Birds” and the trot “Having Been Is No Way To Be”. There’s his sad-but-sweet side on the twang of “Don’t Forget” and “I Know What It’s Like”, where he comes off like an old friend. And there’s even a great cheery sway ditty, “Let’s Go Rain”.

Admittedly, Warm does feel a bit like stripped down versions of Wilco songs that you don’t know, but it was always going to be that way, though some of the slower numbers could be too slow. It decidedly does not feel like a pointless vanity exercise by a successful frontman unnecessarily going solo [cough-Dan Auerbach-cough], but rather just another reason to love Jeff Tweedy.