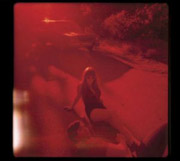 Despite the massive embrace that the alt-world has given to Americana-country, it still feels like alt-artists have to do more than just American country.  There’s the soul-baring nature of singer/songwriter alt-folk, gritty authenticity of backwoods twang, or the ever-popular genre mash-up (such as marrying alt-country with indietronica).  Aside from some acts that have been doing indie-country since long before this current wave (such as Wilco – QRO live review), who’s just doin’ country?  Well, singer/songwriter (and indie super-couple) Jenny Lewis & Jonathan Rice are as Jenny & Johnny, and while not exactly revelatory, they are Having Fun Now.

Though she still has her day job as the leading lady of alternative outfit Rilo Kiley (QRO album review), Jenny Lewis has been stepping out in a country way for awhile now, often with others, from her debut (with The Watson Twins – QRO album review) Rabbit Fur Coat, to solo follow-up Acid Tongue (QRO review), both steeped in the ways of Americana, but with Lewis’ pop sheen.  Riding shotgun on this journey has been Jonathan Rice, a musician well in his own right, but also part of her band for Rabbit, and producer of Tongue – not to mention Lewis’ boyfriend.  So just as the country of Jenny and Johnny’s I’m Having Fun Now isn’t a surprise, neither really is the pairing (certainly not after actress Zooey Deschanel teamed up with alt-folk singer/songwriter M. Ward as She & Him – QRO live review – but married Benjamin Gibbard, frontman for indie-rock outfit Death Cab for Cutie – QRO album review – with whom Lewis dueted on Gibbard’s indietronica side-project, The Postal Service…).

Click here for photos of Jenny and Johnny at 2011 Sasquatch! Music Festival in George, WA in the QRO Concert Photo Gallery

Click here for photos of Jenny and Johnny at Williamsburg Waterfront in Brooklyn, NY on September 19th, 2010 in the QRO Concert Photo Gallery

Click here for QRO’s review of Jenny Lewis at Battery Park in New York, NY on Fourth of July

Unfortunately, there isn’t really enough that is surprising on Fun Now.  Pieces like opener/single "Scissor Runner" are catchy, enjoyable pop-country, but don’t become much more.  Even the male/female duets & divide of the album doesn’t over-deliver – Lewis pieces like "My Pet Snakes" rise and fall on your feelings about Jenny Lewis, and Rice pieces like "Switchblade" rise and fall on your feelings about Jonathan Rice.  In fact, Lewis probably delivers better than Rice because she actually tries less – the catch & rhythm to Lewis-led "Big Wave" and "Straight Edge of the Blade" stick with you, while Rice’s storytelling "Animal" and more distorted "Slavedriver" aren’t as inspired as he wants them to be.

I’m Having Fun Now does expose somewhat the limits of straight country in the alt-world, as it’s not ‘original’ enough for the hipsters.  Indeed, the record feels altogether less special than Lewis’ Acid Tongue, whose net was thrown wider, leaving her team-up with Rice feeling a little flat in comparison.  But that doesn’t mean you’re not Having Fun.