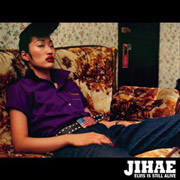 Jihae made a splash in early 2007 with her debut, My Heart is an Elephant, then followed it up first with Afterthought EP (QRO review) this summer, and now the full-length Elvis is Still Alive.  There’s much to like about this record – almost too much.  Sometimes too many elements are thrown into the mix, other times the best parts – read: her voice – are just overshadowed.  But when Elvis works, it’s something to behold.

The ‘too many spices’ flaw comes out on Elvis’ self-titled opener, which starts as a strumming, relaxed cool, with some bright parts, but then it brings too many changes to its the second half, going into rock, tech, sweet, and more.  Much stronger is the slow growth of the swaying “Hide”, which gets louder and more effectively ominous, before returning to its slow origins at its end.

More often, the slip-up is in Jihae not letting her vocals take center stage, such as on “Best Thing”; her voice is literally her ‘best thing’, but on that number, as well as the somewhat removed “Fig Leaf” and sadder “Spin”, it gets a little lost in the instrumentation.  Meanwhile, the strongest tracks on Elvis put her voice at the fore, like the melodic and straight-faced irony of “Perfect Lie”, or the winningly beautiful “Stay” and Jihae’s breathy vox.

Not that the musician can’t do bigger: “Pink Sands” gets grand with its keys, while Jihae finishes off her record with the garage-distorted rock of “Birthday Blues”.  But the South Korea-by-way-of-Sweden-by-way-of -Nigeria-by-way-of -U.K.-by-way-of -NYC globetrotter is still at her best when she sticks to her pipes.  In addition to its awesome record title (though people reading that – and seeing Jihae dressed up as young Elvis on the album art – might think she’s from Japan, which is notorious for its love of The King – recent Prime Minister Junichiro Koizumi shared his birthday with the legend, and even did an album of covers of the Presley’s work), Elvis is Still Alive flows right.