Jimmy Buffett with his Coral Reefer Friends along with eight hundred die-hard parrotheads put on the second show of a four-night run at Delray Beach’s Old School Square Pavilion.... 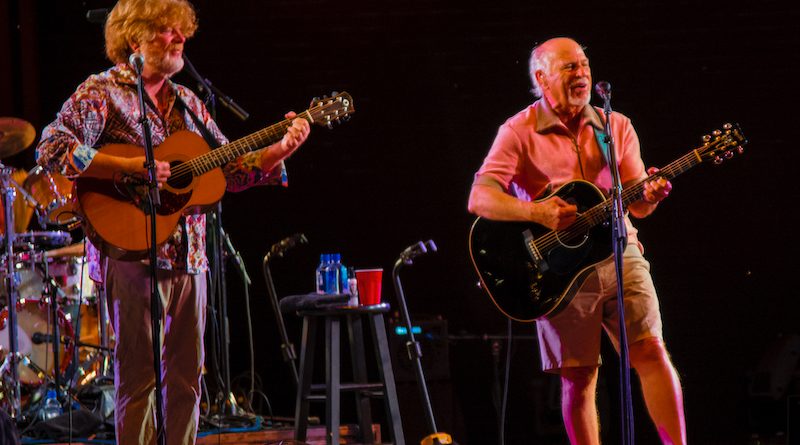 Jimmy Buffett with his Coral Reefer Friends along with eight hundred die-hard parrotheads put on the second show of a four-night run at Delray Beach’s Old School Square Pavilion, a venue that has emerged as one of the nation’s leaders in putting on A-list concerts in a safe and entertaining way, on Friday night, May 14th.

As can be expected in South Florida this time of year, the weather was warm, damp, and drizzly, but that didn’t stop JB’s fans from showing up in their finest parrot and shark costumes with margaritas in hand, to sing along to an evening of his greatest hits.

The five piece Coral Reefer Friends shouldn’t be confused with the much larger Coral Reefer Band. These “old guys,” as Buffett called them, are five vaccinated old Coral Reefers. The band wasn’t the only thing that was stripped down to a bare minimum. The stage, lighting, and video screens were all barely there with the focus being on the band, and the band didn’t disappoint.

Once Buffet finished telling the crowd that, “This isn’t Zoom, this is live,” the hits came fast and furious, one after another. While the crowd sang along to the songs they know by heart, there was a regrettable lack of any deep dive into the archives. You want the hits, here they are, and that’s it. There was no “Abandoned on Tuesday”, “Mobile Days”, or “Don’t Bring Me Candy”, but maybe those songs are best left to the critics and music fans. The crowd certainly didn’t seem to mind or even notice.

The evening started with “Changes In Latitudes, Changes In Attitudes” and continued until the fifth song, “Son Of A Son Of A Sailor”. Following this song things got a pinch interesting, just a pinch, as Buffett introduced longtime collaborator Caroline Jones for “Woman Goin’ Crazy On Caroline Street” and “Cheeseburger In Paradise”. These were followed by two of the night’s most rockin’ numbers, “Grapefruit-Juicy Fruit” and  “It’s Five O’clock Somewhere”. The hits continued for another hour or so until the last margarita and the last mango in Paris were gone.

So, the evening was mostly dry, definitely fun, and definitely hit filled. You came for hits, got hits, and left thrilled. The hits were stripped down, a little more subdued, but still crowd-pleasing. The remaining shows on the tour, including two more at the wonderful Old School Square Pavilion, promise to be more of the same.