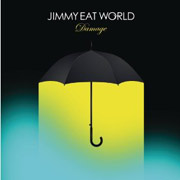 Have you ever listened to one of those albums that is so not good, yet at the same time such a throwback to the albums you love, that you’d rather just go play those old albums than listen to it?  If you are a fan of Jimmy Eat World and identify at all with what was just said, then don’t listen to their new album Damage.

One of Urban Dictionary’s definitions of “b-side” is as follows, “The b-side would be the second and less important side, and therefore usually the less popular and worse song.”  Who would have guessed that they were actually reviewing Damage as a whole as it relates to Jimmy Eat World’s popular albums Bleed American (QRO live review performing Bleed American) and Futures?  This band’s last two albums can be summed up as follows: if you are not going to evolve your sound whatsoever, then at least write songs that measure up to the ones you’re clearly trying to copy.

Are there any redeeming qualities to Damage?  The answer to that depends on who you are.  If you’re a brand new Jimmy Eat World fan and this is your first experience with them, then I apologize for the downer tone of this review.  In your case it’s a decent rock album full of love songs, so enjoy it.  If you are a pseudo-fan, you’ll probably consider it to be as good as all of their other albums, so whatever.  Lastly, if you are a longtime fan who loves Bleed American and Futures, then this album will fall flat and you’re welcome for the downer tone of this review.

There are a couple of songs that are okay on Damage.  Those are the last two tracks, “Byebyelove” and “You Were Good”.  But the only reason they are okay is because they remind you of classic songs like “My Sundown” from Bleed American.  Are you convinced of the pattern yet?

The hard truth is that Jimmy Eat World is a once-great band that is now stuck in the ever-popular rut of clinging to what they once were.  It’s said time and time again, even if your sound evolves in the wrong direction, at least you’re evolving.  Staying in your pocket or ‘safe place’ is not only less respectable, but it makes listeners want to just go back to the albums that made them fall in love with you and not give your new material the time of day.

Jimmy Eat World, if by some chance you ever read this, I speak directly to you now: picture your band’s sound in your heads, now look up the word “departure” in the dictionary.  Now, meditate on that word for at least a year and then make another album.  I don’t speak for anyone else, but you’ve got approximately one more chance.  Please, you’re doing enough Damage as it is…

Jimmy Eat World – You Were Good