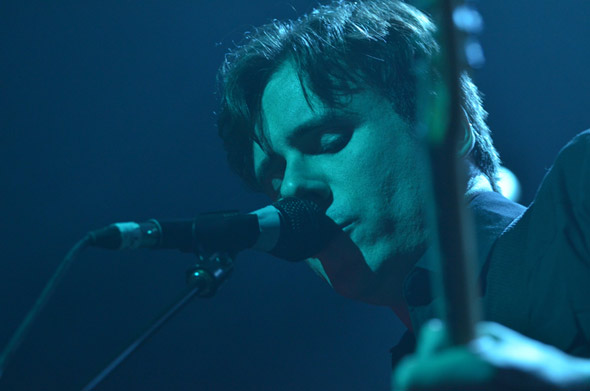 In first of two nights at London’s HMV Forum of a double album retrospective Jimmy Eat World gear up to play 1999’s Clarity and 2001’s seminal Bleed American in full, beginning to end, first aching chord to final blissful note… you get the idea.  For the crowd of twenty-somethings packing into the Kentish Town Forum on Wednesday, June 22nd, these records are among a select few that will define a summer, or the awkward path through their teenage years altogether.  Hearing those albums in their entirety makes this ‘special’ gig is that little bit ‘extra.’

The atmosphere was of mild-mannered impatience as the band finally took to the stage, a fashionably 30 minutes after the advertised time.  They broke into “Table For Glasses” and play through “Lucky Denver Mint” with the crowd warming up as the set went on, singing back quietly to tracks like “Your New Aesthetic” and “Blister”.  There was little pause for small talk by the band and the atmosphere during this first half was a mostly mute air of appreciation from the excited audience.  Clarity is a beautiful record with some great tunes, but it is the album you chill out to in your bedroom, whereas Bleed American is the album you take outside and blast out of the speakers.  Clarity played live is beautiful, but it still feels like a prequel to the main event. 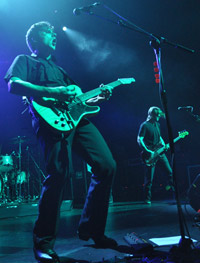 After a short break at the halfway point in the set, the band re-emerged on stage and belted out Bleed American‘s opening track “Salt Sweat Sugar” to a crowd that had woken up from its reverie.  It was a completely different gig from the first half of the set, and as the band stormed through the album the crowd was jumping, screaming, and shouting like it’s 2001 all over again.  In fact, the band looked like they haven’t aged at all since the first time these songs were played.  Tracks like “The Middle” and “Sweetness” sounded as fresh as the day they were penned and Jim Adkins delivered them with the same youthful energy and sincerity.

In an incredibly tight set, Jimmy Eat World offered a reworked version of “Your House” and round off the evening with a short mix of hits from their other albums, including “Pain” and “23”, alongside some new ones.

While for many the evening had been a trip back in time, certain songs like “A Praise Chorus” with lines like, “Even at 25 you’ve got to start sometime,” have new resonance for a crowd whose teenage years are now long gone.  Fortunately Jimmy Eat World are a band with staying power and look to continue to make records that are both definitive and timeless.