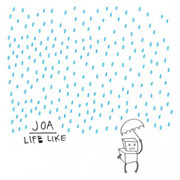 Last year made real a slew of spectacular improbabilities for the Joan of Arc family.  Cap’n Jazz reunited for a one-off tour, and its original lineup, with each member in his mid-thirties, reinforced the timelessness of Analphabetapolothology‘s angst-ridden yet rapturous teenage anthems (QRO review).  Lead guitarist Victor Villareal, capping off his return to music following a solo album, a split 7″ with like-minded math rock bright spots Loose Lips Sink Ships, and a brief Ghosts and Vodka reunion, leapt right from the resurrected Cap’n Jazz to his first-ever tenure with Joan of Arc proper.

JOA subsequently dusted off and incorporated three Owls favorites into its live set, effectively satiating fans’ appetites for an Owls reunion.  This new offering not only sounds like Owls – the finest full-length in the collective’s catalog, reissued earlier this year – but also further unravels the increasingly tenuous threads dividing the many musical identities woven together in the Kinsella loom.  This is a good thing.

Life Like is decidedly Joan of Arc’s rock album, as much as Flowers was their psych record and Boo Human, a highly personal affair in which frontman Tim Kinsella wrestled with the aftermath of his divorce, could be called their ‘breakup’ album.  Previous efforts bearing the Joan of Arc name reached the realms of the sublime only slightly more often than they grated, with moments bubbling up from songs sometimes more alluring than the songs in full.

Oh Brother, an 80-minute monolith the ever-productive collective released last month, is a showcase for such moments, blending improvised instrumentals from four projects featuring Kinsella as a common member.  Life Like, meanwhile, is a cohesive, urgent statement with zero fat, recorded in five days with basic rock instrumentation and without smoke or mirrors.  Oh Brother and Life Like both benefit from this cleaving in twain of the band’s tendencies – electronic experimentation and avant-garde rock, respectively – while “Joan of Arc” evolves into a catchall moniker for Kinsella’s many bands.

Life Like begins with an alternately breezy and punishing beast of a track that is equal parts Make Believe, “Eventually, All at Once”, and turn-of-the-century Dischord Records.  With its Ginsberg-inverting title, apocalyptic, political and existential lyrical themes (“You are real, you are real / Breathe deep / Let the screens go blank and the streets explode in sirens”), and subtle jazz inflections, it’s quintessential Joan of Arc.

It’s also the peak of the album, but the following eight tracks never really leave the summit, unless one imagines the players marching back down the mountain to the strains of the mostly a-cappella closer, the battle hymn “After Life”.  Though he sometimes wanders too far into a raw distorted mess (as on “Night Life Style”), Villareal’s twinkling leads prove the ideal melodic foil for Kinsella’s inimitable croon-and-yelp, and Kinsella is a unique and adept guitarist in his own right, emitting rich tone from his signature Guild.  Bobby Burg’s fluid bass rumbles with capable countermelodies, and Theo Katasounis’ loose power drumming peppers the mix with inventive snare fills, cymbal rushes and booming toms.  Engineering everything is fellow Chicago luminary Steve Albini, whose presence behind the boards enhances the dynamics of and adds immediacy to the recording.  It’s a natural marriage of rockist aesthetics, just as it was on Shock of Being and Owls.  For all its Joan of Arc jaggedness, parts of Life Like are even danceable – Kinsella could conceivably showcase his own unorthodox choreography in a video for the darkly groovy “Howdy Pardoner”, a la Thom Yorke in “Lotus Flower”.

Joan of Arc remains one of the most familial and prolific entities in modern indie rock.  Each new record is a metamorphosis of sound and persona, and as the band continues to share ideas and personnel with other projects, its stylistic breadth both grows and is blurred.  About a decade ago, an anonymous fan spoke for Joan of Arc’s entire following: “We love you because you don’t rock!”  Perhaps Life Like will render their affection unconditional.