Sometimes you see a show and walk away admiring more than the musical talent.... 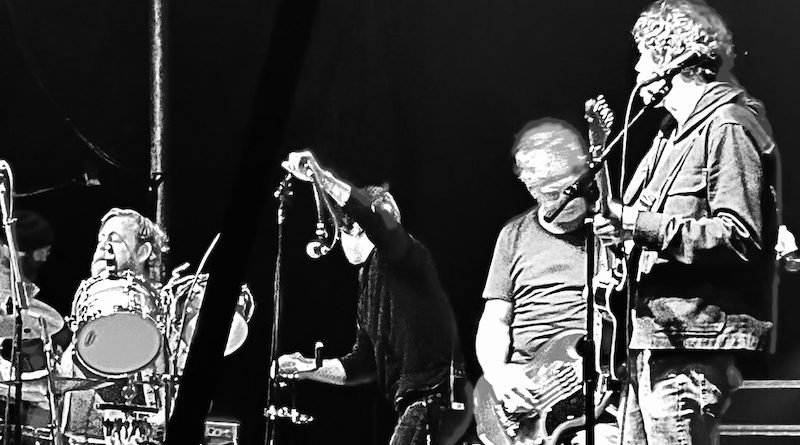 Sometimes you see a show and walk away admiring more than the musical talent. There are some nights where it feels that you’re subtly being told a little story in the set list. And those nights are always especially enjoyable for me. Almost heavenly, if you will. I have to believe that the veteran members of supergroup Joe Russo’s Almost Dead were consciously crafting Friday, September 24th’s setlist at Salvage Station in Asheville with a theme in mind, and I hope I do their creativity justice by telling you what I heard in between the lines.

JRAD figured “Might as Well” and opened with that cover which they’ve only played once before in ‘19 at House of Blues Dallas. It was a treat to hear them bust this rarity out and the railroad theme was especially fitting for Salvage Station’s location on the tracks along the French Broad River. “Never had such a good time in my life before / I’d like to have it one time more / One good ride from start to end / I’d like to take that ride again…” Next up was “Hell in a Bucket”, which is one of only 14 songs whose credits include Brent Mydland (out of the 500+ songs the Dead have played). “But at least I’m enjoying the ride…” Hmmm. I see a theme forming. Perhaps inspired by the nearby Cherokee Casino, the band slid into a soulful rendition of “Loser” afterward. A scathing “The Eleven” then led into a rocking “Beat It on Down the Line”. We segue way from this ditty (that’s not only about trains, but also about a coal mine) into “Cumberland Blues”, which is of course about the Cumberland Mine (that had its own railroad). Choo choo.  Perhaps only Johnny Cash loved singing about trains as much as the Dead did.

Set Two kicked off with “Magnificent Sanctuary Band”. So many songs have a new feeling considering the pandemic, and that held true for the line “The multitudes of people dying / Cause they won’t see and try to understand.” But I digress… “Casey Jones” then picked up on the train theme again. If you had to park down the street from the venue and walk back and forth on said tracks, this train theme was more meaningful for you. Just sayin’. The song up next, my beloved “Brown-Eyed Women”, had me thinking about its time period. “1930 when the wall caved in” was also when Asheville’s Central Bank & Trust closed, and ruin descended on Buncombe County. The ensuing debt meant that the town couldn’t afford to build new structures. This halt on new buildings is the reason our downtown is such an architectural gem today (#TheMoreYouKnow). The choice of “Lost Sailor” after seemed another fitting choice for Asheville. What other town would also refer to Sirius as the “dog star”? It was during “Saint of Circumstance” and “This must be heaven / Tonight I cross the line” that I had the idea of “almost heaven with Almost Dead.” Of course, there’s nothing “almost” about this group of literal rock stars. Just Dave Dreiwitz’s bass had me walking around last night repeatedly imitating the “wow wow wow” sound until I sounded like Owen Wilson. Tom Hamilton has a unique way of making you feel he’s singing the song just to you, somehow. Scott Metzger plays as if he was born to be a member of the original Dead. Watching Joe Russo and Marco Benevento’s back and forth, after seeing them years ago as the Benevento/Russo Duo, is fascinating in this cover genre. If listening to the Grateful Dead is like drinking a glass of whiskey, then listening to JRAD is like downing absinthe. Straight into the rabbit hole for an experience you only thought you knew. Anyway… Wouldn’t you think they picked “So Many Roads” for the whole vibe of “Mountain high, river wide”? How perfect. The set closed with a fire “Not Fade Away” and then we caught our breath for what was up next.

The encore, like the opener, consisted of a song they’ve only once played before, also in 2019. Neil Young’s “Everybody Knows This Is Nowhere” was only ever played before at the Capitol Theatre and seems like a motto for our town. We’re this tiny burg in the middle of the mountains, that seemingly everyone somehow knows about. Especially come the pending “leafer” season. But you don’t mind the crowd of tourists because “Every time I think about back home, it’s cool and breezy.” Every time I think of this show, I can just feel the river breeze, hear the crowd, see the smiling faces, and smell the food (shout-out to the Root Down Kitchen). And honestly, it feels almost like heaven. To me.

Thanks to the fine folks at setlist.fm for some of the data provided above. All errors are strictly the author’s and will surely be heard in the comments.