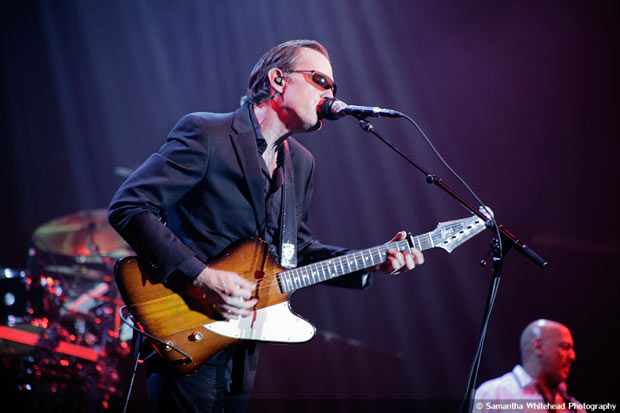 On November 2, 2012 at 8:00 P.M. on the dot, God said, “Now,” and Joe Bonamassa strode casually onto the stage carrying one of the countless acoustic guitars he owns.  Upon the stage was an empty chair and a low-slung microphone, and there Joe sat, ready to deliver the finest musical performance the Kansas City Music Hall had ever seen. 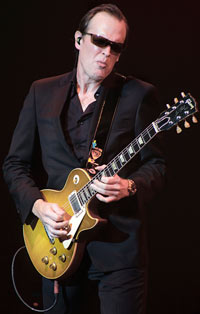 Beginning with a five song acoustic set is a new trick for Joe, and carries some bittersweet implications with it.  His song selection, which included “Dislocated Boy” and “Driving Towards the Daylight” – songs that may have been better suited for his electric full-band lineup – was well-balanced and most notably contained an abbreviated version of “Woke Up Dreaming”, a song that previously rambled well past the ten minute mark.  The pointed lack of an acoustic shred-fest wasn’t actually a bad thing.  This allowed the more content-heavy songs like “Seagull” and the aforementioned “Driving” to have a more profound effect on the audience.  Bonamassa was, in effect, letting the songs speak for themselves.

Following the acoustic set, the lights dropped down to nothing and Bonamassa’s band took their places on the stage.  When the theatrics resumed, Bonamassa stood facing drummer Tal Bergman and hammered on the opening line to “Slow Train”, as if to say, “What acoustic set?  I have no idea what you’re talking about.  That didn’t happen.”  The man’s ecstatic, devious smile could be seen from all the way back in the cheap seats where the lowly journalists are kept. 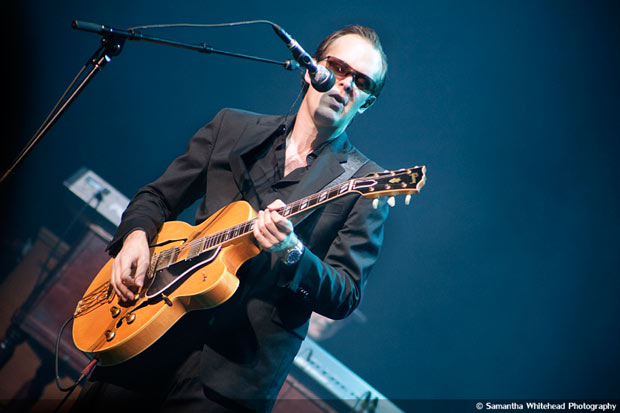 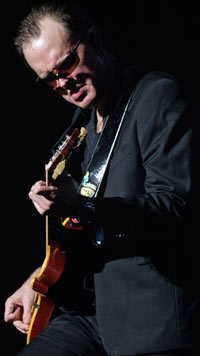 It goes without saying that Joe’s guitar work was, as always, unprecedented.  One suspects that Mr. Bonamassa is, in secret, a minor deity of some sort.  This is the only explanation for his total mastery over the instrument.  Les Paul after Les Paul passed through his hands, and he made each instrument work for their made-in-the-USA price tag.  Following “Slow Train” and “Dust Bowl”, Joe delved once more into his latest album, Driving Towards The Daylight, and paid tribute to Howlin’ Wolf by covering “Who’s Been Talking”.  Every heart in the auditorium skipped a beat.  For a moment, it appeared Bonamassa was covering Zep’s “Whole Lotta Love”.  That, ladies and gentlemen, would have been enough greatness in one place at one time to bring on the 2012 apocalypse.

After that, Bonamassa went ahead and got his Gary Moore fix, belting out “Midnight Blues” like nobody had ever heard it before.  The man’s ability to make himself sound like everyone else thinks they sound has served him quite well, and makes even the most straight-forward blues tunes stand out as unequaled masterpieces created by Bonamassa.  Add Moore’s songwriting to the mix and you’ve got an emotionally charged moment you’ll never forget. 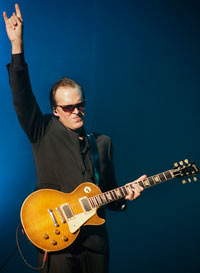 Watching Bonamassa work the solos of each song made it easy to see that this is the type of performer that loses himself in his evocation so completely, you’d think he’d have a psychotic episode after each show.  So passionate and technically terrifying is his playing that seeing a journalist-shaped shadow burned into the theater’s back wall wouldn’t be surprising at all.

Bonamassa made a salute to Chuck Berry, breaking out an old Gibson jazz box and performing “The Wee Wee Hours” and “Carol” back to back.  These two songs, followed by the dirtiest, nastiest, sexiest version of “Look Over Yonder Wall” ever played, seemed to temporarily sate Bonamassa’s blues craving for the evening.  He closed his set with “Young Man Blues” (a hard rock song if ever there existed one) and “Mountain Time” before exiting the stage.  Only after an eternity of undying applause did Joe and his band retake the stage for “Sloe Gin” and “Just Got Paid”.

What you’ve got to understand, ladies and gentlemen, is that Kansas City really, really knows its blues.  Acts like Samantha Fish, Trampled Underfoot and Ida McBeth call this city home.  The KC home crowd is very difficult to impress with blues content.  We’re jaded in that way.  Anyone in this city can truck off to BB’s Lawnside BBQ on a Tuesday night and pay four dollars to see one of the best blues bands in the country like it ain’t no thang.

That being said, Joe Bonamassa left Kansas City, Missouri that night having accomplished a great feat.  The man proclaimed himself king, sat on the city’s throne of blues, and made it known that the genre belonged to him.  Unlike so many feudal warlords (make no mistake – that’s what musicians are) before him, Bonamassa’s performance was greeted by the masses with thunderous applause.  The blues may belong to Kansas City, but Kansas City belongs now to Joe Bonamassa. 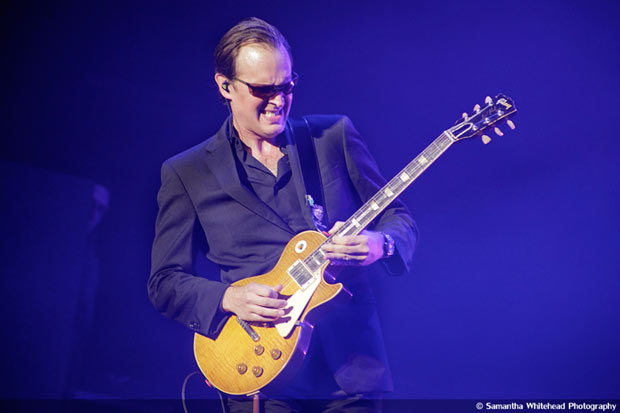